A Reply to Roblox's Response

(note: This is my more complete reply to Roblox’s response to overwhelming developer feedback, I recommend you read their post first.)

In response to Developer’s Feedback on Developer Exchange Announcements

The information in this post may be outdated. Please reference our support documentation and FAQ on DevEx or visit the Developer Economics page for more information about monetization.

(My original post will be edited later, but will mostly link to this for updated information.)

First of all, let me say that I am very grateful for the rapid response @baublebi gave on this issue. Sometimes it feels as though Roblox isn’t good at listening to the community (mostly due to a lack of tangible responses) so it always great to hear from somebody!

So, thank you!
Now, the less pleasant part of this.

The response wasn’t as transparent as I (or many other developers) would have liked, I have to dispute a few of the points given, and hopefully at the end we can all agree to some solutions that actually make sense for both sides of the problem.

In response to Developer’s Feedback on Developer Exchange

Comparing 25 percent to 75 percent doesn’t feel good - we agree! The challenge is that is not an accurate representation of where the costs go, and that’s on us for not clearly articulating. To that point, over 24% of what we collect goes to pay app stores and payment processing engines; over 25% goes to costs associated with hosting games and providing platform-wide customer support and moderation; the 26% remaining funds all the work we do on our platform as well as support our developer community. We’ll do a better job of articulating this in the future.

First, These numbers are too vague, but I later realized something else.
This seems to assume that Developers and Roblox have the same source of income, namely through Robux. But that isn’t true. While Robux might be a major source of Roblox’s income, it’s certainly not their only source. 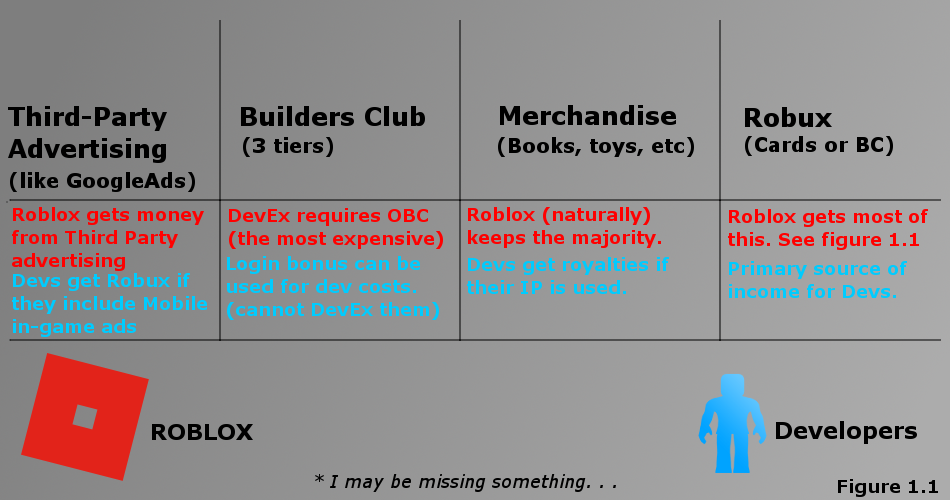 As you can see, Roblox has several sources of income. And while developers have some chances of utilizing them as well, it’s mostly geared to giving Roblox the most benefit. (Final point, Devs get their pay in Robux, and have to go through DevEx to be Really Paid) 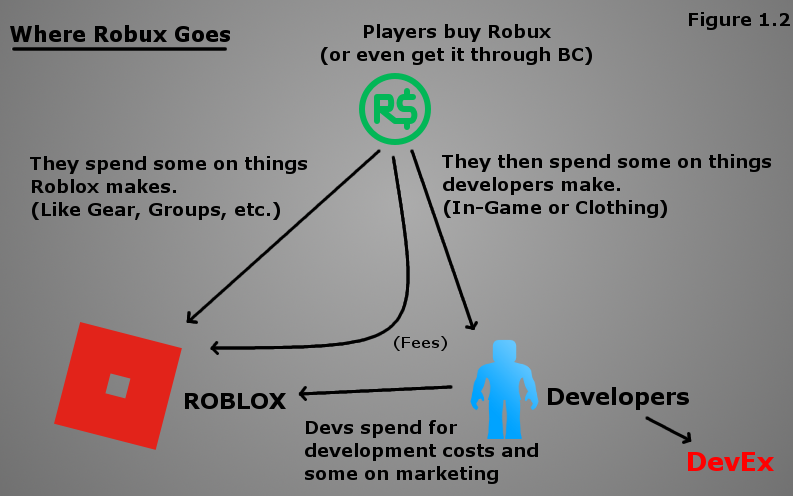 2793×496 264 KB
This is an Incomplete graphic, but it shows that Developers don’t get most of the Robux and then give 75% to Roblox corp.
Roblox has put various features (Things for Players to spend on without Devs being in the way), and then you have the prices that developers pay just to get their game made (or to be paid) in the first place.

Also that pesky Marketplace Fee that some developers have said we’d be better off without. This is from the Wiki. 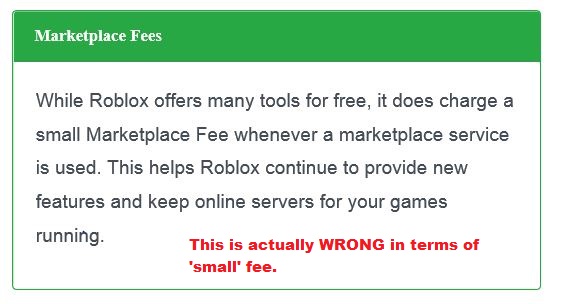 My brother @bad_wolf317 is a case in point, he had some Robux on an older account (about 50) and he wanted to transfer it to the new account using dev products. He did it and TURNS OUT, he got 5 robux.
That’s a whopping 90% of the funds!
And appearntly this is what anybody who doesn’t have BC gets out of their Robux (so you can’t just buy OBC whenever you’re ready to cash out. You have to keep paying them if you want more then 10% of the robux You Earn!)

Developers are shifting to other platforms

Maybe Roblox thinks this is going to be a natural progression of things, where Developers start out on Roblox then move on to the big opportunities elsewhere. But I doubt that. That sounds more like the old Roblox platform, before DevEx, when it was all about learning coding or playing with physics. Now Roblox wants to be a genuine Gaming Platform. They want to change their image of a virtual playground to a Game development system.

But Roblox is currently running the risk of losing developers, at least partially, to other platforms. I mean, at best, Devs will have a presence on Roblox while attempting other engines and storefronts where they think they’ll be treated better.

That’s one of the big reasons Devs are comparing Roblox to Steam or the Epic Game Store (or Even Discord! Thanks @Profess_ional)

A lot of developers had a lot of good ideas for fixes. And I have to agree with them. Whether it’s making the platform costs more optional, or even increasing the number of tiers for cashing out, there’s a lot of little ways Roblox can improve their system.

This topic was automatically closed after 7 minutes. New replies are no longer allowed.

A post was merged into an existing topic: Give developers a fair DevEx rate