In the ‘Animation Editor’ when removing the ‘LowerTorso’ track usually this results in no animation being played for that specific joint thus allowing other animations to influence the movement on that joint with no issue.

But when keyframe curve editor is enabled this function goes away because on playback both in-game and studio the ‘LowerTorso’ is not treated as an “unanimated” joint. Rather the animation without the ‘LowerTorso’ track still animates the LowerTorso to have a position and rotational data of (0, 0, 0).

I disabled the curved editor as a whole… As this was also my issue. Sadly no smoothing applied now

Hi there, thanks for your report!

Just to make sure there is no confusion, are you reporting an issue with the way the animation plays both in the ACE and in-game (ACE, Studio and client), or in-game only (Studio and client)?

Hi the issue only happens In-Game only (Studio and Client).

The ACE playback is fine

Basically - the LowerTorso should NOT be animated it should be left alone / ignored.
BUT if you export w/ the curve editor enabled - this results in the ‘LowerTorso’ STILL being animated by the animation exported DESPITE still not having a ‘LowerTorso’ track in the animation asset.

I’d assume this is an issue due to the breakdown of the CurveAnimation instance. Despite not having a Vector3Curve or EulerRotationCurve, LowerTorso and UpperTorso are both animated as if they exist as empty tracks in the animation. This basically makes the curve editor useless for any upper-body or lower-body-only animation. See images below: 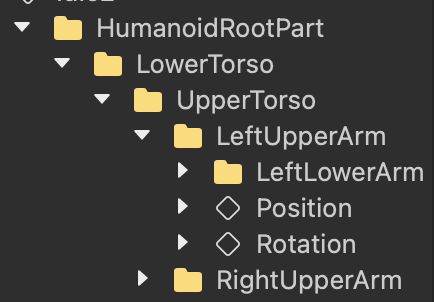 In the animation itself, the tracks exist, only to build a hierarchy for the animated tracks. But even though the elements of the hierarchy without any rotation/position data (LowerTorso and UpperTorso) are still animated in Roblox itself.

Been having this issue for months, it was reported on the initial release post and still there has been no advancements. Is this ever going to be fixed?

This issue should now be fixed. Thank you for your reports