I just honestly have a question.

I just made a Subway and renamed it to Sabway, though I used images from the official Subway but I do not have any of their official name in the images.

Though, I did use some colours for Subway, and I did reuse the same logo but change “u” to “a”.

Do I have to change anything or am I fine?

Yeah you probably should. Subway might take your game down, since it uses the same logo but just with a single letter. Maybe change it to something original, or just use the generic “ro-” prefix or “-blox” suffix to make Roway or Subblox.

Should I change the colours too?

There have been instances of actual companies copyrighting places on Roblox. Some I can think of off the top of my head would be Starbucks, Panda Express and Hilton Hotels.

You might be able to get away with it if you changed a bit more things. NewRyanPlays gives some great examples.

That kinda depends, but if you wanna play it safe you could tweak the colors a bit.

You should be fine for a handful of reasons (subway isn’t the type to send DMCA claims, the logo is modified to be not subway, it’s unlikely subway would even know that existed anyway)

However, if you want to be absolutely certain you won’t get claimed, change up the name entirely. Logo style can remain the same (as in, keeping it identical stylistically to the subway logo) however the name has to be different.
Any time I see a game that would otherwise have copyrighted content, all the brands and such are replaced with similar/identical looking bootleg names. One good example of this is Backstretch Battles where all the common brand names on liveries are slightly modified (FedEx becomes FedUp, M&Ms become N&Ns, so on and so forth)

An original idea would be shuffling up the letters for comedic value. A classic example of this is quite literally the namesake of r/sbubby 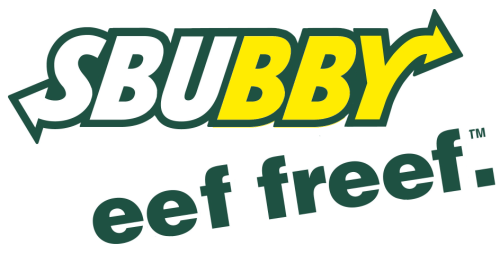 In short, it doesn’t need to really be much of a name as long as it doesn’t say Subway