Has anybody actually been promoted?

Welp. I guess it’s my turn to point out some flaws in what you just said.

I’m not going to repeat anything that @buildthomas said, but I’ll sum up some things that he didn’t.

To answer your question: Yes. People besides LuckyTux have indeed been promoted.

I can name half a dozen people off the top of my head. I’m gonna save myself time and just link you this to show you the influx of Full Members.

He posted a helpful guide for other New Members, but an official guide from a Top Contributor or Staff would be much appreciated.

That’s unnecessary. My guide struck all of the points that could have been addressed. Complaining that there isn’t more of the same is foolish.

I see numerous New Members who have been posting actively in #development-support for months who deserve to be promoted but have not been.

It took me six months of daily work like that to get promoted. You are not entitled to a rank up. Nor was I, nor is the friend you recommended. Please do not act entitled.

It took me six months of daily work like that to get promoted. You are not entitled to a rank up. Nor was I, nor is the friend you recommended. Please do not act entitled.

This. Exactly this. There’s a quote I remember by heart from one of my staff sergeants, and it’s “Never take less than you deserve, but never expect more than you’re willing to work for.” You always get what you’re meant to get if you try hard enough. Don’t say that you deserve a promotion, or that guy doesn’t, or that this guy was active every day; they’ll get promoted when they’re ready. Promotion isn’t just about answering questions; it’s about contributing to the entire forum, actively reading, and overall showing you’re adept with using and navigating the forum.

I got into the forum in the first wave of new members, roughly in November 2017. I was about to apply again, roughly 7 months later, then I noticed that you can’t apply to be promoted anymore. Shortly after, I had been promoted, because I was active, tried to contribute to development support, knew the rules of the forum by heart (if you don’t know rule 15.1 by heart, you aren’t a true forum member /s), and overall showed that I was knowledgable of how to use the forum.

I was looking at this link you linked, and I saw the person @jjjakey. And here was his stats/ 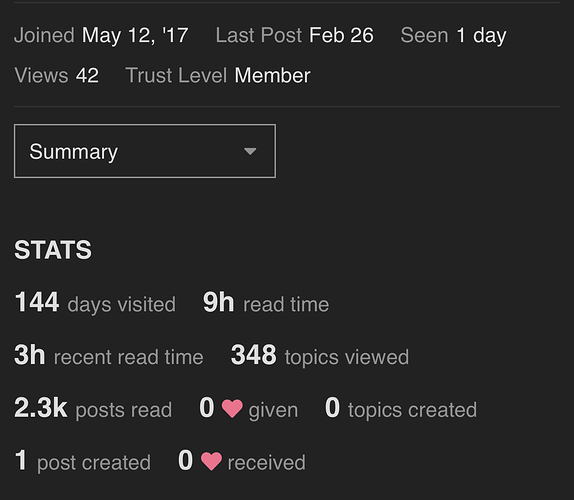 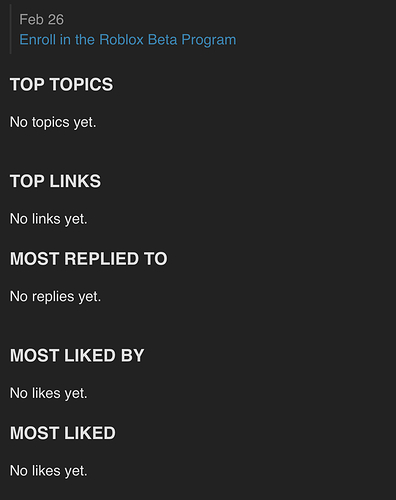 What could this man have done to get promoted!? He basically did nothing!

May 2017 was before the New Member programme.

Whoops, had a brainfart. Forgot join date wasn’t when you got accepted.

He was accepted into the 2019 Summer Accelerator Program

Let’s compare the stats of the friend you referenced to mine. It seems like a fair comparison since I am one of the newest Full Members (being only promoted in January). 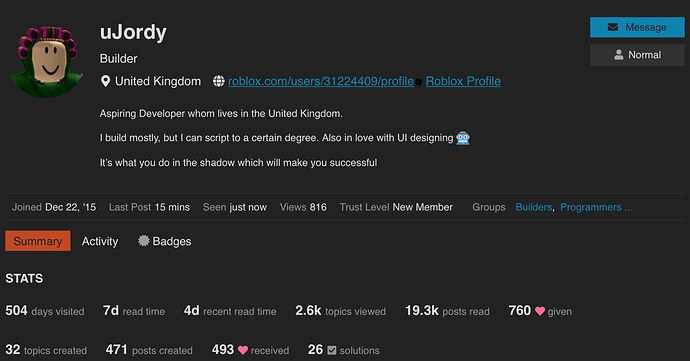 As you can see, Jordy does in fact have me beaten in some areas. He’s got nearly a year and a half of visiting (compared to my year) and 3 days more read time. He far exceeds me in solutions. On the other hand, I’ve given and received far more likes and created more topics and replies.

At a base level, Jordy could easily be explained as being a far better contributor of the devforum than myself; however, the numbers aren’t what matter right here. What matters is the seriousness of the contributions. As I mentioned in my article, that you already linked:

Helping can be done in different ways and each type of helping effects different groups of people. However, the biggest impact can be done through writing articles.

When looking closer at the less emphasized stats, you can see the problem.

Comparing the first stat block (Jordy’s) to the second (mine), you can see the difference of contributions. Jordy stayed on far too small of a scale and didn’t use his gifts and talents to actually help the community as a whole.

Nonetheless, I will personally be contacting @uJordy offering to help him with his request for Full Member. He is definitely proven his value on a small scale, but not at a pace noticeable enough by the higher ups without putting himself out there. It’s a negative of being a “behind the scenes” guy, yet it doesn’t prevent him from ranking up.

This is something very kind, it’s making me cry
But, I’ve seen many people with closer stats to you than @uJordy
(no offense) and still are a new member. I like how you are looking out for active people.

I’m actually surprised you’re not a member. I see you everywhere, you seem to be very active.

Thanks,! I’ve seen you in a lot of places also. You have some good topics, close to Headless, so, you should be noticed for promtion, considering in one of your topic a LTC noticed you and the topic.

Uhm, I think you should blur out your email in the picture of your profile!

So the real secret here is just consistency?

That would be 100% correct my good sir. Consist, appropriate, good contributions.

Hi, I’m an Accelerator and I’ve been on site at Roblox HQ for close to 3 months months now. I was added as it’s important for me and my work to view the information as a full member.

So to answer your question, I did do something.

Sorry if I offended you by saying you didn’t do anything. You and other people explained it to me.

Is there an update on the new promotion procedure?

Nope. There will be an announcement when it eventually ever happens.

I was promoted to member in October 2018. Continue contributing to the forum, such as tutorials and bug reports. It often takes some time but if you contribute consistently, you will become a full member.

Sorry to rebump this…? But as far as I know, the requirements are to visit 50% the site of the most recent 100 days. Have a sufficient amount likes on replies, topics and etc.