How would I use a mesh as my character?

Recently I used blender to create a low poly mesh to use as a character in a game. After importing it into Studio, I didn’t know how I would use it. 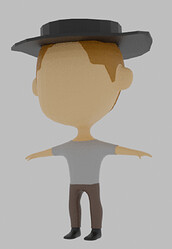 I thought of creating my own movement and camera script (which I created both), but the movement script wasn’t that great and it only worked with pc so I decided to leave this idea. I also tried parenting it to a model named “StarterCharacter”, and I set it to it’s primary part. Of course, the mesh wouldn’t move and the output was saying that I need a basic component, a humanoid. After adding one and retesting, the output said that the game couldn’t find the torso, legs, hands etc. (the parts of a default roblox character).

Do you guys have any idea on how I would approach this and use this mesh as my character?
Thanks
-Yolo

Boosting this because it has been 18 hours without a reply.

Have you tried putting a mesh inside the HumanoidRootPart, turning off the LoadCharacter property in the Humanoid, and then setting all the limbs to be transparent?

I will once I get home. Thanks for the advice!

There isn’t a LoadCharacter option in the properties. Do I need to access it through a script?