On Roblox currently I feel that the group search feature could really be improved, at the current point in time their is around 6.3 million groups so I’m not expecting a miracle fixture but what I would like to see is if I look up a specific phrase I get more relevant results.

Here is an example of what happens when you search up “British Army” in the current search system: 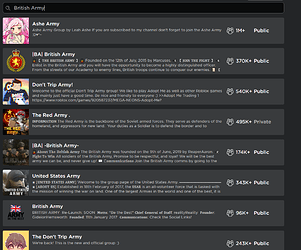 With some of these, I can understand why I might be interested - United States Army or the Red Army for example - if I’m looking at ro-military. However what I don’t approve of is my top result was “Ashe Army” which isn’t even relevant to my actual search. Don’t get me wrong, some people will want to be involved with that but why would I want it as my top result?

Now to really iterate my point:

I looked up French Army, now this was disappointing: 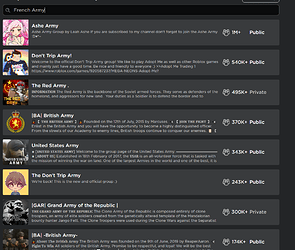 I didn’t see my first group with anything to do with “French Army” until page 7. And for those who might complain that people most interested in these are likely to be French so they’ll have a French name… 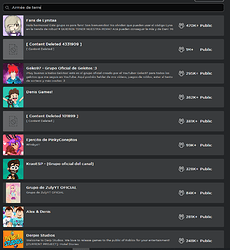 I use to remember back in 2015 when you searched up a group and it actually gave you a list of key term relevant groups.

A post was merged into an existing topic: Group search should match whole query before matching individual terms