I’m the game’s developer, FirstVertex. Based on a few requests from real players, I’ve prepared this guide to help you get started quickly, and be successful playing the game.

Link to the game 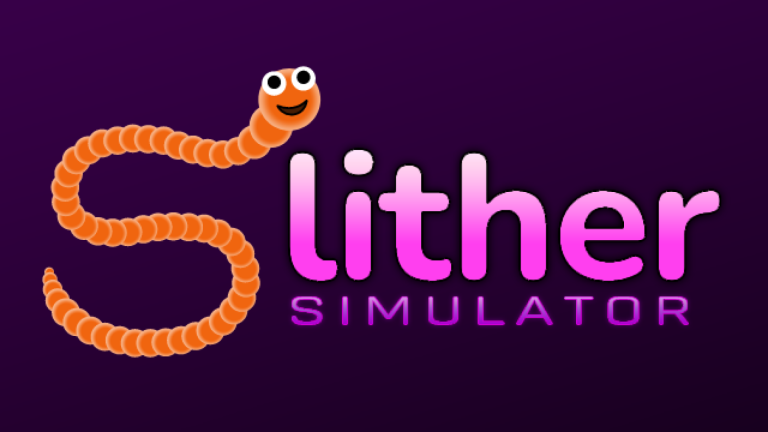 Slither Simulator (“Slither Sim”) lets you play Roblox as a snake that gets longer by eating food found in the arena.

Only problem? There’s lots of other snakes trying to eat the same food at the same time!

When your nose touches other snakes, your snake will die. You’ll have the option to revive your snake, or start over with a new snake.

So drive your snake carefully, and be cautious at first. If you see other snakes, steer away and find food to eat, until you can grow bigger.

To be successful in Slither Sim you’ll need to master the Boost and Brake.

When you apply Boost, you go faster and your snake will light up, so that other snakes can see you using your Boost.

And when you apply Brake, you slow down and your snake will light up with a red tint.

Boost and Brake only last a limited amount of time, and they need to cool down. So usage of these abilities becomes very strategic.

Observe other snakes, and try to determine if they have used all of their Boost. Then, time your attack when your Boost meter is at maximum, while your opponent’s is depleted. You’ll be able to wrap around their nose, taking advantage of the time window where they aren’t able to quickly respond.

When you drive a car or a bike, you can turn more sharply if you apply the brake at the same time. The same applies to Slither Sim! To turn very sharply, apply your Brake at the same time you turn. You can even fold your snake in half if executed with good timing!

The art of the Wraparound

Before long, you’ll discover one of the most important strategies, and that is wrapping around other snakes, cutting off their ability to escape and maneuver.

Eventually, entrapped snakes will have to give up and collide with the edges, leaving lots of food for the victorious snake to devour.

Learning to recognize opportunities for a wraparound, takes some time to develop. Start out by sizing up your opponent: are you big enough, and are they small enough, for you to be able to enclose them?

You’ll see snakes pacing each other, sizing each other up, and running parallel. They are trying to out-boost each other and get in front of the other’s nose. Eventually, one will have to turn away, or risk collision with the other.

In addition to enclosing other snakes with your body, you can learn to strategically use the edges of the arena to also effectively seal off other snakes from being able to escape. Take a look at this Rank 1 snake, wrapping around a Rank 17, using the edge. Amazing! 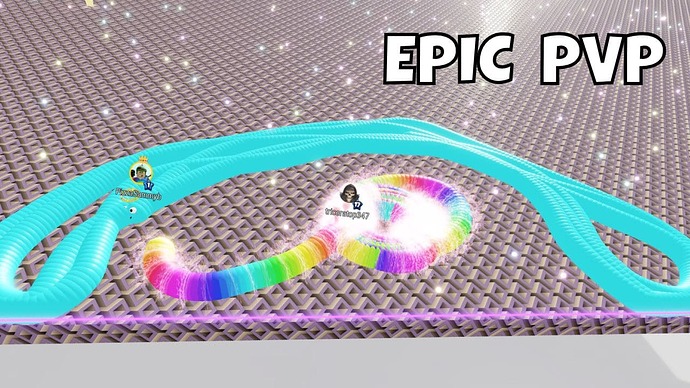 Avoid touching the edges of the arena for very long. Snakes longer than 200 length, which touch the edge for more than 3 seconds, receive a penalty of -5% length each few seconds.

But, you can safely touch the edges briefly, without penalty. You can use this to your advantage to create a boundary that other snakes won’t be able to pass through. “Bounce” your nose off of the edge, and then proceed around another snake. Using this strategy you can enclose bigger snakes, with less length.

When you spawn, your snake is protected by a light blue shield, and you see the meter at the bottom count down until your shield expires.

Other players will also be able to see your current shield level in the readout that appears above your head.

Learn to read the graphics above other snakes’ heads, which includes a light blue ring that counts down when they have a shield.

If you watch their shield meter, you can safely pass through any snake that has a shield without dying.

It’s important to look around when you first spawn, and make sure you’re not enclosed within another snake. If you are, use the time window you have with your shield on, in combination with your boost, and steer yourself out of harm while your blue shield meter is still active.

Some players report they have difficulty moving on mobile, while others report it works great. I have tested extensively on handheld and tablet devices, and there are a few key things to note:

Like most Roblox games, a fair amount of good camera work will go a long way towards success. Make sure to zoom out far enough to see other snakes in your area. Pan around and be sure to watch the area ahead of your snake, to avoid getting into too tight of a corner that you can’t turn out of.

As your snake gets longer from eating more and more food, you’ll notice that you can’t turn as tightly anymore. Larger, more massive snakes, have a larger turning radius. Smaller snakes are more maneuverable and can take advantage of larger snakes’ inability to quickly react.

On Xbox, use the right and left triggers to zoom in and out, and the right thumbstick to pan the camera.

Now that you know the basics of how to play the game, you need to understand that this is also a “Simulator” game.

That means you’ll start out slowly, and with only a small amount of powers.

As you continue to play, your powers will increase, and so will your ability to dominate the arena.

The key to quickly progressing to better and better abilities, is the Rank system of Slither Sim.

As you play the game, you earn gold for each food eaten. When you start out, at Rank 1, each food is worth 5 gold.

As you progress through the game, and end up at Rank 20, each food at that point will be worth 195 gold!

When you earn gold, you’ll notice the blue Rank meter also filling up.

When it has filled, a red exclamation point will appear. That means you have enough gold to unlock the next available Rank. Click it to open the Rank-up screen, and there you’ll see all of the benefits listed.

When you increase your Rank, your other abilities will also level up. These include:

When you progress through Ranks, you will also unlock cool special effects in the Customization area.

Notice the Blue star above other snakes in-game, that displays their current Rank. Keep in mind that higher-ranked snakes have much more advanced abilities than lower ranked snakes, so it’s best to avoid or steer away from those with higher ranks, until you’re ready to challenge them.

The choice will be yours, how you spend your gold. But this developer recommends to new players to upgrade Rank first, and worry about special effects later.

There are a few great choices for simple special effects, to get started, that are reasonably priced. Save the fancy upgrades for later, after you have Ranked up your snake to max level.

Snakes at max level earn gold much faster and will be able to afford really cool effects that seem out of reach to new players.

Be patient, play the game, move up the Ranks, and after a little time, you’ll be able to afford most of the really cool upgrades in the Customize section, without much effort at all!

In addition to gameplay, Slither Sim lets you express yourself with a totally unique snake that you get to design.

From the home screen, press “Customize”, where you can equip visual changes in these categories:

When you see other snakes that have special effects, remember that the effects will not cause your snake to die. Only contact with the actual snake’s body, will cause death. Special effects like particles, trails, legs, scales, or mandible, are not “collidable” and can be safely ignored. 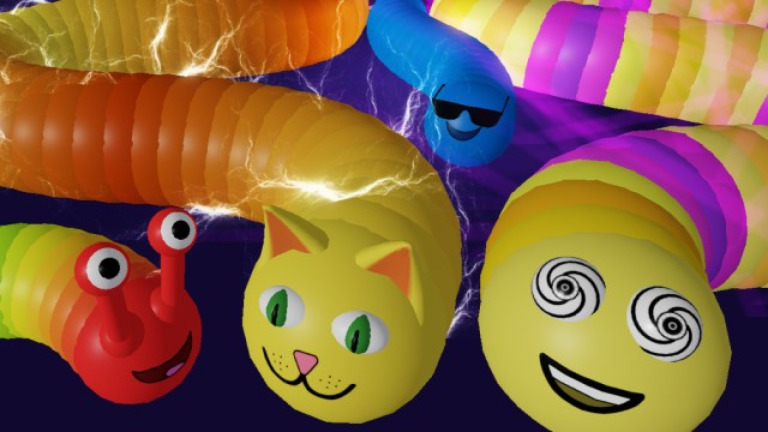 New players will receive 3 free Revive Donuts. These special pastries can bring your dead snake back to life! Use them wisely.

For example, if your snake of 20 length dies, it’s probably best not to revive, but just start over. It only takes 30 seconds or less to regain that length.

But if you carefully built up a snake of 1,000 length, for example, the Revive Donut would be a good choice to restore that progress and keep going!

Restarting your snake, is not a big deal, so don’t worry, all of the top players and myself included, get killed all the time, and do not revive, but just start a new snake over.

It really doesn’t take long, before you can build right back up to your lost length, and beyond!

Free Revive Donuts are dropped in the arena every few minutes, so be on the lookout, and be the first to race to pick up the Donut if you see one! Each snake can hold a max of a dozen.

From the Home screen, check out the Leaders for this Month, or All-Time. Leaderboards have 3 categories: Kills, Longest, and Hungriest.

Notice the shields next to the ranked players’s names. These will also be visible in the arena, above their snakes’ heads.

So if you see another snake with a numbered pink shield overhead, watch out! They are a world-ranked top snake killer, and could be dangerous and aggressive! Best to avoid them, or, slither up and see if you have what it takes to wrap around them! Beware though, you’ll be at a disadvantage unless you have Ranked up your snake to maximum!

In case you don’t want to grind for an hour or two, you can easily get to max Rank and more, with one of the many Gamepasses available in the shop.

Double Gold, is an especially valuable perk that is available, and will allow you to cut the time in half, that it takes to reach max, or unlock cool effects.

Or, just express yourself with one of the many cool Effects or Emotes passes you can find in the shop as well.

There are some really cool special benefits for Premium players, in Slither Sim. I’ve crafted a luxurious gold color and gold aura that only Premium players are allowed to use. It is equipped, by default, for all new Premium players that join, and can be unequipped and re-equipped at any time. You only have to join once as a Premium member, and the gold coloring and aura are yours to keep forever! You also get free Gold, Donuts, and an Emote token, so this is a great deal for Premium Roblox players to take advantage of.

Private Servers are and always will be FREE on Slither Sim! So you can have a chance to enjoy playing the game without worrying about other snakes.

Of note, however, is that in Private Servers, there are no free Revive Donut drops, and leaderboard entries are not written.