Complete 100% support this. Discord has been a huge part of my Roblox developing experience for me, as its been used by me in order to contact both developers and fans alike in massive numbers. If discord were not around today, I doubt I would even be in the developer mainstream right now. All they have done by closing out discord on the Roblox website is, like berezaa said, harm the community as a whole.

Huge support on the post @berezaa: very well said. Hopefully some sort of change is made, but…who knows.

A lot of people are bringing up edge cases where developers have moderation teams and bots to keep the discord under control. These instances won’t be considered by Roblox however as this argument leaves out ALL the abusive discord’s that can be easily made by exploiters and people that want to take advantage of others. It’s nice and all to see that your discord’s are moderated but that does nothing for the argument that we should be allowed to post invite links again.

Yeah, that’s live stats. RoVer does have 373,927 verified Discord users and RoVer’s total reach is somewhere like 33,349 Roblox-related Discord servers (including past servers, deleted servers, and self-hosted versions). I’m not exactly sure what sort of coverage RoVer has of the entire Roblox-on-Discord space, but I’d guess that the majority of users are still unverified, since there are still hundreds of new users verifying themselves each day through my service.

If I had to guess, I’d say that there are at least 2-3 times as many total Roblox users on Discord than are verified in my system. Maybe even more than that.

I feel like Roblox’s stance on Discord servers is largely preemptive. Maybe Roblox even sees Discord as a competitor being another gaming social platform, and by keeping users on the Roblox website they retain control of those users? Weird if so, but it’s possible. Roblox doesn’t really offer rich enough social features to compete with Discord (and I don’t want them to, either).

IIRC, Discord was banned around a time Roblox was receiving a lot of bad press. But sensational journalism will always find a way to write websites like Roblox in bad light – it’s how they get their clicks. “Your kid is playing this dangerous game online! Stop them before it’s too late!”. It doesn’t really matter what Roblox does, even if we could only speak in menu chats, there will always be articles like this written. I wish we (actual Roblox users and developers) didn’t have to suffer as a result.

A lot of good feedback here. Keep it up and keep the thread on topic, this constructive feedback is useful.

As stated in Reminder Regarding Permissible Links

“We understand the argument can be made that YouTube, Twitter, and Twitch all have similar policies regarding users under 13, but these platforms also allow users to browse without logging in, while Discord requires you to have an account so people aged 12 and under cannot see the information you are linking. This is the primary reason we are not able to allow it”

This is completely false, as you can easily make an account on https://discordapp.com, click on ‘Open Discord in your Browser’, and close the dialogue that pops up asking you to add an email. Therefore you can easily view Discord channels without signing in. This defeats the purpose of Roblox’s primary reason.

I’ve been able to engage with my community using Discord more and better than twitter, facebook, etc.

I wouldnt doubt that staff members even use discord themselves and know how much of a benefit it could be on the roblox platform.

There is a difference between moderation and moderation that protects children. I’m not sure that I’d put faith in hundreds of groups of developers to properly protect children, even if many do.

The argument isn’t that Discord is as safe as Roblox is, or that it falls under Roblox’s definition of acceptable safety. The argument is that Discord, with its PM filtering options and large moderated servers, is far safer than Twitter, which is expressly allowed and even promoted by Roblox.

If Roblox displays a warning prompt when clicking off-site links, letting players know that the site they are going to isn’t affiliated in any way with Roblox and that they should check with their parents before going there, they shouldn’t be responsible for user safety assuming that the target site is generally safe like social media sites and Discord are.

There should be a whitelist of generally safe websites that are allowed to be posted and that display the warning before sending you to that site. Discord should be on that list.

Great post! I really hope this will change something

is far safer than Twitter , which is expressly allowed and even promoted by Roblox

We’ve had this debate before in another thread, so I won’t keep going on about it. Discord might be safer than Twitter, but Discord is a black box. People could spread links to Discord servers meant for account scamming, inappropriate imagery, and any range of vile communities. And Roblox staff could never take action for not being able to see what content lies behind the link.

I’m not sure that I agree that it’s up to Roblox to block Discord. I just disagree with the notion that Discord is by any means safe in general for children.

The point is that it isn’t Roblox’s responsibility to police what happens on other sites, and as long as they give fair warning before sending anyone off-site, and they are not sending them to an overall inappropriate site, they’re good. In fact, they can even hide links from <13 users and still give the warning to 13+ users for extra security.

I fully support @berezaa here. Here are my arguments.

“Linking of Discord servers and references to Discord on the Roblox website are not allowed. Since Discord’s Terms of Service only allows people aged 13 or older to use their platform and Roblox is a platform for all ages, we cannot risk unfairly exposing underage users to platforms such as Discord. In light of this, we will continue to ban the advertisement of discord servers, any references to Discord will not be permitted through our chat systems. We understand the argument can be made that YouTube, Twitter, and Twitch all have similar policies regarding users under 13, but these platforms also allow users to browse without logging in, while Discord requires you to have an account so people aged 12 and under cannot see the information you are linking. This is the primary reason we are not able to allow it.”

So Twitch is allowed even though you have to be 13 to watch things on there? It’s classed as using the Twitch Services…

“these platforms also allow users to browse without logging in”.
I think you’re wrong.

The Solution
Display a warning prompt for children and parents warning them that they are leaving Roblox and going to a site that is 13+ and unaffiliated with the company. Warn children to check with their parents before proceeding.
That’s covering Roblox as a company.

“any references to Discord will not be permitted through our chat systems.”

Simple solution, put Discord into hashtags for u13 and allow it for over 13 accounts.

FACEBOOK IS ALLOWED. FACEBOOK REQUIRES YOU TO BE 13+. GOOGLE+ REQUIRES YOU TO BE 13. TWITTER ALLOWS DMs AND EXPOSES USERS TO INAPPROPRIATE CONTENT WITHOUT SIGNING UP. YouTube also exposes Roblox users to bad language and offensive content via live chat on Roblox’s own live streams with hardly any moderation. Wake up Roblox.

these are taken from roblox’s own youtube channel which they link to from roblox, broadcasting to little kids… i’ve blurspoiled the worst ones.

Roblox cannot justify using Discord but they can pass on their YouTube moderation, exposing minors who haven’t even signed up to YouTube to this sort of content - Discord can be moderated , even automatically by bots, cannot see how Discord is not allowed when this sort of stuff is allowed and endorsed by Roblox. Change is needed.

This post was sponsored by free robux scambots, filling up roblox’s communication systems all day long. 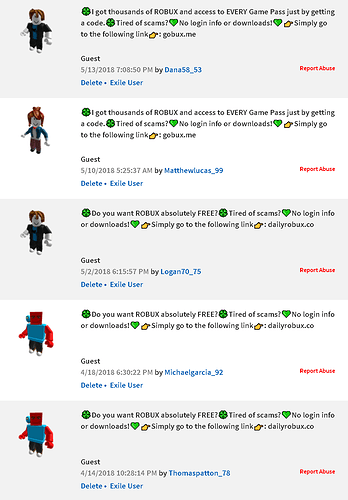 I love this post and all as it has an actual true purpose, but I feel like it’ll just be another one of those posts where a lot of community support is given, but any official word from Roblox themselves will be met with nothing but silence.

A lot of good feedback here. Keep it up and keep the thread on topic, this constructive feedback is useful.

Well, the staff are reading, although the outcome may not be known for some time.

I am proud of Lilly for her response, but her alone won’t do anything.

Also, surely there are plenty of other staff reading this, but they are purposely staying quiet for unknown reasons.

Not fully unknown, see this thread for more information https://devforum.roblox.com/t/staff-to-developer-communication/128003 but a response is a response at this point in time.

I agree I’ve tried getting members via discord servers with members already in it since roblox did the ban I can no longer stay in contact with my community!

Discord is an invaluable tool and 456 likes just goes to show that.