Love this module, but sometimes I face the problem of it waiting infinitely… Do you know what causes this?

Do you have a repro script for this? Otherwise, I’m unsure what the issue would be.

would return 0, because that’s actually a dictionary and not an array, since the first index is 2 and not 1.

Alright, so apparently Roblox deprecated elapsedTime, which this module uses.
What’s especially weird is the message it provides:

elapsedTime returns the elapsed time the Roblox instance has been running for whilst os.clock returns CPU time, which are two different components. I won’t be using os.clock in favor of elapsedTime for now, because even Roblox’s wait uses elapsedTime internally, as indicated by this script:

Obviously there is a margin of error, but the meaning behind what I mean is clear.

Another reason I won’t be switching to os.clock would be that running os.clock and elapsedTime in studio would return two completely different values:

I’m unsure why Roblox decided to deprecate elapsedTime, not even updating the API and stating it’s been deprecated, but I won’t be switching elapsedTime over to os.clock for now.

would return 0, because that’s actually a dictionary and not an array, since the first index is 2 and not 1.

Same person, same issue~
It still yields infinitely sometimes. Although the problem could be in my own code, I’m pretty confident it isn’t, as my problem was fixed once I used the normal wait instead of your custom one. Any ideas on what the problem could be?

[This has been addressed in the new update.]

I am pleased to announce that this module now uses binary heaps - probably the best solution when it comes to speed. A binary heap averages at a whopping O(1) insertion time and O(1) find-min time, but most notably it has an O(log n) delete-min time! This is a huge improvement from the previous version of the module. Thank you CntKillMe and Jiramide for helping me understand how to properly implement binary heaps

Hey all,
I’ve updated the thread with an explanation on why this module is actually important and good to use. I’ll copy what I appended onto the thread on this post:

Why should I use this, rather than default wait?

The main concern in a lot of Roblox games is that they use the wait function. Like, a lot. This is more bad than you may think. Firstly, this can clog up the task scheduler very easily, and deteriorate the state of your game very quickly. @maximum_adhd has demonstrated this issue, as seen here: 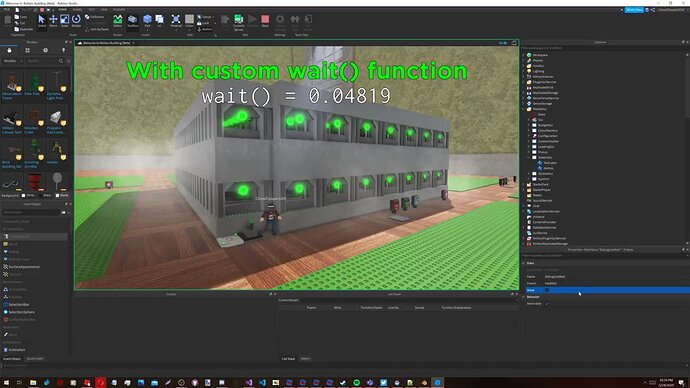 @
Another visual demonstration of why Roblox's stock wait() function is broken. Several models in Roblox's stamper sets rapidly poll the wait function, which grinds things to a halt while in large-scale use.

Yeah… Pretty bad.
So, how does this module address this? Simple! This module manages and sorts your yields to make sure there’s always only one wait running at once. This leads to making it practically impossible to clog up the task scheduler, saving your game from all the nasty issues.

TLDR This module makes sure your game will always have only one wait running at once, making your game not die from having a filled task scheduler.

This is an issue with having different hardware - I’m unsure regarding your computer specs, but my computer is pretty good and as such can compute more data efficiently, which leads to different results.

I have an i7-6700 processor and 8 GB ram. Is that not fast enough? I’m sure most Roblox players don’t even have high-end devices lol.

I’m unsure at this point. Using this code and putting it in a Script in ServerScriptService to benchmark provides me with the result of 0 failed on this custom wait, and 8302 failed on Roblox’s wait.
To benchmark, replace BenchmarkFunc = CustomWait with BenchmarkFunc = wait

requireing works fine for me, but you need to add a wait(3) before the benchmark - the game hasn’t fully loaded if you run the benchmark directly after the require, which I assume is the issue

Well, I am going to use this, I don’t knew about this issue, thanks for creating an alternative wait function for us!

Yeah, I’m getting inconsistent results but I guess everyone’s mileage may vary. Maybe my computer is too slow now

I left some commented out debugs - you can mess around with the source with them if you want to, for whatever reason.

I’m back! This time the problem is the Wait not waiting the proper time, usually waiting longer than usual. Although I’m not advanced enough to understand how this works, I think the problem is relating to coroutines? Putting the wait function in a coroutine seems to cause the whole inaccurate wait time.

Hey, could you make sure you are using the latest version and provide a script which replicates this issue?
I don’t seem to experience any such issues. How long does it yield for?