I’m using the .Touched event to stop an arrow as soon as it touches another part. This is the event:

It works perfectly on the server side as you can see here: 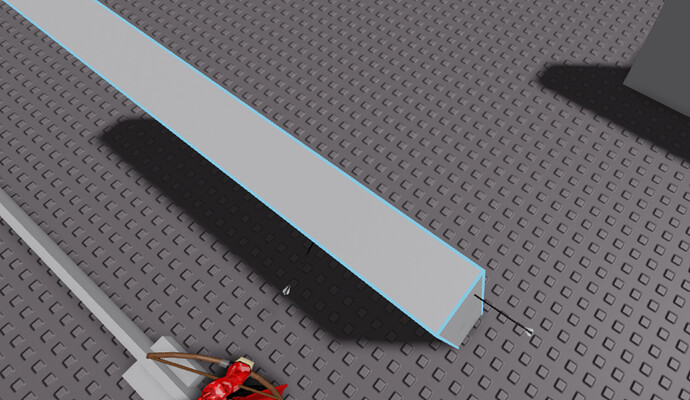 But on the client side the velocity and Anchored get changed before it’s touched the part, so it stops early:

Anyone think they know what’s causing this?

Edit: I’m noticing that the movement of the arrow is very laggy on the client side, but completely smooth on the server side

Seems to be an issue with the client being delayed, or something along those lines. A longer fix would be to retrieve the current CFrame of that arrow and fire it to the client to ensure that the position is replicated client-side; although that method isn’t very efficient, it’s the only solution I can offer so far.

It is most likely due to client latency. What have you set the network ownership to? For these types of things, I keep them on the server.

I’m not sure what you mean by network ownership.

I’ll leave the explaining to the API as it explains it quite well. Network ownership comes in handy for projectiles.

You could probably get the cframe/rotation and pass that to the client when it’s hit, and adjust the arrow that way.

bit, but it’s coming up with the error that it can’t be called on anchored parts, but this part isn’t anchored or welded to an anchored part

I don’t suggest using .Touched for this type of behavior. Take a look at the FastCast module.

The way you scripted is somewhat bad practice, you can improve this by instead of checking just your player, by checking if the part parent is a player.

Anyways back to the original problem, I HIGHLY suggest looking into raycasting for the arrow. Maybe take a look into this

How to make a raycasting gun Community Tutorials

Preface Alright so the developer hub and old wiki had this, although a few months ago it was removed from the former because it was just so terribly outdated it was a joke. So I thought I should revive that old tutorial. A lot has happened since that tutorial, like new raycasting api being added and filtering enabled being enforced and that tutorial was just never updated. So I am making this with that all in mind. Let’s begin! Alright so first you will want your weapon. I grabbed a Colt M…

I created my bow using raycasting, as it is more effective.

Here is an example from my bow, what I did was create a ray in front of the bow, which then if it found something it would stop the arrow.

I’d like to use velocity here though since the arrow starts to drop after travelling a certain distance, so it’s more realistic.

blue is the ray

So I should keep the arrow velocity changed but replace .touched with a raycast method? Would that stop this?

I removed the .touched part but The client is still very laggy compared to the server

Solved the problem by making the arrow move on all clients rather than the server. Wasn’t what I hoped to do but it works now.