How do you detect parts around another part with a certain radius?

I know that I can use .Magnitude, but, I think .Magnitude can only work by directly referencing parts. Another reason is that there are going to be so many parts and referencing each one is going to be such a pain. I cannot use partsinregion because the part is moving. Here’s a quick(yet awesome) illustration: 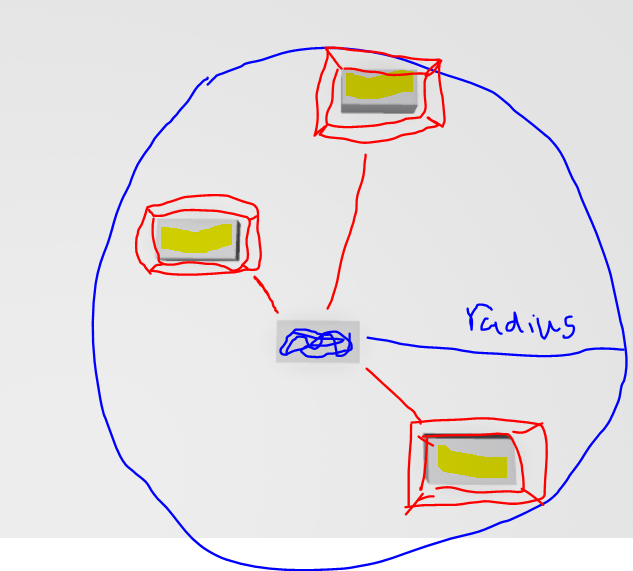 A potential solution after a small amount of digging is to:

I will continue looking for another solution if you do not like this method.

I would recommend using GetTouchingParts() and magnitude checking to detect those parts.

You can define the hitbox of the radius using a sphere or block, and run the GetTouchingParts() function to retrieve a table of all objects that are intersecting the hitbox.

If it is cancollide == false, then read this helpful article

Because hitboxes are naturally square, you can use .magnitude to compare the distance in relation to the origin/position of the hitbox.

Update: This module has served its purpose, but with the release of the new spatial query API this post is obsolete. It will be left untouched for learning purposes, but it’s strongly recommended to check out the built-in api solution instead. Recently I took another crack at an old module I wrote some time back. The goal of this module is to provide users with a way to create Rotatable Region 3’s which is useful for too many reasons to list. Even though this module (older versions) has been …

@overflowed @Hazania
how can I do it so, that, if I have multiple parts in a model, and I only want one of them to be detected, how would I do that?

I would suggest setting a PrimaryPart for each model, and ignore any other parts that are part of model (but not the PrimaryPart) using an if statement.

Edit: If that is not feasible due to the amount of models in your game, you could alternatively loop through all the parts found and ignore any extra parts that pertain to the same model a part was already found in.

what if I wanted to have all of them to be touched, but if they are in the same model, it only fires once?

@
You can use explosions with DestroyJointRadiusPercent of 0 as a sphere intersection test. simply connect to the .Hit event and set the correct radius

The cursed knowledge presents itself to you…

( Probably don’t use this lol, just funny that it happened to come up. )

When using GetTouchingParts(), you cannot ignore any of the parts that are touching it. What you can do is use if statements to ignore any parts that pertain to a model that was already found by another part.

This example would assume that all of your models do not go deeper than 1 child (if you have parts within parts within models, you will need to check for more than just one parent up to see if it is within a model, potentially by using the IsDescendentOf() method or the FindFirstAncestorWhichIsA() method.

Edit: The objectsFound table is going to be a list of your parts found, no more than one part per model. Your blue part will be one of these, you probably want to add an if statement to ignore that part as well.

Is there any way to make it more efficient/ less resource intensive?

It is probably most efficient to just use all the parts found rather than eliminate repeating model’s parts considering this is going to be checked very frequently as the “blue part” moves.

Why is it important for you to only get one part per model, if you don’t mind me asking? This may help with me determining the best solution for this problem.

Suuuper sorry for the late reply. Here is the function that I use to check collisions:

Similarly to @Hazania’s reply, I use sanity checking to filter out parts. If you only want to detect a single part within a model, you can set its name to a specific name that makes it easily distinguishable in a script

Bless you for using ipairs. I don’t think it should really be about potential nils but rather what you’re iterating over and understanding the difference between ipairs/pairs. ipairs should be used for arrays.

ipairs is designed to iterate over arrays, where the keys are numeric and incremental from 1 to the length of the table. Therefore, your iterations are occurring where your keys are known at [i+1]. It is also, compared to the old VM, significantly faster. A benchmark reading at RDC showed around 6.49 speedup.

pairs should be used in cases where you’re working with dictionaries, or otherwise where your keys are not known from the beginning and can be arbitrary. pairs calls next and gets the next element based on the last key.

Another thing: ipairs will iterate your elements in order. Order is not guaranteed nor known when it comes to pairs-based iteration. Even if you have numeric keys and you use pairs, it will not default to incremental iteration. There may be some cases where order is important!

I actually forgot all about ipairs! Thank you for all of that info, I was pleasantly surprised.

Ok, how do I add a touch interest? I cannot find it. Sorry, this just occurred because I forgot that I needed to set the can collide to false.

Touch Interests are created automatically by connecting a BasePart to a Touched or Touch Ended event. 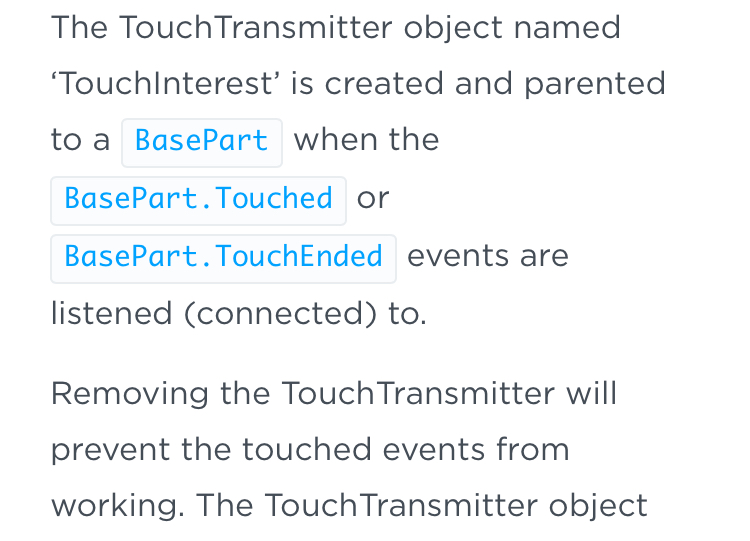 But how would I implement that as GetTouchingParts() ?

It’s kind of a strange situation where you don’t need to connect a .Touched event, but you will have to anyways to create a Touch Interest.

Sadly, I don’t think there is another way to get one.

I would just create a .Touched event connected to the invisible part you made and let it be; it’s a waste, but it’s not going to be hampering performance.

If I don’t have .Touched it still detects what is touching it, but says that it is nil