I'm having some trouble with variables using the plugin [EventBlocks]

So, I am making a simple tycoon game so I can understand how eventblocks works
And I have gotten pretty far.
I’m just having trouble getting all the server scripts to read a local variable…

I’m trying to make it, so everyone has their own money. when I do it on the server side both players have the same money but, if I do it with local It stays to that player.
I just don’t know how to tell all the other scripts how much money I have. 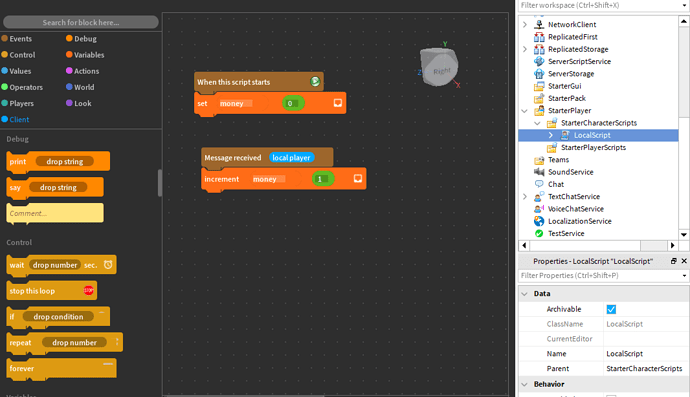 That is the local script 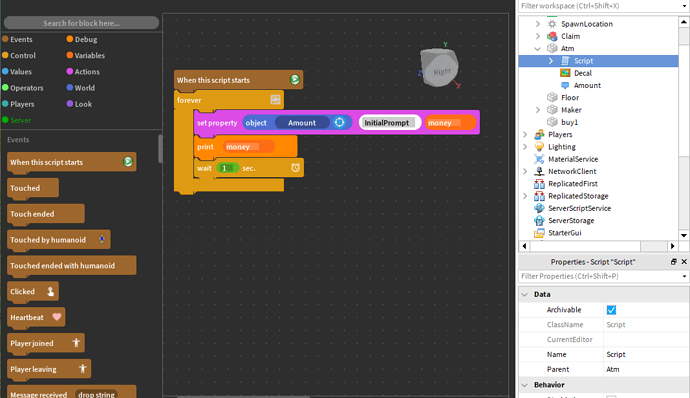 And that’s the server script.
I know that it’s not going to work how it is.
You also can’t put local scripts in anything other than the characterscripts.

I never even knew there was a scratch-port on Roblox.

Me neither my mind is exploding, Someone already made block coding for roblox? wth

I thought the same thing. Not that I really care as I hate block coding since it is way more boring to me

You also can’t put local scripts in anything other than the characterscripts.

Yes you can, read the local script description, it tells you where you can place it

I did… It says you can only place it in startercharacterscripts.
Did it say something else for you?

Maybe if you ask the creator?

There’s only one type of local script. As the descriptions of them says in Roblox, they can be placed in 6 places:

I’ve limited it only for one place so it is easier to remember.

I’m surprised someone made a topic about my plugin