Is there way to rotate model with parts?

Hello!
I’m currently wondering how to make rotate parts in model like this

I tried used :SetPrimaryPartCFrame() but that did now work well
Thanks for any help!

Having all the parts modeled together is a nice workaround. Just include a part that’s exactly in the middle which will be the primary part, and hopefully you guessed it, you’ll be model:SetPrimaryPartCFrame()ing it with a rotation CFrame each time.

We create a new part parented to workspace (Instance.new("Part", workspace)) and directly position it to the middle, which is (workspace.A.Position:Lerp(workspace.B.Position, 0.5)). Lerping can be thought of as the percentage of how far we want to go from A to B, we want to go half way (0.5) from A to B, and it’s quite clear that’s the middle of them. Feel free to ask if you didn’t understand. 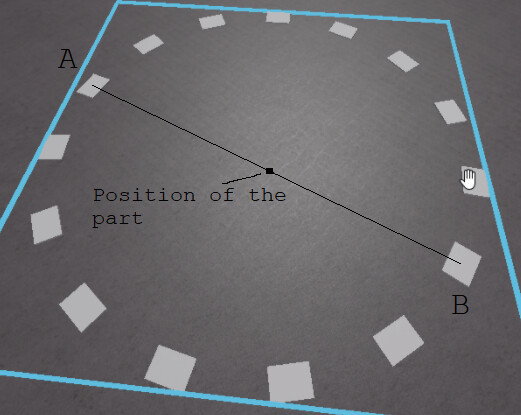 After that you may want to do some stuff to the created part, set it as a primary part first, anchor it, uncancollide it, make it transparent ect. (Of course don’t change the position)

This is just for demonstration! You’re not gonna want to use a while loop with a wait() in your final product.

Each time, we set the primary part cframe to the previous cframe, rotated by (which is multiplying by a CFrame.Angles) 0.1 degrees along the X axis (if it doesn’t work rotate the Z axis instead, I’m a dummy!)

A much nicer solution, that doesn’t use a model, will just be simple trigonometry, converting polar coordinates to cartesian ones, but explaining this is hmm, yeah. If you’re interested, I’m happy to explain.
Have all the parts under a certain folder, or just have references to them in a table.

The best way to do is use Colbert2677’s method of tweening models. Put an invisible part in the middle of your circle(model), that part will be the pivot(must be anchored!)
now add a weld constraint to each of the circle parts except the pivot and weld to the pivot. btw your parts that are welded to the pivot should be unanchored so when the pivot rotates, the parts will also follow along because its welded
now use Tween service to rotate the pivot