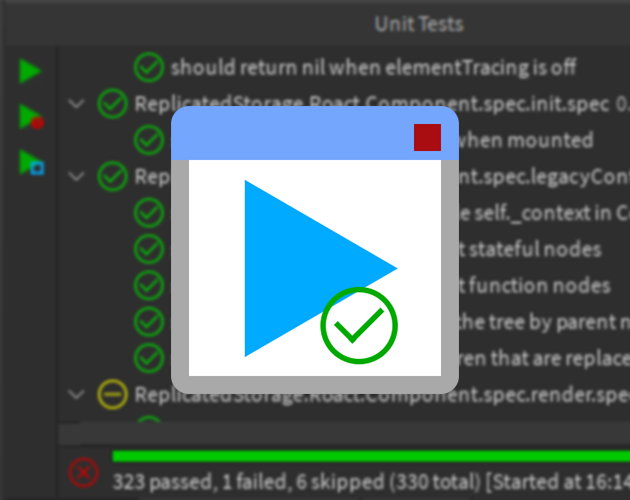 System for quickly and repeatably running tests in Roblox Studio. 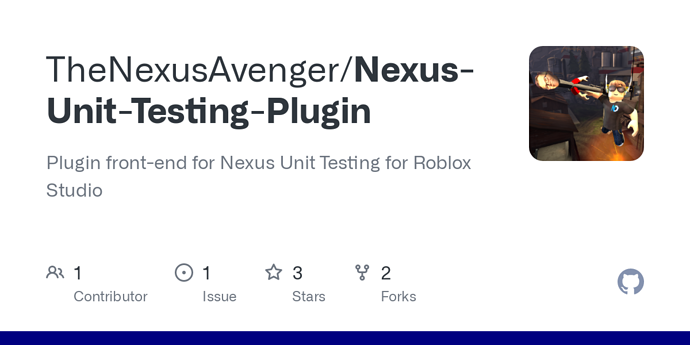 Why Unit Test
Most developers on the Roblox platform use manual testing for developing systems. While this works for most games, manual testing is a long and fault-prone activity that still leads to major bugs reaching players. Unit testing provides a fast and consistent way to test the logic of games, plugins, and subsystems for cases that could come up in production, both as common cases and edge cases.

How to Write Unit Tests
Writing unit tests for Nexus Unit Testing and TestEZ is described in the docs for both projects:

For the broader topic of “how to write unit tests”, this thread does not cover practices for creating unit tests. At a super high level, you should focus on:

Major Features of the Plugin

You are free to start using it and maybe decide to donate back if it proves to be a major aid in developing games. I have been using it for years and it has helped enable tens of thousands of dollars in revenue with relatively small-scale games.

Plugin Limitations
The current design does have some limitations that should be known going in. For bugs, see the README in the GitHub repository.

61 Likes
Is it(), expect(), and describe() functions real functions? And if they are how and when do I use them?
Benchmarker Plugin - Compare function speeds with graphs, percentiles, and more!
Unit Testing Workflows are Impossible
xSoulStealerx (xSoulStealerx) March 23, 2020, 12:23pm #3

This looks great, purchased instantly! I will definitely be using this for my project. Great plugin with amazing documentation.

1 month has passed since the release and no significant changes have been made, so the plugin is now free. I did have a few people say that running all tests with a large game takes too much time since it creates a list frame for each test, but it will be months before I address that.

I think the plugin is broken? I keep getting these errors (like 5000 of them actually) and it causes Studio to freeze up for a good while. I’m not even sure where it’s getting IsNotOccluded because it doesn’t appear anywhere in any script.

The plugin itself is still functional. This popped up a few weeks ago and is due to a design flaw in the plugin framework. I currently am allocating my time to other projects so I can’t deliver a fix soon.

2 years after release, I have finally released a new version of the Nexus Unit Testing plugin that fixes the major performance issues and more!

Unlike the previous versions of the plugin, the version on Roblox has not been updated yet. The latest version can be obtained from itch.io instead, which you can directly support. Proper support for TestEZ is something I want in the plugin so the output is easier to follow, but I can’t justify the effort. If you have been using this plugin for your games and you feel it has helped enable a significant amount of revenue or reduction in costs to testing or reactive support to issues, consider donating back.

If you do get the plugin from the toolbox, you will be stuck on V.1.1.3 of the plugin with a new banner about the version being deprecated. If it breaks, that version will not be fixed.

This means if you had ModuleScripts without .spec or .nexusspec in the name and relied on require("NexusUnitTesting"), they will no longer be detected. At scale, this makes detecting tests significantly faster.

Due to how Lua handles function global environments, if a function was defined outside of a test, it would output to the parent test instead of the test it was called. This has been addressed, but only for Nexus Unit Testing since TestEZ still doesn’t support nested tests properly.

For the following example:

While V.1.2.0 and newer will show the following:

Due to a limitation in the previous plugin framework, if you were to rerun tests with tests selected, they would not remain selected. The limitation was addressed and this is fixed. Rerunning tests also show a lot faster now.

If you have no tests found when attempting to run, the plugin will now provide a bit of helper text.

Could I just double-check, for tables :AssertEquals() checks equality of tables (by comparing recursively checking equality of elements), whereas :AssertSame() checks if tables are the same object in memory?