A guide to Roblox's Defaults

The Problem With Defaults

Well in this tutorial I wanted just to go on a simple rundown on the defaults of Roblox. What I really wanted to do is to show how forking works, including custom controller, chat, and GUI. In other words, I want to give you an understanding on what you can change to your game to give it that extra spice.

*Note: This is my first tutorial. Please mention any mistakes I make or reply with how I can improve thanks.

So, when you load a new experience and play test for the very first time without changing anything, you are greeted with your character.

The players avatar is how the player connects to the game and vice versa. Most games don’t usually change the character much due to the fact that it is much easier to leave the player to use their own character.

For most games this is completely fine. For example, vibe games, dancing games, obbies and generally any game where the player is an individual. However for other games I think it is always a bad idea to leave the character on default. There are several reasons as to why you should change the character:

Some games interestingly use the head, face and hats that the player is using and combine it with a uniform that all players use which is a good idea too.

Another good idea is to show the character to the user and allow customization before you spawn in as being put in a world with a random character can be a little disorientating imo for new players.

I can’t say this for all games but sometimes I feel that having a “standardized” character gives the game more feel.

If you want to see some games that have custom characters here are 3 examples that do this pretty well:

So, how do you change the default character?

How to customize the character

There are several ways you can customize the character of your game.

In this Instance I will use a simple Dummy and add some hair an clothes. 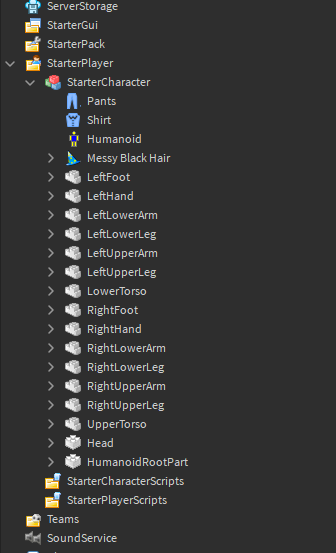 Refer to StarterPlayer for more info on what you can do.

Note: This change is for all Players that join the game. This method does not allow you to change the characters animations.

HumanoidDescription is a “fast” and easy way of loading Characters according to their team. You can put animations, clothes, accesories and more. Usually, this is the way to go if you want custom characters in your game. 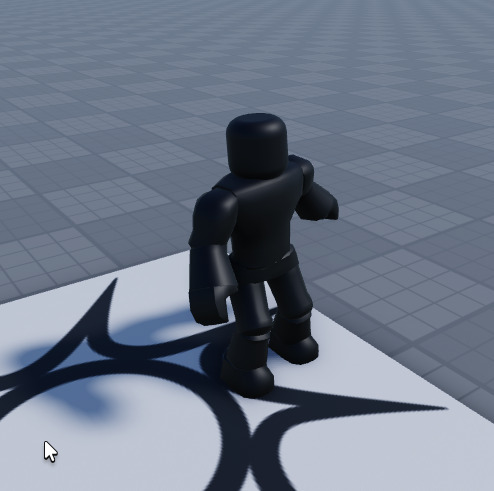 This method is probably the most “non-default”. Not only does it allow for more “custom” characters but it also enables you to have more control over different types of characters in game.

For example, one player could have a character with 4 legs like a cat and another could be a flying creature like a bird. Then you have a fun game Cat-Catch-Chicken, lol.

Add the character to ServerStorage

Change the players Character to the new Character

One thing you can also do which is very simple to script is to have scripts insert clothing or accessories into the Character to change it that way. That is much more simpler task than creating a HumanoidDescription and setting all the values.

There are a couple of things to also consider when creating a custom character.

Humanoids is one default I wish to get rid of completely

Yes, you heard that right. Humanoids have simply too much functionallity in some cases. They can swim, climb, sit, drive vehicles, can load accesories
So, let’s go a little deeper shall we?

Roblox provides a bunch of these default scripts. Most developers often forget that these exist or know that they do exist but not know how to use them.

Let’s look at some of them.

In the StarterPlayer there are 5 default scripts 3 in StarterCharacterScript and 2 in StarterPlayerScripts
What is wrong with these scripts? Well take a look.

Let’s have a go at what is known as forking

You should end up with your character and a couple of scripts. Take a look inside the scripts

Note: These are the scripts you want to look out for. Blue are the scripts, Red are places you can look into if you want some extra customization for the character for example sounds and body scale. 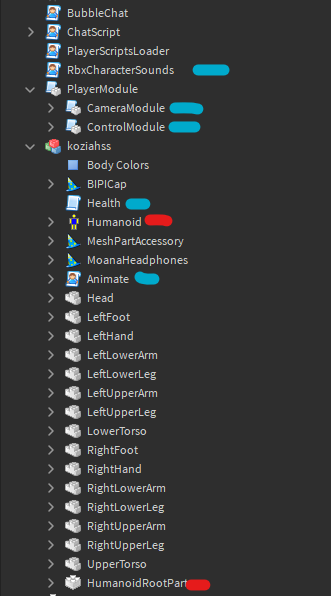 Now, for some games that use normal R6 or R15 or any default characters these scripts are fine. In fact they are quite useful as Roblox provides them with a few decent methods including:

However, if you are like me and you don’t like doing things the easy way. Or you are making a game for example a “roll a magic ball” with an view or a building game with orthogonal view, these scripts are a nightmare.

Now Roblox primarily is a 3d game. However, not all 3d games has the player control an avatar. Sometimes you want to start from scratch with a clean slate.

Now what you will want to do now is to make 5 scripts. Simply copy the script names and types and put them into the starter player. Then playtest 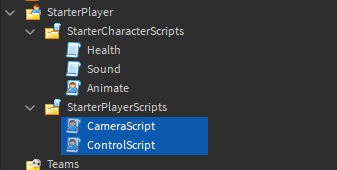 Of course you don’t have to add anything to these scripts is you want to. You could have them completely blank. (or you could create your own custom character controller and/or game mechanics)

There is one downside to all of this is that it will increase your development time. Developing systems like these takes time. However, I believe that the systems that are in place already are quite limiting for some developers. Is usually see the same types of 3d games like obby, tycoon, simulator. No there is nothing wrong with these games however they are all incredibly similar to each other, the camera, the character controller etc.

To sum this up basically I believe that if you use non default scripts, your game will be unique. I can’t wait to see what people do.

There are a couple more things that you might want to look into when creating your custom character/player too.

Thats it for now. I am planning to add a chat section and what you are allowed to customize. If you have any ideas or improvements you would like for me to add please let me know. Thanks.

11 Likes
How to make a Single Block Mesh Character