A Short Checklist To Think About When Creating a Game

1. Planning
When creating a game, planning is key. There are various ways of doing this but what I find is best is to write down a core loop. The Core Loop of your game is the main things your player will be doing in a game. Here’s an example; 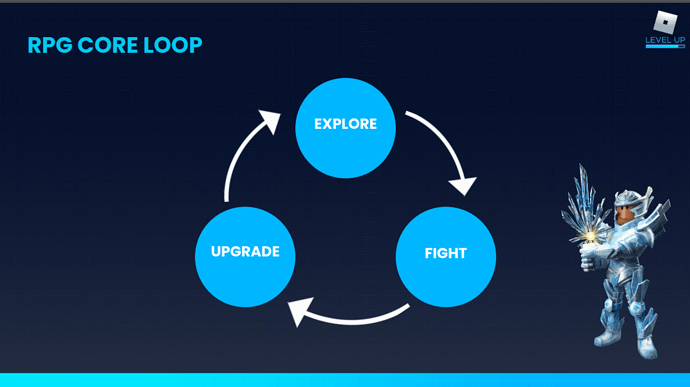 Capture1189×667 420 KB
This photo is from the Level up event thing. But as you can see, these are the extremely simplified version of what a RPG game would entail. So you would wright down your core loop on something like a whiteboard then build your game off that concept.

2. Good adverts
This entails spending the right amount to get enough attention for your game, an add that catches the attention of a user. This would mean making the ad look new and different than the rest. In my opinion, players aren’t looking for the same old games, so an ad that looks and sounds different than all the rest (while not looking like it was made by a 3 year old) can really help out a lot.

3. Good Presentation
Once a user clicks on your game/ad you’ll want to capture their attention right away. You want them to want to click the play button, not think it’s a lame game and immediately click off. So an enticing description with thumbnails that make the game look fun to play can really make the player want to click the play button instead of clicking away. For sponsors a good game picture will really help draw people in. This also applies for your games name. Something like “Super Mario Ultra Fun Obby” doesn’t in the slightest make your game sound interesting. Take Minecraft, their name is simple but lays out the two main concepts of the game, mining and crafting. They didn’t name it “Block Sandbox” or anything generic like that. Instead they combined two different words into one name.

4. Tell The Truth
Once a user clicks on your game, they then become a player. You don’t want to deceive your audience with thumbnails/descriptions that make the people think that their going into something completely different then the game they clicked on. This will only lead to dislikes and less people playing the game. The worse the Like/Dislike ratio the less people you’ll have clicking on your game no matter how enticing your games thumbnails, descriptions, or your games name. If you have a bad like/dislike ratio, then users wont want to play the game.

5. Fun Gameplay
Once a player has loaded into your game, you’ll want to have some good gameplay right off the bat. Usually, if you don’t have good gameplay, the players won’t play for more then around 3 minutes. So you want the first three minutes to be very fun and engaging. Another thing you don’t want when releasing a game is bugs. You need to play test your games and even get multiple people on at a time grinding the game to test everything. The more bugs are in a game the less fun of a time a player is going to have in that game. Now, you should always have a tutorial. This is important because if your game doesn’t have a tutorial to show the players how the systems in your game work then you’ll end up losing players because they don’t know what to do.

6. Single Player Friendly
This is extremely important for games that aren’t going to be popular as soon as you launch or don’t get enough players at a time because if you have a game like lets say a fps game, when there’s no one online, how is that player going to have fun? Adding in something like a single player mode would make that lonely player still able to play the game and have a fun time.

7. Returnability
You want your game to make people want to come back. Adding in something like daily loot drops or exclusive items or skins for people who played the game a certain amount of days, or weeks, in a row. The more players are coming back to your game the more visits you’ll have and the more online players you’ll have. With bigger games, you’ll have to update constantly always bringing new things to the game or else you’ll see a major drop in your DAU every week you don’t update.

8. Remember Your Audience
When developing a game you need to keep in mind what age group your game is for. So like for a younger audience you should probably go for a low to mid poly build style with lighter UIs and more cartoony animations. Also remember when creating a game that the UI will set the mood for your game. Brighter UIs bring on more happy and playful moods while darker UIs bring on more serious moods.

So that’s going to be it for my little resource to help yall out! If you think something is incorrect or you have something else that I missed please tell me and I’ll try improving my resource! Thank you for reading!

i’m gonna go ahead and say

When developing a game you need to keep in mind what age group your game is for. So like for a younger audience you should probably go for a low to mid poly build style with lighter UIs and more cartoony animations. Also remember when creating a game that the UI will set the mood for your game. Brighter UIs bring on more happy and playful moods while darker UIs bring on more serious moods.

Apparently ALL ages can play your game.