Allow us to make our posts wiki

For people who dont know, wiki posts are posts that can be edited by anybody.

I can see us benefiting from this in #resources in specific, as tutorials can become out of date.

Feels like this would complicate moderation? Not to mention encourage a lot of vandalism.

Anybody could see edits, and on my site, when a user tries and edits it with a watched word or something Akismet/Google Perspective deems should be reviewed then it holds that user accountable, not the op or the previous editor . 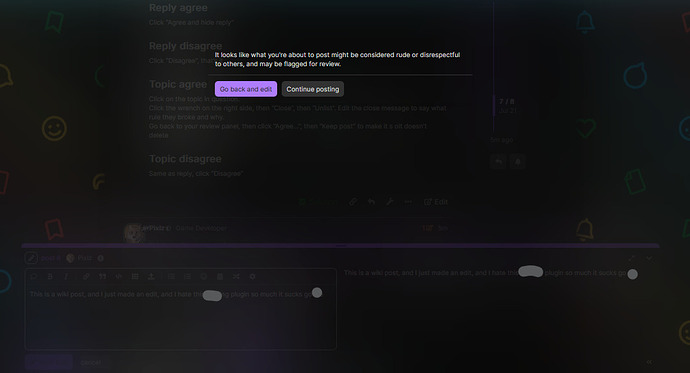 I disagree. It would make Moderation extremely complicated and difficult. Especially with trolls and spammers.

In other words, I see this could do more harm than good.

Not sure what tools discourse has behind the scenes to help with moderation of wiki posts. Seems like it could be used as a cheap tool to defame OP by trolls regardless. Moderators might see the full picture, normal users might not (easily). Hard to say if it would be scalable in our community.

It took me a few tries to get this right, but here it is.


As you can see, as soon as I edited it with spam, the filter instantly picked it up and flagged it for further review, which should eliminate that fear. I’m not sure why it displayed as being under @Filter_Test as it normally displays as whoever wrote that. I’m not sure how the general moderation would work, but they can probably figure it out. I have been told to stop focusing on solutions so I will
3 Likes
LifeDigger (SummerLife) July 22, 2022, 12:05am #7

I could see this getting abused to be quite honest.

Maybe if there a was a rank that you could earn (not easily) to gain such ability, then this might not be a bad idea to try out.

By default, Regulars can make posts wiki, and members can edit the posts, but Roblox doesn’t have new member or basic members.

I think there should be one rank above Regular that lets you edit some posts, or at least ability suggest changes to the creator of the post. But based on the maturity of DevForum, I would prefer “suggesting” over “editing”.

The only other rank above regular is leader, but leaders can unlist posts, lock them, pin, and their flags are more powerful, that was around when the sage program was a thing (cc PeZsmistics’ topic when they were a sage This is a Topic), and I dont think Roblox is bringing back the sage/editor programs any time soon

I am talking about a custom rank, something like:

There is few implementations that I can think of.

Ability to edit posts. It would be great but as @PeZsmistic mentioned it will most likely bring vandalism, especially considering the situation with #development-discussion.

Original creator of a post will be able to view suggested changes and have the ability to merge them.

Original creator will be able to see suggested changes and have the ability to merge them, while additionally rank-3 (like Sage) users will have ability to suggest changes and vote for the change that they want the most to be merged and if there is enough of traffic and good rating, the change will be automatically merged and moderators will be notified.

And also bit off-topic, the ranks could be renamed to something like this:

As much as I would love to agree, I have to respectfully disagree with your idea to make your posts wiki

I can sort of see where you are coming from with this, but this feature would be catastropic. Imagine Reddit or Twitter where you could edit anyone’s post, for example.

Even if this were to somehow be implemented without issue (again, not gonna happen) moderation would take a huge hit, and if there weren’t an edit history by who edited the post, the user who made the original post would get banned or even terminated for something that would be out of their control. Not to mention I don’t see the point of this feature ever being added.

A better alternative would be just replying with new info.

There are some old posts in #resources:community-tutorials which have inactive OPs and outdated info too

Last time I checked you can reply to those too.

which have inactive OPs

Inactive OPs don’t stop you from replying. Just because someone doesn’t add what you said to the post doesn’t make it irrelevant.

I really don’t see the point of this, because as others have pointed out, it will complicate moderation and I just don’t see a point for it anyways.

I think this could work for giving this to Regulars (but only allowing Regulars to edit wiki posts), but I don’t see any point of this expanding to any other trust levels.

I think that your middle point idea could be used along with an edit queue system that would apply to anyone who has lower ranks. This is how StackOverflow does it as far as I know.