So whenever I ask for help in Art Design, 80% of the posts there are full of feedback posts…

Asking for feedback is helpful and all but it’s just flooding out all the posters who need actual help with their art projects.

It’s a bit annoying seeing people who need help get ignored because of the amount of these posts and it’s sorta affecting the way the topic works completely.

After looking at the rules for this catagory, i saw this. 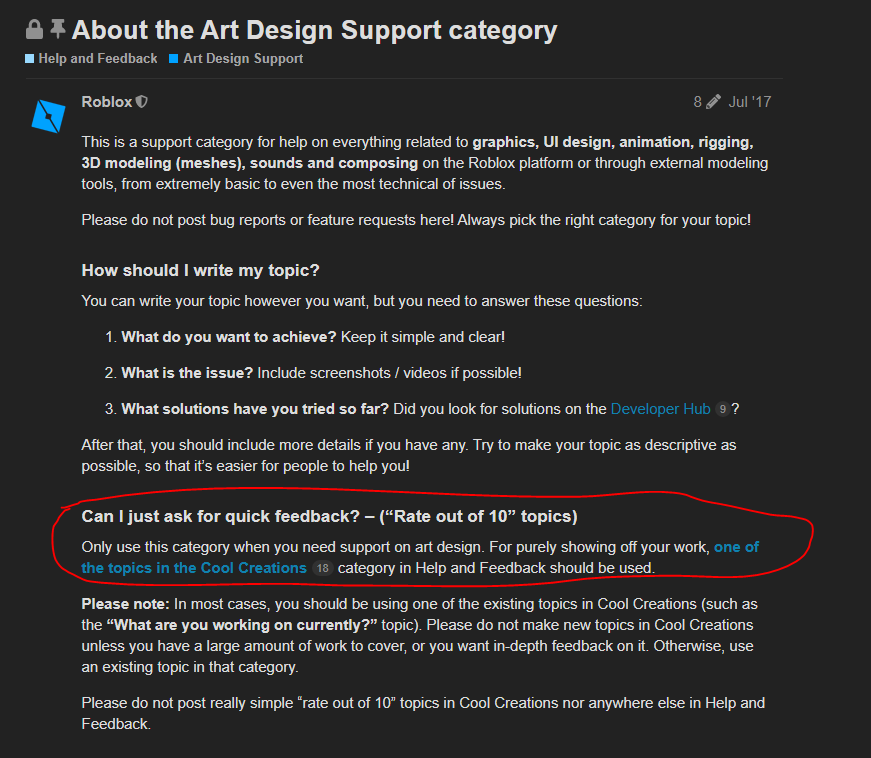 And yet Art Design as a whole still looks like this: 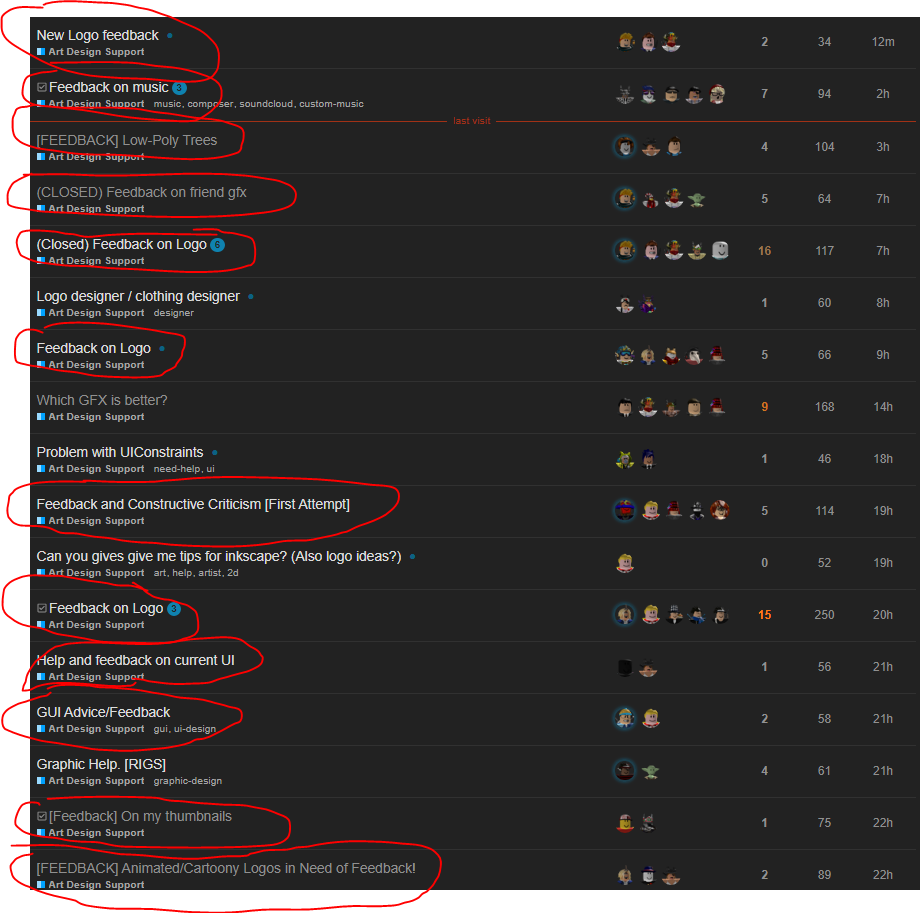 I’m aware that the other categories have feedback posts as well, but it’s much less. 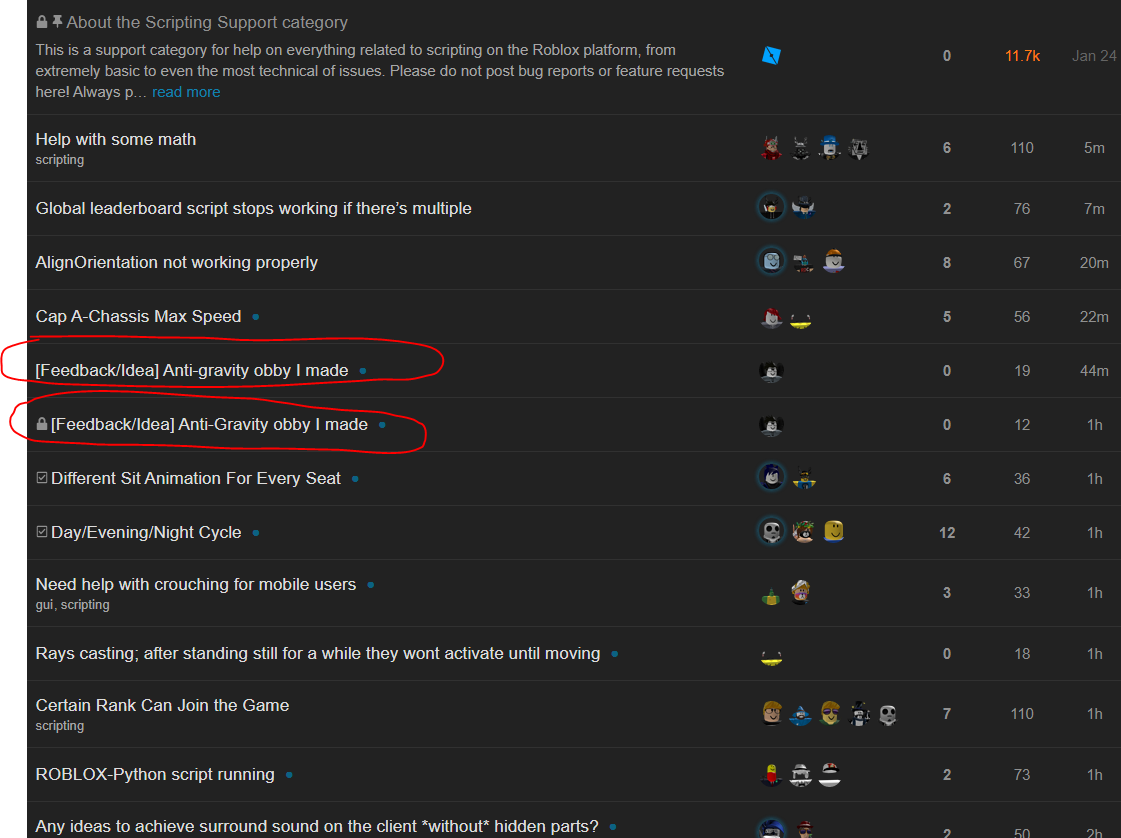 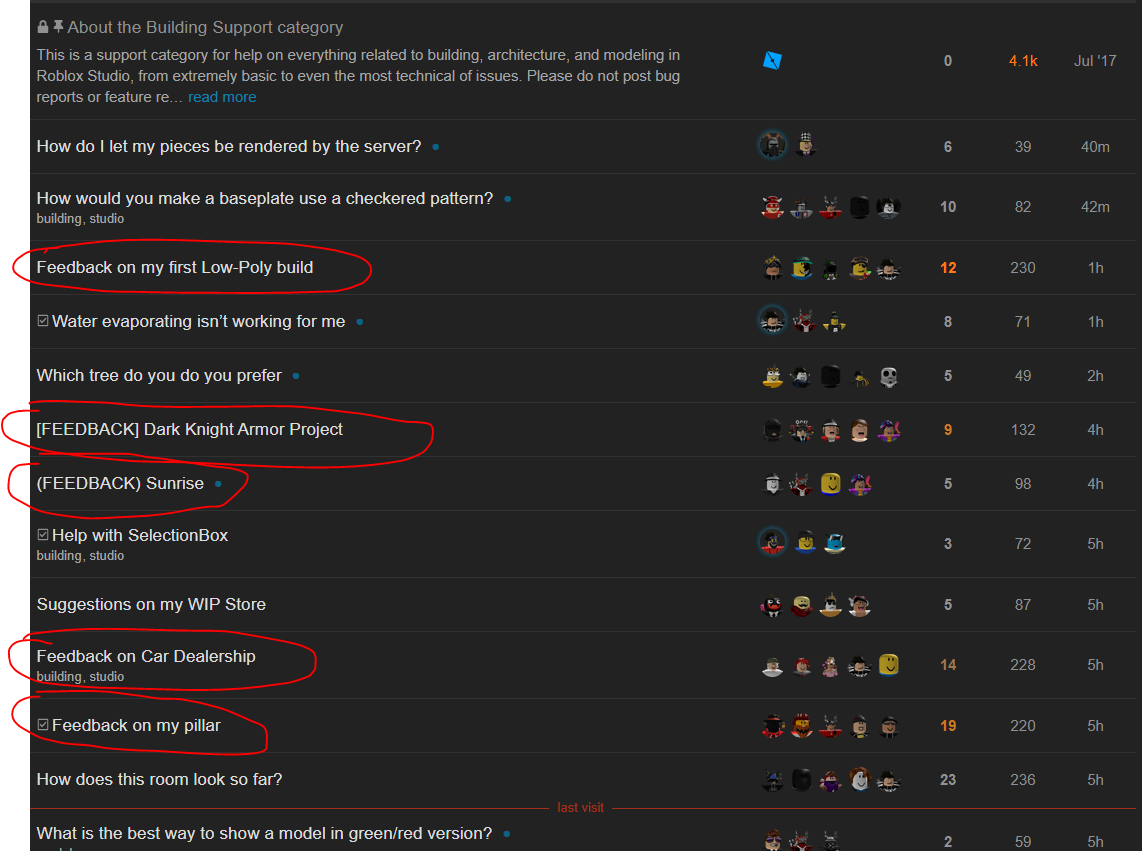 I messaged a Sage about this weeks ago and he said that the rule i show above is still part of the Forum Guidelines and not outdated.

I don’t like the fact that every player suffers from this.

It should be an issue that has more attention from everyone, plus i still don’t understand why people just don’t put their creations in “Cool Creations” if they want feedback.

Nobody should be punished over this, but some more clarity is needed so everyone knows what should be posted there and what shouldnt be.

What do you mean?

Asking for feedback is helpful and all but it’s just flooding out all the posters who need actual help with their art projects.

What? They’re asking for feedback, literally the purpose of the catagory. That’s only saying asking for x/10 isn’t allowed

Feedback is helpful but there’s already a category for feedback…and Art Design is for people who have trouble with their ongoing projects.

The category itself is called “Help and Feedback”

Is there really a point you are trying to make? Maybe from your perspective, it seems like a flooding issue. But from the perspective I might use, it looks like the main use of the topic is for feedback; help is usually easy to find for art-related issues. Most people here use blender for 3D modelling, GUIs are well-documented and overall there are really great sources for most art topics I can think of. Obviously there are cases where we need help, but I just can’t see why the “help” portion should be in a balancing position, just because the name of the category includes “Help”. If people want feedback, great!

And using scripting support is a sneaky way to support your argument - it’s mainly filled with bug issues and problems with scripts not working. The internet doesn’t have an answer for all those things, and even then there are a lot of repeated issues that have warnings by Post Approval and Sages to search the forum before asking for help. In that way it’s not really fair to measure the ratios of help:feedback between the categories and deciding they should be equal.

Then why do none of the post get flagged? Because it’s fine there.

Is there really a point you are trying to make?

One point is to show that some developers who need assistance with their art projects get their posts flooded out sometimes because of other ones that are against the Forum Guidelines.

The other point is that people should know that a category for feedback exists, someday they’ll most likely start moderating Art Design more based on the rule i pointed out.

thing21848×379 20 KB
I really don’t want massive amounts of people to be punished for a rule they don’t fully know about.

If the rule was never made or was just simply updated, i’d understand the feedback post situation and this post wouldn’t exist.

It’s an example and is not sneaky in any way…Just look at every other support category and you’ll see that there’s not as many feedback posts.

I’m simply asking for everyone to have more clarity on what and what isn’t allowed to be posted and yet you’re wording over half of your argument around like i’m someone who’s against feedback.

Feedback is important is for a developer to move forward so i’m not against anything like that.

If the rule gets updated to allow more feedback posts, that’s alright.

I’m only talking about this because they’re technically all rule-breaking posts, i can’t support them taking up so much space in Art Design if even the DevForum has rules against them.

Then why do none of the post get flagged? Because it’s fine there.

I think some do get flagged and made private, but new posts are constantly being made.

think some do get flagged and made private, but new posts are constantly being made.

You think, I know. I’ve seen so many art feedback posts , even some from a long time ago, they’re still up. There’s a difference between thinking and knowing. Also your just taking the catagory rules the wrong way. It literally says asking for x/10 isn’t allowed, not feedback in general.

A community sage told me that it wasn’t allowed though…and that they’ll start moderating the category more sometime in the future.

You can message the Community Sage group yourself and ask if it’s allowed or not if you want.

( I was actually about to make a feedback post myself but decided to message the group first to see if it was allowed or not. )

You’re missing the point though - many people require feedback in art design than in other categories. You’re using the other categories to support your case but really if your point is that all feedback should go into Cool Creations, then all categories are categorically containing invalid posts.

Feedback is important is for a developer to move forward so i’m not against anything like that.

If the rule gets updated to allow more feedback posts, that’s alright.

I’m only talking about this because they’re technically all rule-breaking posts, i can’t support them taking up so much space

I agree, except after this you only reference Art Design, and so does your title - you are sending the wrong message if you are truly caring about people being moderated for asking to get feedback on something they made.

The reason why I actually support feedback, even though technically yes it is on the line of being against the rules, is because of how Cool Creations is set up. The category requires that new posts be made by Regulars, so Members have to go through Post Approval (which takes time). It’s a latency issue, and on top of that, the category’s information post discourages creation of new topics. So the only way to get feedback quickly is through replying to one of the larger threads.

Once you’re in one of those threads, maybe one or two people will take notice. You don’t receive the same exposure on those larger threads, simply because usually Cool Creations is for showcase, and in general the larger threads are less likely to have each reply read. A new topic in Art and Design is much more likely to garner attention and shows up with its desired title on the forum homepage. This is an inadequacy of the forum, so it makes sense that these “rules” are being broken in order to have better and overall more reliable feedback.

Well, the point of the thread i made is to bring attention to the rule and possibly get it changed so nobody gets punished for requesting feedback.

Or just convince a sage to make an announcement warning people that it’s against the rules.

Or maybe just rename Cool Creations into Art Feedback, which is probably an important change.

Art Design is mainly brought up because more people make posts there since they want everyone to see the artwork they made, the other categories don’t have much posts like that.

There should be a better way to make Feedback Posts without risking any moderation at all, hopefully someone important sees this thread and realizes that.

A common mistake is that people cannot differentiate the use between #help-and-feedback:cool-creations and the other help categories. It is preferred that those feedback posts should be in the cool creations category, not anywhere else.

The true difference between them is that cool creations is for creations without any need of help or direct questioning about any technical issues, which otherwise are the other help categories.

I don’t think it matters. Users looking for feedback on their design shouldn’t require post approval. With this reasoning we should just make the entire help and feedback category require post approval. For people looking for feedback on their code, and their builds. If anything that would be more counterproductive and discouraging. After all the super-category is called Help and Feedback. And the sub-category is Art Design Support. You are looking for support/assistance with your art.