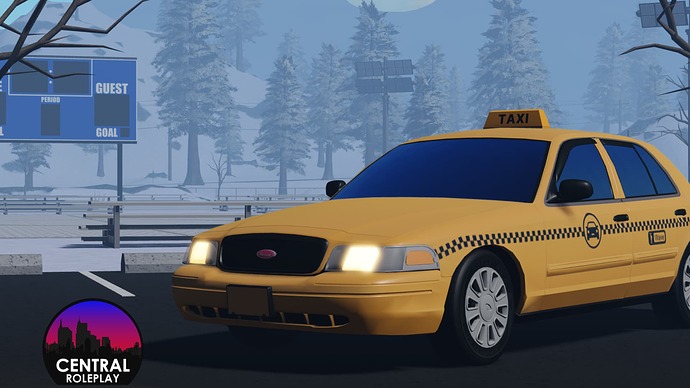 Hello everyone, we are back again after several months with a fresh update. Now introducing a new winter themed map with snow everywhere! After a long wait of around 8 months, we have finally brought an update to you that introduces a selection of new features, including 2 new jobs and 2 new vehicles to the civilian team. As always, Maple County is still temperamental and does tend to break from time to time. We work hard on fighting the bugs so you have the most enjoyable experience, but we can’t catch them all!

Before we go through all of our latest features, we would like to thank you for all of your continuous support in this project. This project would not have been possible without our amazing developers and of course you guys to show appreciation for our hard work. Without further ado, let’s get on with this month’s patch notes.

We have released two brand new jobs, one being the Maple County Taxi Services. This team comes with 4 existing vehicles within our game and one brand new vehicle. This team also comes equipped with a highly advanced taxi system where you pick up and drop off AIs at their randomly generated destination. The system also comes with an NPC rating system where players are given a rating based on how well they drive within Maple County. This also affects how much experience and how much money you are given per ride you complete. Keep in mind that just like real life, players will get paid based on how far the NPC chooses to be driven to, so the longer distances, the more money you receive.

The Taxi team features with the following vehicles.

For those that have been sticking with us from the beginning, you should know that all vehicles and tools all require ranks to ensure that there is a form of progressing within the game. All teams such as the police department and sheriff department as well as all of the civilian jobs have ranks which show your seniority playing on that team. The ranks and requirements for this new team is as follows.

We have implemented a highly advanced AI call system. Upon joining the Taxi team, you will be able to use a new application on the phone named "Taxi Co". This app will display all of the AI pick up jobs that players will be able to accept. Upon opening the app, you will see something a little like this. 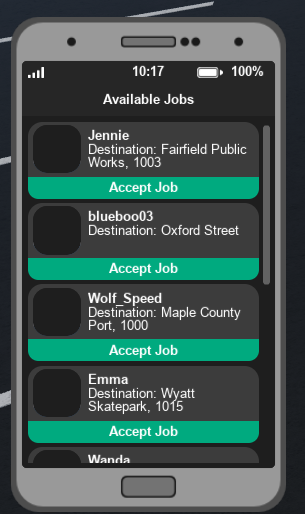 When you accept a job, you will see a green and a red marker, marking the start and end point of the entire journey. The pickup point will also be displayed on your screen very similar to EMS calls from back in Patch #5. Driving to the location will update on your phone app to show how close you are to the pick-up point. 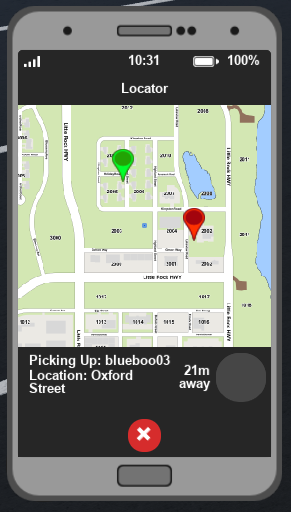 Upon reaching the location, you will see a flashing green box where your car has to be in park for the AI to safely enter your vehicle. When the AI is inside, you will be able to drive them safely to their destination.

This is the second brand new team that has been introduced to the Maple County universe. (MCU hehe). This team has not been given as much love as we wanted to, but there will be some improvements coming to this team in the future.

At this current time, the MCN team will be strictly for roleplaying purposes. Ranking up in this team is relatively easy, the longer you hold the microphone or the camera, the more experience you get. The experience is totalled up every minute. Eventually there will be more interesting features for this team such as blogging and writing reports at a computer desk to get more XP faster. We estimate to get to the final rank it will take you about 13 days. This is extreme and I do not recommend doing this and waiting for the improved systems. Use this team for roleplaying purposes only!

The MCN team features with the following vehicles.

The MCN team features the following ranks which currently have no unlockables;

Within this section, you will see all of our hard work to ensure all the other teams at least get a little something from us;

All existing jobs such as the Droppin' Donuts and Pizza Paradise teams have been completely rescripted, allowing for longer lines of customers. As far as players are concerned, everything you have been doing previously, the jobs work in the same way just better on the server. The refilling of resources such as pizza and donut toppings have been completely moved to the fridge so that refilling at the fridge will restock all resources from now on.

A completely new and redesigned station for the Fairfield Police Department has been released with whole new rooms and an underground parking lot to book your suspects. Interrogation rooms have been moved and the upstairs of the old FPD station has been replaced with a downstairs? Crazy right? We believe that the new format is easier to get around and should be more logical to where certain rooms are.

After a few community events, we have finally implemented a fully in-game court room so players can RP court cases.

We hope you enjoy this update because the updates are just going to get bigger and bigger! We take pride in making content for you to mess around with and create amazing roleplay scenes. We hope to inspire more imagination and creativity by providing these new features to you. This update would not have been possible without these amazing developers;

We look forward to seeing you in the next update patch and prepare for many more amazing features to come.