I am now the AI Specialist for the game Booga Booga! For this reason my commissions are indefinitely closed. Thank you to all of you who have hired me in the past.

Hi, I go by ImFarley here on the internet and I’m a programmer. I was raised on roblox and created my account at the age 9, way back in 2009 (ironic). I have worked on countless games over the years, some of which were my own creations, and many of which I was paid to work on. I should note that I also am a skilled builder and have been paid upwards of 70,000 robux for single commissions for my building. The same is true for my scripting…small flex

I’ve included my entire working history on roblox. If you’re only interested in my example work, scroll down. I’ve also bolded important things if you’re a TL;DR type of person.

I first learned how to script by dissecting free models in the toolbox. With this knowledge I was able to create crappy little games in which I would develop my skills. My first official game release was called “The Final Frontier” and was made public in 2013. It received a few thousand visits, but like I said, it was crap.

However, eventually I would be formally taught in high school / college as I took various Computer Science classes. Some of those classes include but are not limited to: C++ (2 years), Visual C Development (1 semester), Java Programming, Game Design, Computer Science Principles, Python Programming, and I’m sure others that I have since forgotten about.

https://www.roblox.com/games/190787955/The-Horde-Paused
The first game I ever released with any real steam behind it was called “The Horde,” a zombie wave defense game that made no apologies for ripping off Call of Duty: Zombies. It released in late 2014 and received around 18,000 visits and a peak concurrent player count of 65. I know this is practically nothing by today’s standards but at the time, for someone with no robux to advertise with, it was pretty good. I should also note that I was the only builder/scripter/designer for this game at any point.

I haven’t visited this game in years, so I imagine it is probably broken like many of my older projects.

https://www.roblox.com/groups/1032932/One-Up-Studios#!/about
It was around this time that I would found my first game development studio, “One Up Studios,” which still exists today although is currently dormant.

https://www.roblox.com/games/344042353/Boundless-ALPHA
I would spend the next 3 years working on a hugely ambitious project called “Boundless,” a sci-fi life simulator game. The vision for the game was simple: the player should be able to do anything. The game generated 10’s of thousands of robux in revenue over it’s development cycle, almost entirely from paid access. Eventually, the game would die due to a myriad of issues, the main one being me moving off to college and having to work an awful job at the same time.

Around this time, I took a break from scripting on roblox other than for various small projects to generate quick revenue. I spent a large amount of time working with other developers during this period for the sake of building interpersonal skills in a game development context and focus on building. Also during this time of hiatus I coded off-roblox.

https://www.roblox.com/games/2628440038/Christmas-Present-Simulator-2019-PETS
This is one of those tiny projects that were made to generate revenue. This game was made in about 2 weeks with my good friend and fellow scripter, @Codesense. While he originally did the majority of the code for this game, in November of 2019 I went through and re-scripted the game almost from scratch in order to optimize it and prevent loss of player data.

In mid-late 2019 I made my return to roblox, a better coder than ever. Work from that year will be listed below under the “Examples” category.

https://www.roblox.com/games/4599829831/Blox-Battle-Pre-Alpha
https://gyazo.com/ce1a67db7e12b994d9fcab48c744558f
https://gyazo.com/9ae590cdbcd483df6e4b3c35ecf9f3d5
My most recent project is a re-make of the Classic Blox Battle genre that existed way back near the birth of Roblox, but modernized. I am working on this with another good friend of mine, UGC creator, EBR builder, and overall great guy, @Urbanize.

The game features a custom toolbar made from scratch, complete datastorage support that clears un-used asyncs, elegant character customization, various custom gamemodes, custom weapons that I used with the assistance of an excellent public module called FastCast by @EtiTheSpirit, and perhaps best of all: the entire game is scripted modularly. Honestly, it’s a joy to look at the data structure.

In order to cut down on potential lag, all weapons handle replication on the client. The server is just a messenger that verifies no dirty client is lying about their hits.

https://www.roblox.com/games/4448835920/Tower-Defense
This is just a little demo I threw together. Towers replicate across clients instead of the server. There isn’t really much to see here other than a little test shop I made to place towers down with unique effects. For example, the ice tower slows enemies for a couple seconds and the fire tower deals damage over time.

https://www.roblox.com/games/4123646410/Portal-Runners-Pre-Alpha
This is a 3rd person looter-shooter RPG that I work on in my spare time. It features a custom character controller that locks third person, randomly generated dungeons with a custom algorithm designed by yours truly, and an inventory system that models after the Destiny games.

Note: The dungeon generation occurs at a separate place in the game “universe” so you won’t be able to see it for yourself if you play the game. I have included an image of the generation. 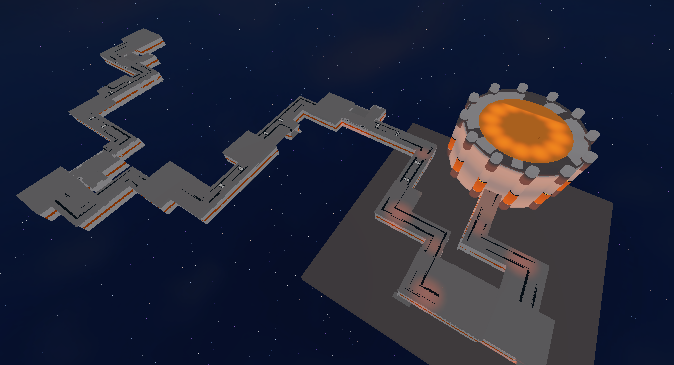 So far in 2020 I’ve been fortunate to land some really exciting opportunities! I can’t talk about many of them yet but I’m now in talks with some names from the front page and otherwise. If you need a more direct reference from a respectable source, I would be obliged to get you one!

I code on an almost daily basis. I work a weird job that doesn’t have consistent hours, meaning that other than for my schoolwork, I have a good bit of free time.

I’m currently looking for both % based opportunities and also direct-payment commission work. I prefer robux payments for tax reasons, but USD is also a possibility.

I know my portfolio is not very extensive. I assure you this is due to my hiatus and not a lack of skill. Many of the prototypes I have developed over the years have since broken and who wants to show off something that doesn’t work? I have many people that I believe would vouch for my abilities, and I hope that you reading this might become another one of those people some day.

Beyond my coding ability I make a conscious effort to be as genuine and friendly a guy as possible. Whether or not we end up working together, I hope you do well in your endeavors and find success.

Discord is my preferred means of contact, but I will also reply to any messages here on the dev forum: ImFarley#7832
Twitter: https://twitter.com/ImFarleyRBX

Anyways, that’s it from me!

I’ve known Farley for years, he’s a good person to work with and he knows his stuff.

Do you have time to work on a large project?

I’m open to work on any project if it pays or if it’s something I think will succeed!

Commissions are now re-opened for direct payment projects only.

Thanks in advance for your interest!

Just finished up another commission.