I don’t mind removing the Legacy option but at least provide a setting that mimics how Legacy looks while using Voxel, Shadow maps and other new future options, I’m pretty sure a lot of us wants our games to look the way they currently look.

(Compatibility isn’t a viable option for me, and it’s probably going to be removed soon iirc)

I think this can be fixed by adjusting the contrast based on the Y-value of the sun’s direction. I’ll look into it more when I get the chance.

Any updates on that? Legacy is going to be replaced really soon.

This is actually one of the few things suggested that I actually agree with; being able to pick and choose what lighting features are enabled rather than having a bunch of preset lighting modes. For example, being able to turn on shadow maps but “turn off” HDR or have legacy tonemapping with HDR. I’m not sure how doable something like this is, however, as I have no clue what the lighting engine is like on the backend.

Im most excited for when all lights will create shadows

(Compatibility isn’t a viable option for me, and it’s probably going to be removed soon iirc)

We don’t have plans to remove Compatibility - the entire point of this mode is to do our best to automatically port the content to the new system while doing so in the way that we can support long term.

Okay i understand better now thanks

Update: Legacy was removed, all games set in Legacy are now running in Compatibility.

Technology.Legacy will not be coming back ever. Did you not read what @zeuxcg said in the posts above? Sorry if this comes off as rude, but you need to read before you post. There are a number of reasons why Legacy is bad for Roblox (like a 5% performance decrease) which contribute to it’s removal.

also, this was delayed specifically to work out the kinks in the system, so there’s been more than enough time to transition.

In other news, yay future

although i’m glad that the roblox team is going to keep the compatibility mode. at least all the old games won’t decompose even more by becoming pitch black.

While it is a bit late I still disagree with this change and feel it should of been worked out from the visual bugs, I also see it pointless to reduce render times with this when popular games will use the other 2 lighting effects that have that extra render that was removed by this change, personally my players have been unhappy about the changes, however if the bugs can be fixed I’m sure it can be utilized better.

I’m kinda disappointed with this,. There is a bit of a noticeable difference between the two lagacy looks good in different situations if not better,. I want to do a comparison between the two on one of my builds before it’s gone please

RIP Legacy
20XX - 2019
A loving and caring lighting engine
“He served us well”
He is survived by his 3 children: Compatibility, Voxel, and ShadowMap (and a fourth on the way)

I know that this step is to improve Roblox, but I am really going to miss legacy. I had to work hard to successfully change all the lights of my game to look good with compatibility and I will really miss dark tones of neon, which I used a lot.

I think that this is helping the future of ROBLOX. I think Compatibility is a great option.

Some of you are complaining that ‘compatibility doesn’t look right’ or ‘it breaks the visual style of my game’. Now, I don’t want your games to look sucky (I’m a bit of a lighting nerd myself), but I don’t think you’re getting the idea of Compatibility fully.

Compatibility is not, and should not be, the lighting engine you design for. It’s a ‘quick fix’ to make sure that older games on Roblox which aren’t maintained don’t end up with wacky lighting under the new lighting models. You’re not meant to use it - it’s just the default option to make older places not-terrible.

The engineers and many of us have been saying this ever since the beginning: you should have started moving to Voxel and ShadowMap long ago. This isn’t some rushed change - you’ve had tons of forewarning, and tons of time to start switching. This was even delayed for a good while longer just to make sure all the bugs were gone.

We are tired of restating this - don’t rely on Compatibility, that’s not what it’s designed for! It’s not meant to look identical, it’s impossible for it to look identical, the engineers will not spend tons more time trying to make it more identical. New games should be using the new lighting engines, and there’s already solutions aplenty for your common issues while transitioning.

Use Voxel and ShadowMap. It’s nicer over here anyway

Hey. I cannot reproduce that problem that you are describing… In my tests legacy is brighter then Compatibility. (Yes we still have Legacy

internally for a while)

Could you please PM me the file with place that does have the repro? I know it may be hard without legacy now. But I’d like to investigate the issue. Or just provide more detail on how did you get the problem. Thanks

This was the only case where I could get compatibility darker, but the difference is pretty subtle: 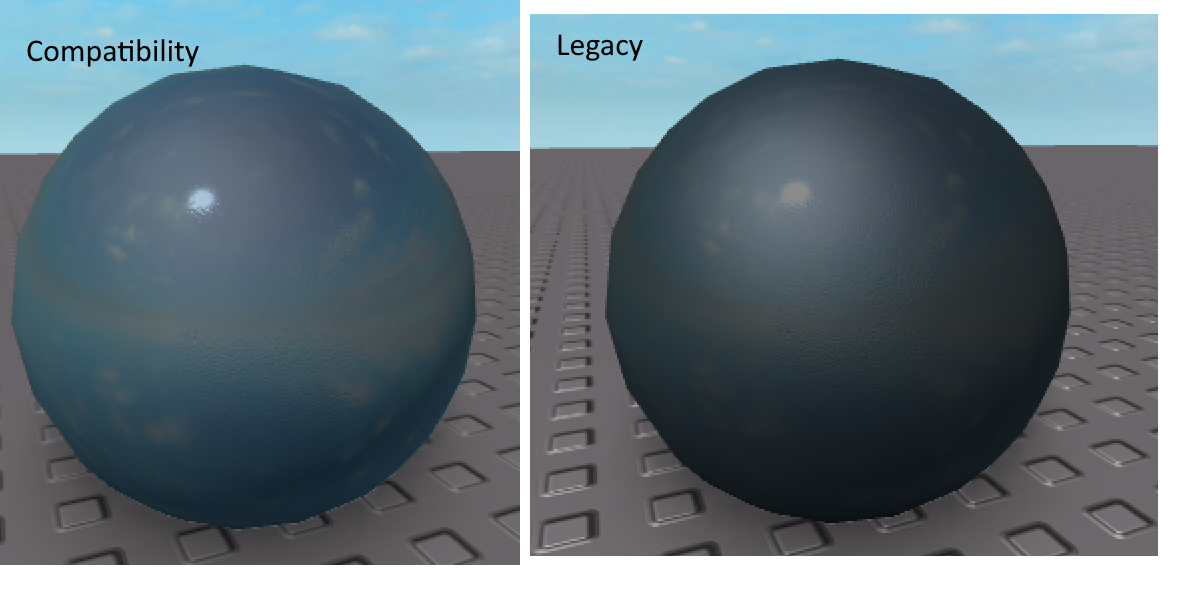 I’m confused on how the difference is subtle.

For instance, Plastic looks blown out with Compatibility & all of the other current lighting modes, due to the entire face being hit by the sun being turned white.

The new lighting modes also lack pseudo bump mapping with textures & decals, which is quite unfortunate. I’m aware custom materials are coming, but not entirely sure how they’d be implemented. A new texture object with properties for a normal map, spec map, and albedo map, or is it a new object that puts said custom material all over the part like current materials operate?

Well first I had to really mess around settings to get this picture (this is the worse case scenario), but overall yes, you are right. Yes compatibility may look worse in some cases.

Compatibility’s purpose is to not break the games as we remove legacy. We tried to make it as good as we could. Devs are encouraged to switch to voxel or shadowmap. Next stages of Future is bright will be compatible with them.

We are working on improving the reflections and specular highlight in voxel, shadowmap and what will come after.