As a Roblox developer, it is impossible to follow the replies on critical bug reports. As a developer it is obviously important that the platform is up. When the entire platform is down, someone will make the topic that goes viral, and from there the replies turn into a discord chat room. Sometimes even the very creators of these topics regret making them, developers should not be discouraged from posting bug reports that affect them as a developer, regardless of how big or small they are.

The most recent one got 108+ replies in less than 20 minutes. All of them are “can confirm” replies or testing on different devices/browsers even though 10 different users already attempted prior, but even the first user testing is unnecessary since platform going down is a global issue. It gives a false sense of contribution.

So considering that this is primarily if not only for critical bug reports, they should be closed instantly if marked as critical (I believe most regulars have good judgment, if they misuse it it’s their fault as they prevent new information from being added to non-critical bug reports), and only Roblox staff can reply. Otherwise they could just be moved into #bug-reports (the parent category) since only regulars can reply to open topics directly in #bug-reports.

If this is added it will improve everyone’s experience since only useful information will be the most prominent on a topic.

If this cannot be done, then at least an option to filter by the Roblox staff group, similar to how you can filter replies by user, would prove to be a massive help.

Please, making that thread was a mistake, my notifications has just been (2) for about an hour

I mean I don’t want to sound mean but didn’t you post the link to it as a response to an account that is being followed by a lot of toxic people and trolls on Twitter? I do get wanting to spread the word and all but this only made it worse.

To the OP:
Fully agree with this. One thing that really can be done about this is to limit replies in #bug-reports to regulars whick unfortunately does restrict a critical category only to users who have been on the site for a while and understand how things operate. This would just make people complain about the lack of access to the category for others.

followed by a lot of toxic people and trolls on Twitter

ok i cant defend myself here

I was just about to make a topic about this until I saw this!

I flagged several replies in that recent bug report topic about the Roblox crash, and out of the 270+ replies that have been created, not one was useful to engineers.

People posted memes about Roblox being down, accusations about Brookhaven being the cause of the incident, replied with extremely generic replies such as “I have this”, etc. Nothing was useful to anyone in that topic.

I show full support for locking replies in #bug-reports:website-bugs and #bug-reports:engine-bugs to Regulars only, but some subcategories like Developer Hub Issues or Studio Issues should still be open to replies by members, since they aren’t misused that much.

To fix this issue, developers simply need to read the replies before replying themselves. Many people repeat the same things, but in different words. This is not an issue for Roblox themselves to fix, but rather the community. Read before replying. Just remember that and we should be fine.

This also falls under the category of people posting a topic without searching if something already exists on the matter.

I too, wish to believe it would be as simple as that. “Reading before replying” being a cultural expectation from users. Obviously no amount of software engineering could 100% fix the problem and “whip” users into shape, but at least a way to greatly minimize its impact (like the proposed closing of critical bug reports and/or filtering by Roblox staff group), would prove to be beneficial, since it seems to me that the developer engagement team want to be as lenient as possible with moderation, so flagging doesn’t really work for this, since it only works for getting rid of individual posts.

There have been requests and discussions on the forum before that address this problem more cleanly and at the root, too. DevRel has notoriously not taken this feedback into account and under delivered on the promises of a post approval replacement. I believe there is only one choice for the time being.

In bug reports, especially critical bug reports, the vast majority of lowball and spammy replies come from new members. This is bad and follows the reason of why platform feedback requires you go through post approval: engineers look at these topics and shouldn’t have to waste an hour scrolling through a post mostly full of can confirm (which doesn’t really help engineers in cases of critical bug reports). Here are a few examples I gathered from looking at some of the top topics in bug reports: …

DevRel is notorious for not taking feedback from the side that isn’t fully for blasting the doors open to anyone who has a Roblox account. It is a shame because the forum would be much better in my opinion if we did have some form of spam prevention from users who aren’t accustomed to the forum’s operation.

Tbh I would also say just cut it for members, but someone is going to jump in and say that it would be toxic/elitist, even though trust levels literally exist for that reason, showing who has more trust with more forum permissions. So I tried to be as inclusive as possible.

Any perception of “toxicity” in the divide between users of different trust levels is not even the fault of the users in my opinion, they way they are structured (which was decided by Roblox) only reinforces any elitism.

There’s not enough visibility for staff replies, they get lost in all the irrelevant replies. Even if they click “Add Staff Notice” for the highlighted banner, it’s still invisible and requires me to scroll through the thread. There should be a feature to make them more visible, such as being able to collapse other replies.

Same for replies with relevant info, such as crash logs etc. These need to be made more visible. If I had to come up with some ideas, slow mode enabled by default on all bug reports might cut it down. If you had something relevant to add, waiting 15 minutes isn’t a big deal, if you’ve got something irrelevant you probably won’t post your “me too!” re

Topics for major outages should be closed by moderation as they popup. SRE etc find out long before any developers that there’s a major outage.

THIS! It has been asked for so many times to the point where people don’t argue it anymore because of the lack of response from DET. Wjile it is against the open doors policy, there has to be something done about the problem and reduce the time that engineers go through the posts instead of engineering. They’ve done it already so why not just keep going with it. 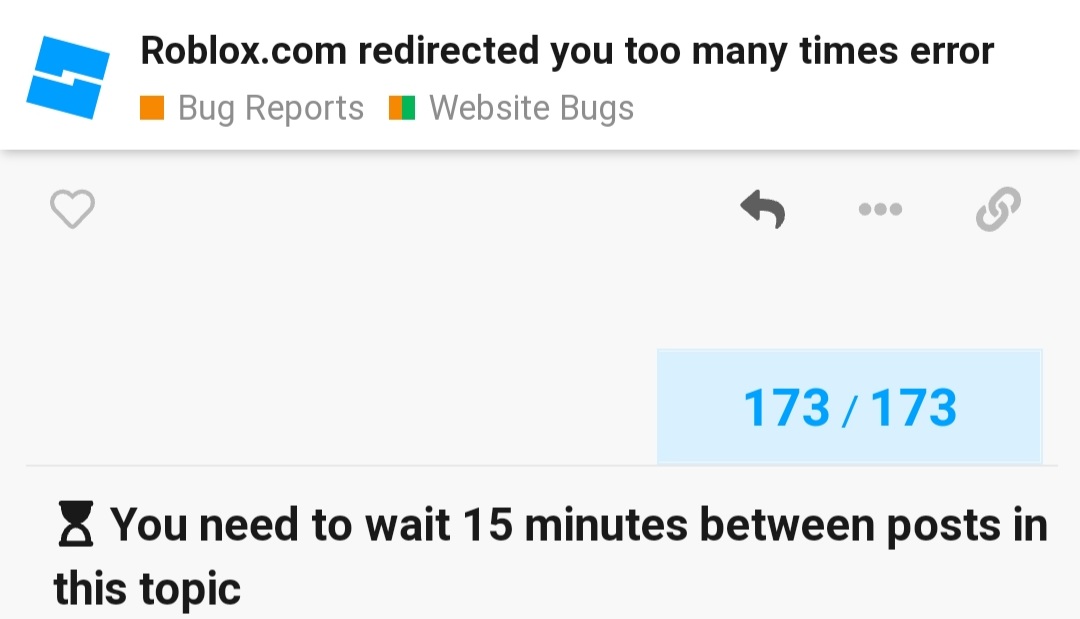 You now need to wait 15 minutes between replies! This is a great feature as it prevents players from spamming and/or turning the bug report topic into a chat room.

I show full support for locking replies in #bug-reports:website-bugs to Regulars only

My question is why just #bug-reports:website-bugs as most of these critical bugs are under #bug-reports:engine-bugs from what I’ve seen.

You know what, locking #bug-reports:engine-bugs replies to regulars+ would be fine too. Let me edit my reply.