Does roblox allow us to upload R15 animations with a different hierarchy?

This brings me to my question: if I am able to change the hierarchy of the R15 rig then I could get around this. Can I do that, and would there be compatibility consequences with accessories and the like? 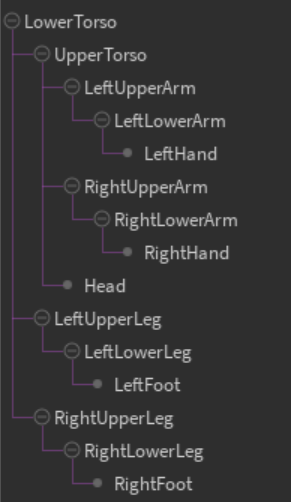 Yes. There would be quite a few problems. Gears, hats, UGCs, etc. would not be proper. Unless you plan on welding the tools yourself, which can be quite a hassle. I might be wrong, however, as I have never experimented with changing the hierarchy of the parts. So you could try it, however I am pretty convinced that you might run into some problems.

Also, I am a bit confused. Are you using Studio for the animations? Because I’ve not used any plugin that looks like that. Do you mind providing me the name of the plugin?

Yeah I’ll probably have to give it a shot to know for sure, if nobody can give a definitive answer. Thanks for the reply!

The first image is the roblox default animation editor(Inverse Kinematics tab shows the hierarchy), and the second image is blender. Out of default, moon, and blender, blender is by far the best in my opinion. Here is a link to the devforum post explaining how to make animations in blender and import them back into roblox: Blender rig exporter/animation importer

Thanks! I haven’t had much experience with blender, so I think Moon Animator suits me for now

Also, do you mind showing a video of what your animation would look like? It would be helpful in solving your problem I think.

Essentially, the lower torso and upper torso are independent. So in the above hierarchies I showed, instead if the Upper Torso being a child of the Lower Torso, they would be siblings. Players will be changing their walk direction very quickly and often, here is a video demonstrating what I am trying to achieve: https://www.youtube.com/watch?v=B5HU0AchrBQ&t=242s

Woah. Making such quick animations would be pretty difficult. I think this goes more on the programming side. I usually animate in R6, so the hierarchy is different for me (Upper Torso (‘Torso’ in R6) is parent for all parts), so I might be a bit inexperienced. However, I think if you only animate the parts from the upper torso (Upper Torso, Hands, etc.) , without having any key frames on the other, it might work out. Then again, you’d have to change the hierarchy for that. So I think that’s the only way to get around this problem. You might encounter problems with UGC items and tools, so I think you’d have to change the welds and handles for that.

Ok, so there might be another solution. You could try to make a custom rig, that’d be to your preference. This would be a bit glitchy too, but I think it wouldn’t be as problematic as changing the hierarchy itself.

Not really interested in using a custom rig. I’ll see if anyone else can give me a satisfactory answer. Thank you for the help though, I appreciate it.

I rerigged the R15 model so that the Upper and Lower Torso were siblings under HumanoidRootPart(working off of @Den_S ’ blender animation rig. This didn’t work, though, and it forced the upper torso to turn with the lower torso as if it hadn’t been rerigged at all. I am a bit lost for what to do here. Anyone got any ideas of how I can achieve my goal?