Empty servers despite the option for roblox to fill them as much as possible toggled!

You can just go to the game servers tab, it is a 100 player game, yet it constantly creates a bunch of mini servers consisting of 4-5 players. This can cause people to not be as engaged because the game is meant to be played within a populated setting as it relies on player interaction.

As the setting “Fill each server as full as possible” is toggled ON, I figured this would mean that Roblox would only create new servers after the previous server became full. 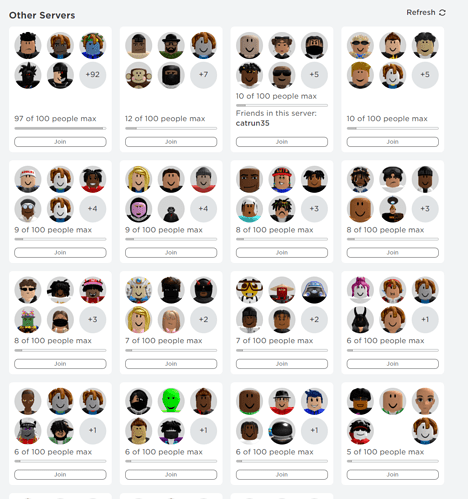 This is one example of many, it happens on a consistent basis and I never put much thought into it. However I am very curious to what the feature “Fill each server as full as possible” actually does if it does not do that.

I could possibly make a lobby which teleports people to individual worlds which are its own world / place though connected to the entire experience. Example of games that do these are pretty broad on Roblox.

Is there a lag issue caused by more players that Roblox is detecting (slow servers)? That might be why they aren’t putting more that 10 players into the servers.

I am unsure. The server tends to run good though on full 100 players. This issue was even relevant when I had 60 players.

Hi marcus! Thanks for reporting this. This looks to me like it may be the same problem as the one discussed in this thread:

I have a game that relies heavily on its social experience. The map is very large, so when there are less than ~40 players in a server, it often feels empty and makes people bored and want to leave. [image] However, when I set it so that each server fills completely, it doesn’t seem to work and creates smaller servers, which completely ruins the experience for the players in those servers. [image] I’m not entirely sure if there’s a workaround to this issue, but it would be very helpful if …

Fortunately, this means we plan to work on a fix for this in the near future! I’ve posted on this thread I’ve linked some more details, including likely causes of what you’re seeing.