There’s still an existing bug where we can get leaks when new avatar appearances are loaded. The original thread can be found (here)[Every time your character dies it leaks memory (up to 500 MB, probably infinite)], where dying would lead to memory leaks. Now, loading character appearances still leaks memory. The reproduction can be found (here)[Die every second - Roblox]. 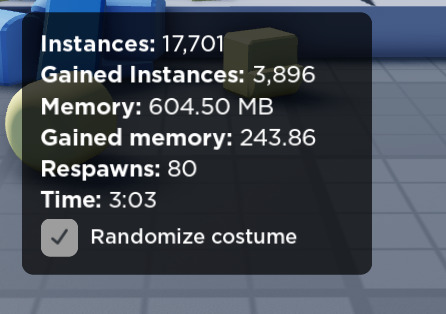 You can also reproduce this by joining this game and clicking around your preset costume outfits OR you can also use the “Randomize costume” button which will randomize your costume.

Check out Die every second. It’s one of the millions of unique, user-generated 3D experiences created on Roblox. as the title describes

Note: Eventually the reproduction levels off since it’s not loading more hats, but with a better list of Ids, I’m sure I can get it higher. 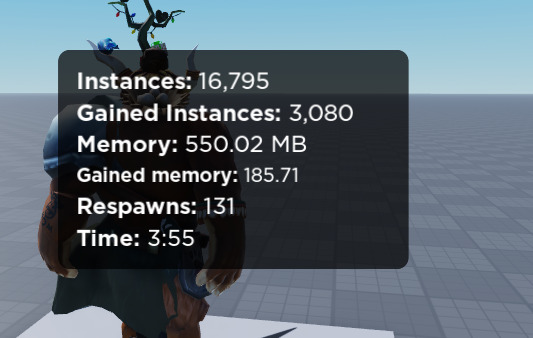 Effectively, every time a new player joins the game, it leaks memory if their outfit is different. Reproduction in live looks like this:

I expect that the memory should not leak when a new character appearance loads, and then gets unloaded. Players loading with different appearances is a very consistent thing in Roblox and should not leak memory.

The memory appears to permanently leak per a character outfit.

You can see a video of this here: 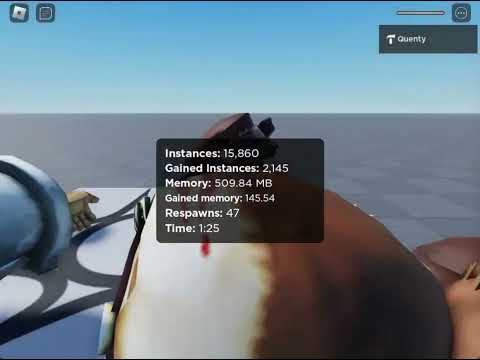 I’m pretty sure I’ve observed that assets loaded on the client (meshes, textures, etc.) are never actually unloaded (because otherwise the client would somehow need to know if it ever needs the asset again, and if it guesses wrong it needs to redownload the asset potentially many times). Maybe that same behavior leading to this effect.

Wait, is this not just model/asset caching for things so they don’t need to load again? This sounds intentional.

Correct me if I’m wrong as I have some doubts I am right on that. If I am right; there definitely is a problem with the current system of caching assets for later use.

Does this happen with changing a character’s outfit’s scaling (which should not affect memory at all)? If someone can manage to crash a server by changing their scale using the Roblox avatar editor and resetting; this is a massive problem. Heck, someone can create alternate accounts that join off each other and just keep having new outfits to slowly add onto memory and crash the server.

This shouldn’t actually be an issue;

Finally there was a comment by @Abcreator “Just want to clarify that this should not apply to assets preloaded via ContentProvider:PreloadAsync function, assets loaded via that function should always be ready at a moment’s notice in memory.” This is more of a hint to the system where we perform best effort. The reason is that if we were to adhere to this rule, this cannot always work and lots of low end devices would go out of memory. For example some experiences preload say 1000MB of data, while the system only has 500MB of free memory available… so at that point we try to fidelity and/or evict resources that aren’t actively used.

Apparently the engine will not opportunistically unload resources, A.K.A. it’ll only worry about resources that aren’t being used if it’s getting too close to it’s memory limit.

If it’s well under it’s memory limit, then it is sort of wasting network usage by constantly re-downloading assets. The first example that comes to mind for me is CS:GO or TF2, which have “texture streaming” options. It’d be incredibly annoying to see textures that you’d expect to be cached to some extent constantly be blurry if you haven’t seen them for a few moments.

Hm, yeah, it probably is just optimistic meshes not being unloaded. I’ll need to test under more memory pressure.

Thank you for the excellent repro case! I was able to jump in and look at the issue quickly and directly.

I can confirm we are seeing cache behavior here. The test case is small, so it takes a while to see the various caches all even-out but they do. I’ve got some internal tooling to flush the caches and yep, the memory dropped back down to where it was during the first few cycles. Reminder: it’s not only meshes. LUA, network messaging, the instance count maintenance all have independent cache budgets, garbage collection periods, and retention behaviors so summarizing overall memory usage is a tricky business!

Let me know if you have any new observations or test cases because so far I’ve not been able to find any legitimate leaks. My takeaway is that Roblox memory tools would benefit from a “flush all caches” button, even if it merely serves to remind the user of caches existing and give that whew! feeling of seeing the memory come back down.