Exclude region3 from another region3

Hello developers,
I am working on a few functions that should spawn some object (function parameter) at a random position within a Region3 or part.

Now the problem is that within that Region3 there can be other buildings, which I’d like to exclude from the region so the object won’t spawn there (so the random position will not be set within that building).

I’ve heard that WorldRoot:FindPartsInRegion3 can take up lots of resources.

I’ve looked on the DevForum for ways to make this, such as:

(and of course, I included Roblox keywords)

But couldn’t find anything related.

Illustration of my problem: 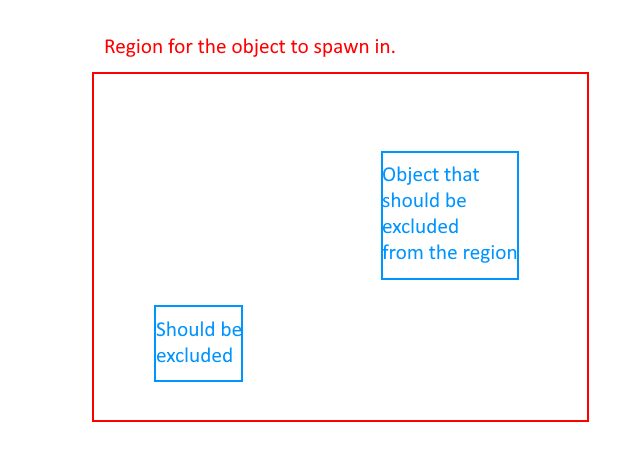 Is it possible? Is there a way to achieve this or a better alternative?

Is there a way to do that? Or an alternative?

Here’s another drawing to explain the issue: 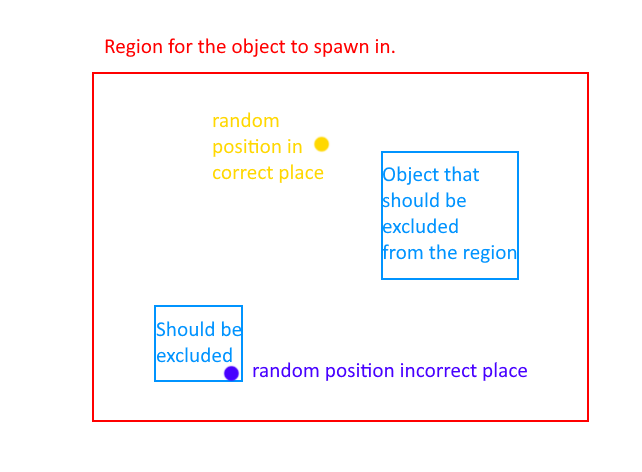 You can see the purple dot is a random position inside the region I want to exclude.

I can think of two possible ways:

Both seem like a massive work around but it’s all I could come up with.

You could place a single parts all over the map making sure they are not to close each other and to the excluded areas and then select a part at random and spawn the object in a random position within a certain radius of the selected part.

I’ve thought of that, but within large maps, it is very hard to do.

Thought of this too, the problem is that the massive use of FindPartsInRegion will create lag and performance issues.

You could make multiple regions3 areas around the excluded areas, select a region at random and then find a random position within that region to spawn the object.

Although lots of work, that actually seems pretty reasonable.
I think I’ll find the excluded objects, and create regions around them.

Thanks for the help