I’d be a bit concerned about thus, considering the way you described your moderation team.

Besides, who is going to fill out an optional questionnaire that can result in moderation action being taken against their game? Whilst I see the attempt to level up the age range of this platform, it could’ve been done better.

Why would I fill out an optional questionnaire that can limit my game’s reach and lead to moderation consequences ?

Gets straight to the point and I couldn’t have worded it better myself. Only thing I will add is that it does seem rather extraordinary that Roblox would like people to trial a tool where you can easily end up moderated for getting something slightly wrong.

Will random games that are created together with the account have to fill out the form in the future? (like “JohnDoe123’s place”)

Its been two years with this update.

To be honest, it’s better if the developers chose their age recommendation manually. Certain aspects like violence are understood differently, depending on their severity*. Or maybe there’s an aspect that decides that the recommended age to visit the experience game as +16, however the questionnaire not asking about it, which decides another age recommendation instead. It would be better if developers could clarify what their games contain (PF as an example, violence, blood, etc…), rather than asking a whole bunch of questions and then seeing games like Arsenal or Item Asylum (a bunch of example games involving fighting) rated as +16, when even Fortnite is rated +12.

gosh this made no sense

Thank you for the question, we want to make sure that all generated Guidelines are accurate and will work with you to ensure that.

The questionnaire is a compliance tool and an important part of getting your experience in front of the right audience. We are relying on creators to give us correct information so that we can generate accurate Guidelines. For example, you have the option of using our Policy APIs to dynamically tailor content to keep it compliant in different regions or can choose to hide your experience in regions where the content is not permitted.

If we find a discrepancy between the questionnaire submission and the content of your experience (i.e. answers state it does not have paid random items, when it does) we will contact you to give you an opportunity to revise. However, if you intentionally misrepresent your experience, you may be subject to moderation consequences.

We’ve updated the FAQ to reflect this.

Why should you promote your game to all users if it’s not appropriate for certain groups? I think this is simply making the platform safer; so when you believe that your game deserves all the attention, Im going to think its a game like adopt me with no guns/blood/killing/death/difficult language/ gambling/ and anything else that a parent would not want their child to see.

Is making your game accessible to the right audience, not an upside?

how could you be happy? This is limiting what younger players can play. Just because someone is younger doesn’t mean they can’t play because they aren’t the “intended audience.”

For example, when I was younger, I used to play a lot of shooter games that were teen rated/rated M games. Was I the target audience of those games? Hell no. So why should you limit who plays your games when they aren’t the target audience. Even still to this day, im not 17+ and yet I still play rated M games. Why? Because I enjoy them. Now imagine me or someone else not being able to play our favorite games because we aren’t the intended audience. You shouldn’t have to in force this onto your players and prevent them from playing their favorite games because of them not being the intended audience. Anyone can enjoy a game, no matter their age.

Also, Questionare is very very weird on how they work. If your game has blood, it’ll automatically be 13+. Why? Why do you have to shield <13’s from seeing blood. Its not like they already know what blood is. But no, we must shield them from knowing about what makes them be alive and what is literally in their bodies, the evil BLOOOD. Like you can have the least tame amount of blood, like a small blood bubble and your game will be shielded from 40%+ of roblox players.

Im not sure where it stated that just because the player is younger than the age recommendation they can’t find and play those games, but the label is important to highlight to parents and users what they should expect from the game. ALL games have a label like those teen-rated games you played. Just because you feel like it’s safe to play doesn’t mean that other people of the same age group will agree.

I can’t see my group games on the creator dashboard can someone please let me know how? Thanks!

my post was stating just because some kid isn’t the “intended audience” of a game, that they should still be able to play it.

It also mentioned how flawed the system is. If a game has blood, the game is automatically put into a 13+ age range. Which could kill a game if it’s main audience is people who are under 13. There is no context whatsoever on how intense the blood is. I think we can all agree that a slight blood cloud when someone is shot isn’t “13+.” I can understand the positives of this updating. But I was simply stating how you shouldn’t use this as a barrier to prevent younger players from playing certain games, some will find games safe to play while other may not like you said.

I think it would be a great move of Roblox to utilise the PEGI Rating system rather than coming up with their own. At the end of the day, part of Roblox’s mission afaik, is to teach people things about this line of work. Introducing the PEGI rating system would therefore be a pretty good choice as it is used commercially.

The post stated that the age recommendation is based on official industry standards. Searching this up makes this a true statement. Games with even minimal blood will be 13+

Additionally, some countries may have stricter control on what is allowed in content in general and/or in certain age groups.

I think the parent is the one who can determine if you can play 13+ games when not 13. Based on how they described it.

Will random games that are created together with the account have to fill out the form in the future? (like “JohnDoe123’s place”)

Only if you got content there ig? Don’t see an empty baseplate needing that.

how could you be happy?

I am happy because as an adult developer on the platform there are no games on the site that cater to my age group. I’m also happy that it is limiting what young people can play. Imho, there’s a few games that while they present themselves as kid-friendly, they certainly don’t belong in the category.

Ok but why would anyone want their game to be rated 13+ if it doesn’t give them any extra leeway in terms of content and all it will do is hide the game from <13 users?

Read the post again as it answers your questions. This is going to be required in the future whether you like it or not. So, you’ve got to properly rate your game using the industry standard ratings like everyone else. Basically, we’ve been off the hook when it comes to rating until now.

Why is it roblox’s job to regulate what is violence vs reality its up to a user’s parents to make sure they know what games their children are playing, a site such as roblox is not going to introduce a life of violence and crime.

I don’t understand why a lot of people here think this is a bad update. I’m very happy that this is finally coming out, because this is most likely the first step of allowing games to give their own age ratings. This update has been announced 4 years ago in RDC 2018. 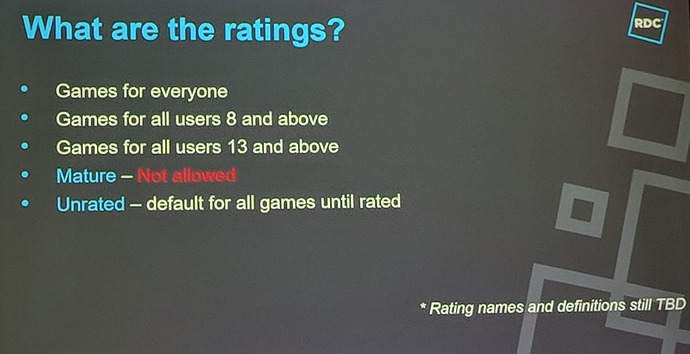 I’m hoping that this will mean that Roblox is attempting to allow developers to create more mature games aimed for teens and adults. It shouldn’t mean that kids are left out, and there will always be plenty of games that kids can enjoy.

Also, a lot of people seem to feel as if parents are required to choose. I highly believe that playing mature games above an age limit will require ID verification.

this will probably be really helpful for some developers like myself