This is a great update, now debugging will be easier than ever knowing that I won’t have to go through the trouble of running my tables through a special function in order to view the contents. Along with this, extra filtering and search capabilities will make our lives so much easier when looking for specific things while debugging. It’s great to see that roblox is listening to our feedback and doing what they can to make developing in studio as efficient as possible, keep these great updates coming!

Ah yes finally no more using HTTPService every time I need to debug!

This new output takes up wayy too much screen space. Do we really need to have the “context” column, when we already have the green/blue bar on the left of every message?

I’m not a fan of the pretty-printing. This makes it extremely difficult to distinguish between a pretty-printed value and the printed message.

Case: I have a testing module that returns rich results. This results table implements __tostring to spit out a large multi-line message of the entire results of the test in a human-readable format. In turn, sub-tables also implement __tostring for fine-grained inspection. This does not play well at all with the pretty-printing. Information gets repeated over and over again, with pretty-printed fields interspersed seemingly arbitrarily. 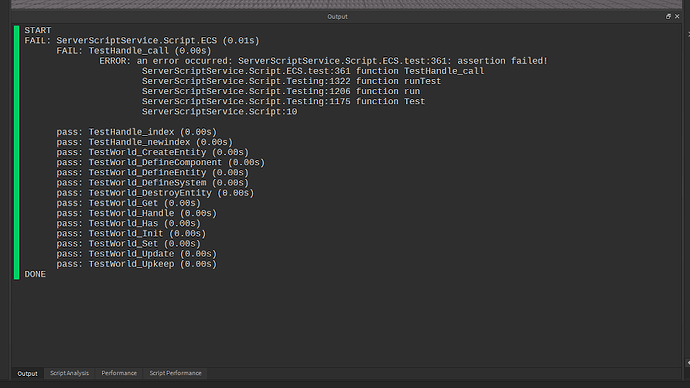 Instead, I think messages should be printed normally, as determined by tostring. If a message derives from a structural value like a table or instance, a separate column or row should be available to inspect its content, reusing the same inspection UI as the debugger. Perhaps an option to copy a pretty-printed version to the clipboard can be included (actually, that would be nice to have on the debugger as well).

I really like the QoL debugging features we’ve been getting recently, for plugins and games. The features in this update are extremely helpful - no more copy+paste of output to search for things!

Printing tables too, amazing! But I’ve noticed that if you print a table with anything else in a single print, it shows the memory address of the table.

I assume this is intentional, but just wanted to point it out.

+1 for cyclic tables, tried and disappointed.

Who else just ran HttpService:JSONEncode() on their tables to print them before this update? Because I know I certainly did. No longer do I have to script like a caveman, and for that reason I feel joy today. 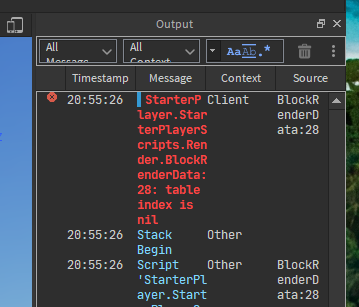 Really happy to see some love for programmers! Also awesome that we can sort through output types. Great stuff and looking forward to more!

Wait, hol up, printing tables? But that’s illegal.
You are telling me, I can now print the content of an entire table without converting them to JSON strings first or making a custom function for them?

That’s the stuff I need, I needed that so much, I am very happy and satisfied with this update, time to restart my studio again.
I must try out this neat feature, the refreshing output window is gonna help me so much.
Thanks so much for this.

This is an awesome improvement, the only thing I want to be removed/changed are the white outlines, they look weird and removed the modern look.

I like it but there is one thing that needs to be changed.

Thanks a lot, it’s infuriating to print a table and just get .
The new look is also a big upgrade.

The output has a lot of useless information. I don’t need an unremovable tab for telling me whether a given message is printed by the client/server, nor an icon, nor a timestamp, nor a filter.

Plus, this is just hideous.

image435×910 22 KB
I never had an issue with printing tables, JSON viewers online do it better than an output window ever will.

Edit: it seems to have significant lag each time anything is printed out too

Edit: none of the issues have been addressed as of A MONTH LATER. Roblox crashed when i was trying to print each iteration of a for loop because of the significant lag. This feature isn’t ready to be released and it better not be.

it will mostly responds

Despite the typo, this is a long needed update! Printing tables has always been annoying, so I am glad we finally can print their contents!

Will Search allow you to search the history of your output after closing the place?

A few weeks ago I generated a terrain seed, and after wanting to expand it a few days later, I realized I lost the seed. I then remembered that a summary of the generation is printed in the Output, but unfortunately I found no way to recover this after closing the file.

Welp, This is some overlapping UI… 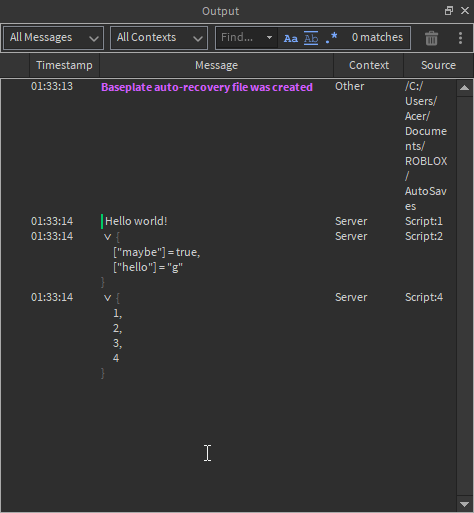 image474×513 9.44 KB
I would like to see some changes made to this, first, being able to disable the columns you don’t need and secondly showing the name of the table when you print a table like this

Once again, thanks for this great update Roblox staff, keep it up