FLEXSignal is a top-performance signal handling system. FLEXSignal allows you to create signals-like instances that you can use for event-based programming while reducing the memory it collects as much as possible without affecting the UX.

FLEXSignal is the first ( as far as I know) system that doesn’t rely on bindableEvents. It uses a cache-based system to lower down the memory collection as much as possible.

FLEXSignal always try to make it easier for you to use it; which it achieves it amazingly using the following features that you can see in the RblxSignals(Default Events).

API AND DOCS1500×250 20 KB
FLEXSignal offers you a rich API to create your own signals similar to RblxSignals without the use of BindableEvents which is simple as if like you are using a default event!

In this section, you will create your first signal with FLEXSignal and know the best practices to follow!

That’s it. I am more than happy to receive criticism or any suggestion that will improve the system.

That’s a really awesome Module. But i have a few things to point out that got my attention while i was reading about it.

FLEXSignal is the first ( as far as I know) system that doesn’t rely on bindableEvents.

That’s sadly not true, There’s plenty alot of other Signal Modules that don’t also rely on BindableEvents - Such as GoodSignal, FastSignal and SimpleSignal.

What makes you think this? Did you do any Unit Tests or compared it with other Signals? There’s a Devforum Post talking about Signals and their performance related to all of their functions.

Besides that, I have nothing else to say - I’m just trying to help you and know more your resource!

That’s sadly not true, There’s plenty alot of other Signal Modules that don’t also rely on BindableEvents - Such as GoodSignal , FastSignal and SimpleSignal .

Well, I think I should change that post. But thanks for that!

What makes you think this? Did you do any Unit Tests or compared it with other Signals? There’s a Devforum Post talking about Signals and their performance related to all of their functions.

FLEXSignal massively functions like GoodSignal for example. However, I will try to do more unit tests to verify my claims.

Besides that, I will always try to improve my module. Actually, I am working on a server-sided & client-sided cache right now that will secure server-made signals.

Good job, it seems pretty good. I recommend adding a couple of graphs comparing the speed of FLEXSignal and competitors.

Generally increased performance in functions such as Connect and Fire, and now the system uses pure coroutines without the use of task.spawn.

The avg processing time for connectandfire 50 attempts in Microseconds:

Nice resource, however, I have one critique. Why do you use an ID system instead of just using table.insert, which will automatically assign the next available space to your value? It would get annoying if you’re using a lot of signals, where you need to keep track of the IDs manually. If you have many scripts using this module, you could easily lose track of how many IDs you have.

Hello Medonox, I know this can be hard to track the signals with the ID system however, it is quite needed to get the signals outside of the script you created your signal in. I am not sure if there is another way of doing that, if you know one, tell me.

With the connections, well, it is for the disconnect function to work.

I am currently in the process of finding another way of doing all of that but in the meantime, that’s all what FLEXSignal got.

Putting criticism here, as this module can genuinely disrupt the workflow of users, raising my concerns.

Now, onto the benchmarks. Fixing the error above, here are the benchmark results using Boatbomber’s Benchmarking plugin: 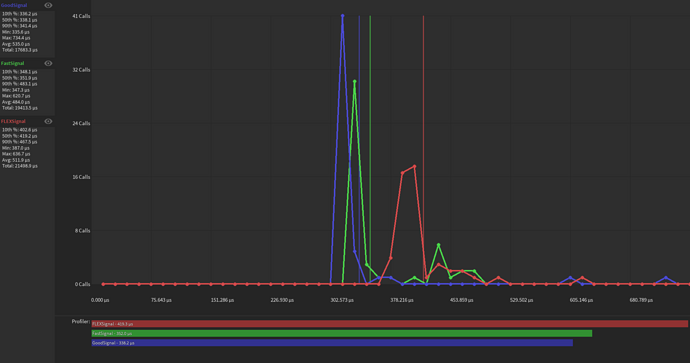 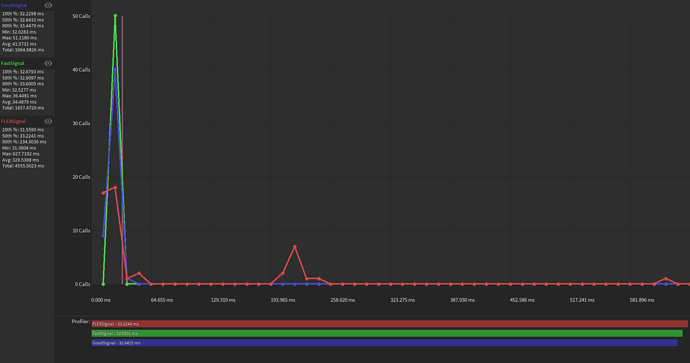 Despite the promises of this being the ‘best signal system out there’ and your statement of it being the fastest module, the benchmarks above show otherwise.

I’ve also done some benchmarking but I benchmarked the shared features between each module and I’ve also found data that proves that FLEXSignal isn’t the fastest.

Code for the benchmark:

Hello Phseph, in this post I will reply to your concerns.

The overall structure is very messy, and makes it hard to work. There is no reason to implement an Id system, let alone force it on others.

Can you please specify why it’s “messy”? Also, there is reason to implement an ID system which is referencing to a signal from other scripts. This is generally to give the users a more freedom on whatever signal they want to reference.

You use coroutine.wrap , which is advised against. coroutine.wrap eats up the stack trace, producing errors whose origins you will not be able to know about. It also creates a new thread for each time you call it.

I am currently creating a thread manager system that will likely solve this issue.

Thanks for the suggestion!

Issue has been solved. the doc will be rewritten in order to keep up with the change

no space in local CacheD={

single-line blocks of code which bloaten the code, such as if self.__mode == 1 then coroutine.wraP(self.__connections)(...) return end

I am just used to this type of coding

. I am sure this doesn’t affect performance, does it?

And same as above, but I will fix it

For some reason, IntValue objects are used for connecting and disconnecting, despite the post being ‘proud’ over it not relying on Roblox OOP objects such as BindableEvents.

Oh sorry, I kinda mislead it. I got mixed between both int and intValue. Fixed it!

I am generally curious, which mode did you use for this benchmark test? All the tests I made were generally for strict-mode. However, the new thread managing system will optimize the lean-mode more.

NOTE: All the fixes will be in the public version soon.

A post on why I am using an ID System:

Most of the people are misunderstanding the real purpose of the ID system in identify signals and GetSignal as well.

Can’t you just use table.insert?
No, and will never try to use it in the future. This limits your freedom on interacting with signals using GetSignal. It will likely return the latest event, which is indeed useless. If you love that behavior then FLEXSignal isn’t for you at all.

Well, then what’s with the ConnectionID?
It won’t be removed, since this will limit your interaction with manipulating connections from other scripts. Again, if you somehow don’t need to disconnect a connection outside of the parent-script, then this module isn’t for you.

Okay, I have a few criticisms as well:

1- Biggest thing that stuck out to me was that you’re missing the signal:Wait() function, creating a whole connection for it to be fired a single time and then disconnecting it is a poor use of resources.

2- As others have said, you should be using table.insert for inserting connections. Not only for convenience, but it makes no sense that you’re expecting a number as an ID but refuse to use table.insert which only allows numbers as indexes. Furthermore, not using table.insert means you have to use pairs to iterate through the table, which is considerably slower than ipairs. The fact that you mention performance as one of your “selling points” but have refused to use table.insert (which apparently is faster than doing t[index] = v) isn’t a good sign.

3- There is a large discrepancy between this signal module and actual Roblox signals. An actual signal has two methods: Connect() and Wait() (the second one is missing from this module). When you call :Connect on this signal, it returns another object, RBXScriptSignal, and it is through this object you can disconnect, check if it’s connected and whatnot. Your script creates a single object on which you have to call Connect and Disconnect using some index the user decides, therefore your code sample will lead to unexpected results:

The Connection variable will be nil.

4- Your type checking is incorrect, you’re expecting an IntValue when you should be expecting a number. Likewise, there’s no checking that the inputted type is one the function expects,

5- In your constructor, you don’t check that an object with that ID exists in your cache, therefore you overwrite the old signal with a new one.

6- I don’t think using a cache in this case is necessary, one who is properly using this module should manage the objects on their own. A cache could lead to unpredicted results, especially given the fact that when calling the deconstructor, the deconstructed object still exists in the table, therefore it exists in the memory and could cause a memory leak. Also, if one of these signal objects were to go unreferenced in another script, the objects from this module will never be garbage collected, which is another source of a memory leak.

In most cases, caches are used to store data that is a result of an asynchronous call (eg. images or data returned from a web request). Since constructing your object is synchronous, it is nonsensical to use a cache in this case.

You also talk about how your cache can allow multiple scripts to access the same object, however one who has proper knowledge of modular programming would know how to and would implement a way to replicate this feature in their own style.

As others have said, you should be using table.insert for inserting connections

That’s actually one of the trickiest things about Signals, and even task.insert is wrong.

The actual correct way to go about storing connections is using a linked list, a linked list is just a bunch of little nodes with info that point to each other, more specifically to the next one in the list (when it doesnt have also a reference to the previous node, which my fastsignal does for performance reasons), the most recently connected nodes, so the most recently connections, will be the first on the list, while the oldest, is the last.

In lua that’s done with tables, you’ll have a member inside the signal object which points to the first node in the list, and on the node, you’ll have a reference to the next node, and also the connection function, etc.

If you don’t use a linked list, then essentially it doesn’t have parity to Roblox’s RBXScriptSignal, it can also cause some issues with race conditions. (If it’s using task.defer to fire, usually those aren’t an issue, just the order is gonna be off).

And then you just adjust and update these references as you connect/disconnect connections.

There’s a lot to making a good signal library, I hyperfocused on it last year and I figured a lot of little details that make the whole difference. Things you would think don’t make a difference but do, especially with Immediate mode because of those race conditions that are hard to explain.

If I was to recommend a Signal library at the moment, it would be FastSignal (duh it’s literally mine) (not to be confused with stravant’s fastsignal which is almost an example of what not to do), because GoodSignal hasn’t fixed a few issues that hardly have any effect on performance.

ill do a benchmark but running the functions 100k times. Lets see if flexsystem is truly a “best system out there” 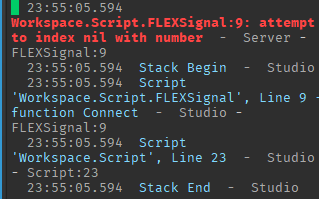