im trying to make it so if a player enters a passcode incorrectly they get shot. this is the script

location: inside local scritpt inside gui

error: not able to change players health through local script.

Changes to the health property of a Humanoid instance will not replicate to the server if done from the client, you’ll need to use a RemoteEvent to fire the server and then in some server script perform the health deduction.

this is not correct. the humanoid is inside the player character.

add ‘.LocalPlayer’ to that.
If you really wanna do it from the client, destroy the player’s head. That replicates to the server. if you want to kill the player via a local script do this:

Or do what Forummer said, which is a lot more practical.

Okay so basically you need to understand client vs server

The reason I see in my code why I wasn’t able to change the players health was because I was trying to say Player.Health which health is not a property of player. Instead what I should have done is say

Saying game.Players.LocalPlayer gets the player model inside of the players tab

But saying game.Players.LocalPlayer.Character gives me the players character which is located inside of workspace

The humanoid is a child of the players character inside of workspace so you have to reference Player.Character then you say
Player.Character.Humanoid.
Health is indeed a property of every humanoid 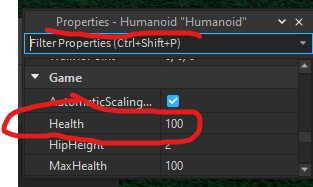 so you say for local scritps:

@Ma7adi805 Tell me if this helps. Sorry for being rude earlier, I thought you were someone who was responding to my post in terms of trying to help me, not get help.

that means the humanoid doesnt exist because the game hasnt loaded yet. Put a wait() or something