I want my game to be modular and scalable. So recently I’ve been learning how to make better code and frameworks (Knit) and using external tools like Visual Studio Code

In Knit there is 1 script and 1 local script for bootstrapper and everything else is modules.

What I need help is knowing how and when to use these different things.

How do I know if I should be making a Service? When I think of Service I think of something that handles a lot of things (e.g. DataStoreService handles all datastore stuff.) Let’s say I want to display the players name above their head, is that a Service? If not what is it a Module? It’s for sure not a Script or a Local Script because there are only 2 of those for bootstrapping. Should I be making Services like “DisplayNameAbovePlayersHeadService” ?

I’m also confused where actual game logic goes, as in you make all these fancy classes with methods, but then where do you call those methods? (I think the answer to this is in the KnitStart method of a Service/Controller and any other module which needs to access the public methods)

Does everything in one service go under one class in one file or can you have multiple classes and multiple files?

I know each developer can structure things at their discretion as long as it’s organized and efficient.

I’m looking for guidance/insight on how to do to make an efficient codebase architecture/usage of frameworks. (in this case Knit)

It really boils down to, what question or set of questions can I can ask myself to figure out what type of script is right for a specific task?

Correct. However, any script can tie into Knit if desired.

How do I know if I should be making a Service?

A service (or client controller) should serve a single purpose and be the single point of truth for that purpose. For instance, you might have a MoneyService which manages money, or a VehicleService which deals with vehicles in the game. These services might use modules to help them out, but are mostly self-contained.

Does everything in one service go under one class in one file or can you have multiple classes and multiple files?

One service/controller/class/etc. per file is good practice. Split things up into multiple ModuleScripts. You can put multiple in a file if you want, but I would discourage it. It’s much easier to navigate your codebase if things are split up IMO.

How do I know if I should be making a regular class or a Service/Controller?

This boils down to when you should use a singleton and when you should not. (Some people would argue you should never use singletons, but I obviously thing that’s a bit ridiculous). I find it useful to use services/controllers when I want them to be the single source of truth of a particular set of information, or when there’s no purpose in having a bunch of them. But at the end of the day, just do whatever works best for your game.

At the end of the day, Knit is designed to assist you in giving a bit of structure when you want it, and stay out of the way when you don’t want it. It gives you a lot of freedom to do whatever you want. This was a purposeful move away from AeroGameFramework’s strict structure, which pigeon-holes developers into patterns that might not really work in all scenarios.

Thank you, I’ve been watching all your videos trying to see how you do it. And writing/rewriting my code.

So just another example so that I know I have it clear. Tell me if I have right.

So in Jailbreak there are vehicles, the vehicles will spawn when a player is nearby. So they might have a VehicleController which listens for a player to be near a vehicle which then fires a “SpawnCar” function in VehicleService. VehicleService might use any number of Modules to spawn the car. Then the garage might be a component (or module) which talks to VehicleService.

A service (or client controller) should serve a single purpose and be the single point of truth for that purpose.

So that would be basically any game mechanic (you did say they are the backbone of the game.)

I’m still a little confused on how to tell what should be a singleton and what should not (like a class). 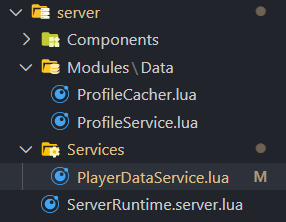 At the end of the day, Knit is designed to assist you in giving a bit of structure when you want it, and stay out of the way when you don’t want it. It gives you a lot of freedom to do whatever you want.

So basically I have to relax and stop overthinking it. I realize I’m overthinking things, I know some people just make a script and when it works they move on, but I’ve always been one to think “well am I doing efficiently?”, “I want my game to be scalable”, “should I rewrite it?”. I’m trying to be more open when structuring the game and structuring scripts and figure things out as I go.

Is there anything I ask myself or think to figure out what role a particular script will play (is it a singleton, is it a class, is it even a regular script, should it be part of the framework or should it be detached but still access services)

Anyway thank you for all the help, sorry this got long I got carried away