How i make a script for player become invisible when sit down?
Im making a model car 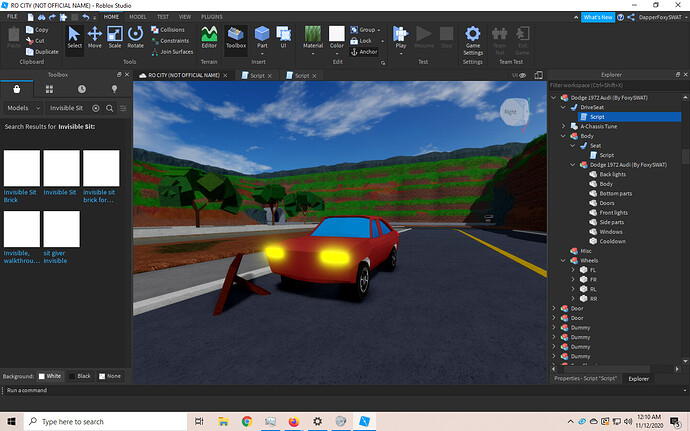 Have you tried this code on the DevHub? https://developer.roblox.com/en-us/recipes/Make-Players-Invisible

I already tried it and it didnt worked

You just gotta make a childadded and childremoved event on a seat then check if it is a weld get part1 of it (this will be humanoidrootpart) then make an for I, v in pairs loop from humanoidrootpart.parent:GetChildren() and the the transparency of v to 1

But the method from @imAlex_30 is better with occupant

Well, the resources have already been provided, so it’s a matter of utilising them.
Using the API reference, there’s a code snippet at the bottom that handles if a player is sitting in a seat or not.

Seats have a property called Occupant which is the humanoid sitting in the seat. I would use code provided in that article with a combination of a for loop, through a function. This is so you don’t have to repeat the for loop twice. The function is used in correlation to what you input into its arguments when you call it. When we are for-looping, we want to ignore the HumanoidRootPart, as it’s already transparent, using the ~= operator.

I’m not sure how setting the transparency will save space.

These script dont work for me, try it first, when i jump the player don’t are visible again

I tried the script on, it worked, but the face is still visible