How to create the "ps1 look" in roblox, using 3 methods

Hi everyone. I have seen many indie games (especially horror ones) use a ps1 aesthetic, but I haven’t seen many people use this style inside of Roblox. 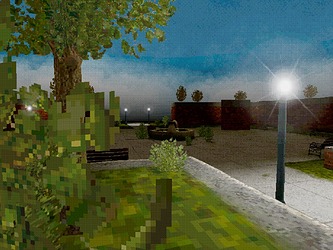 The reason it is difficult to create this look is due to Roblox’s engine limitations, with the shaders required for this look (eg. downsampling, affline mapping) not yet available to us. However, we can recreate this effect in certain ways on roblox. I have put together three methods that can achieve similar aesthetics to what other game engines can do.

This tutorial outlines the three methods for creating this look and also provides a game that you can look through as an example of how this can be used.

I hope you all found this tutorial helpful if you are looking to create this effect.

how well does method 3 work without warping? because the farther from the origin you get, the harder it is to control your character.

If you still want the pixelation effect, some warping is required. You’ll have to find a balance between warping and control that suits your game. If you don’t want any warping then I suggest method 1.

You could also make use of the optional effects I mention to imitate the look more without warping.

The glass doesnt seem to be doing anything? what properties does the glass need to have, and how far out should I be to see the difference?

The glass should have a transparency of 0.99 and in the example project I was >900k studs away from the origin. You can download your own copy of the project to look at the techniques I used.

i set the transparency and moved everything 900k studs away and the glass doesnt seem to be doing anything. though i did notice i could see my spawn forcefield (which i dont think you can normally see through glass)

Are you attaching the glass to the camera using the script in method 3?

yeah, and i know its attached because when i pause and zoom out i can see the glass move with my camera.

Can you send me a screenshot of the properties of the glass?

heres the majority of it 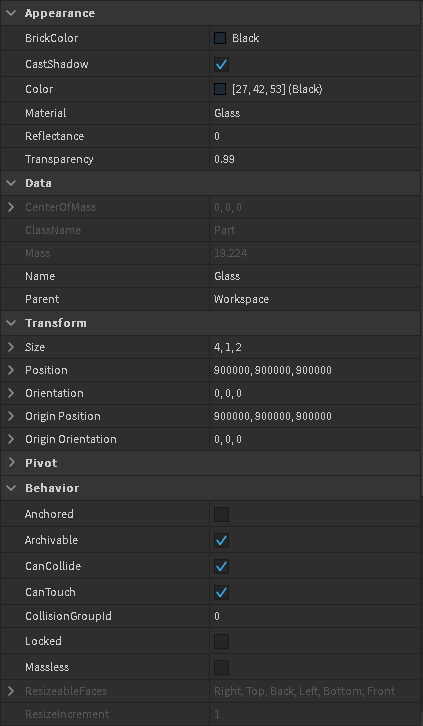 Try using these properties to see if it fixes your problem. 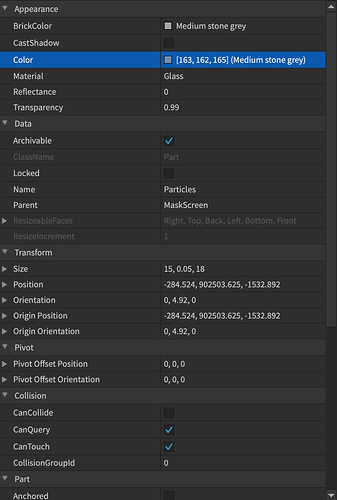 i can now see the glass on my screen, but still no distortion.

i also opened the “ps1” game in studio and the glass didnt seem to be doing anything there either. So im guessing its something to do with studio

it was, i had to raise my graphics level. which means that the glass method wont work unless the graphics level is higher (at least 8 in the roblox menu)

Yeah I forgot to mention that, i’ll add it now.

you should also mention that whenever you walk, the screen shakes like crazy

It kinda depends on your camera angle, so if you are facing perfectly straight forward there won’t be as much shaking.

One question, what shape is the glass supposed to be?

I just used a very thin block as the glass part.