How to Get Size From Surface

So say you have a part that’s flipped sideways, and the top facing normal corresponds to its Z face, but normal vector is ~(0,1,0), so it would get the (X,0,Z) size, but that’s corresponding to the part’s top face, and I want the size of its Z surface, which is (0,1,0).

So yeah it’s just an example and don’t give me some hacky solutions based only around this solution, I just want to know how to get the size of a surface of the part, no matter its orientation.

Try checking the parts CFrame.upVector and get the size based on that and the normal

Okay, you may be on to something here, but I want this to work with whatever surface based on a raycast using your mouse. So for example, if we the raycast normal is (1,0,0), but the part is rotated (0,0,90), then if you got the area using the part’s upvector and lookvector, you would get the area of the surface currently facing top, since the part is rotated (0,0,90).

Adding on, by area I meant like Vector2. I read this other post (the only one that asks about this other than me) but it gives a very inconcise answer and I’m not sure if their solution was right, because the OP never gave any follow up which is just straight up lame

How will we discover the up and right vectors relative to the surface normal? That’s the only information we have, so what if the part looks like this? 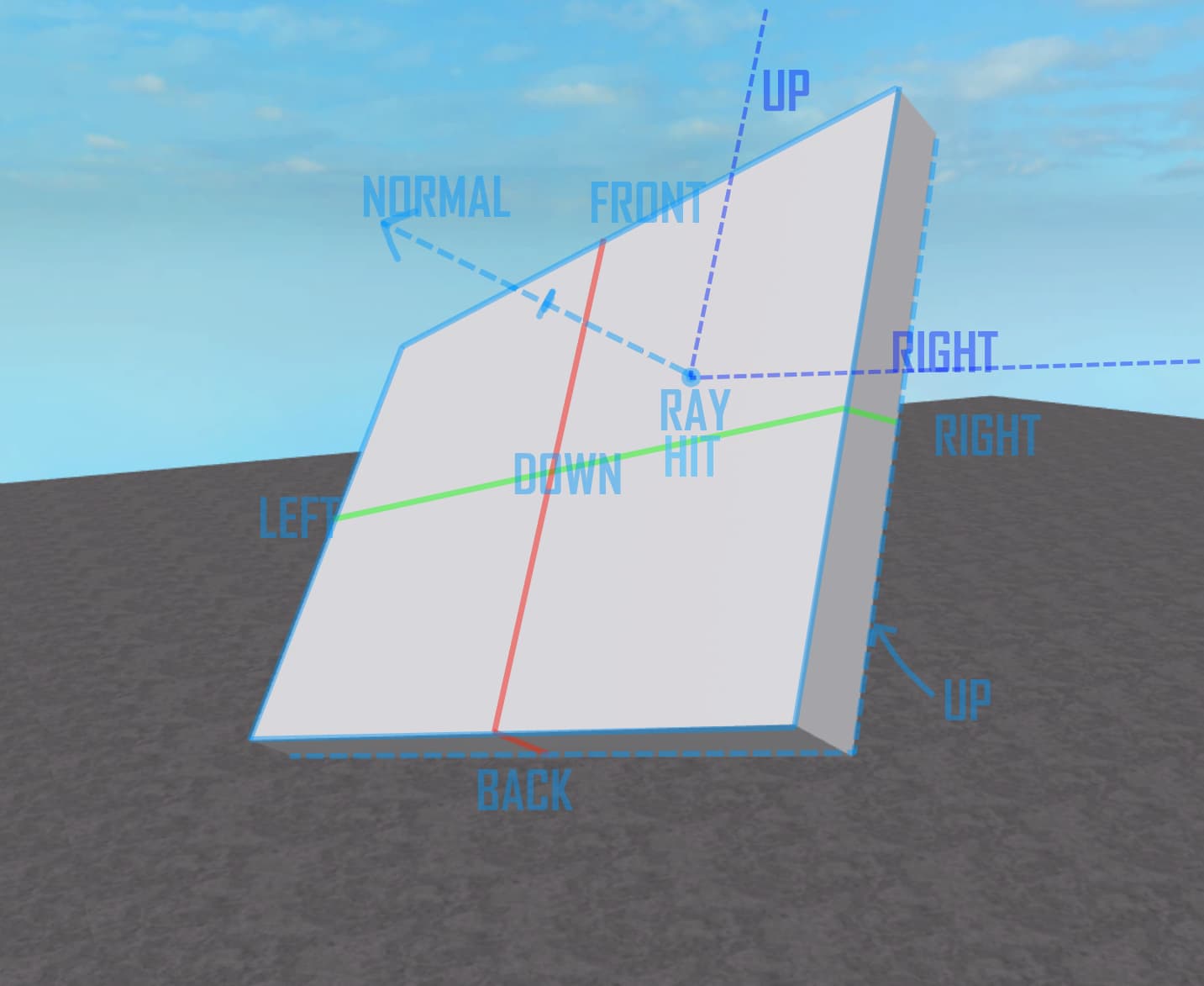 Without up and right vectors and only the look vector, it’s impossible to determine the size of the area. I need someone with incredibly advanced knowledge of CFrames, Vectors, Geometry, and Roblox… hint hint… Egomoose

I just found this post from a little bit ago that seems very simular to what you are asking, perhaps you should look some more because googling “roblox how to get area from surface” came up with many results.

And yes I did google that term along with several other variations and the post you linked is the only post mentioning this, all the other posts on google are irrelevant. If I’m asking this question on devforum that usually means I’ve already googled things.

I just read through again and still don’t see it mentioned anywhere here, I recall you saying there is no posts about this so… idk anything about this topic but you were saying you had no luck so I thought I’d search around

I read this other post (the only one that asks about this other than me) but it gives a very inconcise answer and I’m not sure if their solution was right, because the OP never gave any follow up which is just straight up lame

@DaRealDevGaming
I’m in high school. You think I wouldn’t know how to calculate the area of a square? I’m trying to find the area of any surface of any part no matter its rotation or size or position.
Take a moment to read what little I have wrote in this thread and maybe you can get a better idea of what I want to achieve.

@SatrapRezaPahlavi
Anyways I have a theory
Given that a part’s CFrame has an UpVector, LookVector and RightVector, you can compare the angle between those vectors and the normal vector of a raycast (ray.Normal)

Oh nevermind about that CFrame theory, I found this on another DevForum post. lol

So first work done. Now we map up the formula to calculate area for each side.

So to get the final area

I’ve been reading this thread for the past hour, sorry that I skimmed over you claiming someone just dropped a post randomly when they marked their solution as the answer, which is what you are supposed to do? Maybe you really should touch some grass

There has to be a more elegant solution than just this. I already have the function to find which Enum the face of the normal is.

Okay, good luck
If I were you I’d stick with what works but then again, I’m not the one facing the problem…

Tell me. Can you read this code?
I sure can’t