When using HttpService:RequestAsync to send a POST request ( with a large JSON blob ), HttpService will take some time before it will error with “HttpError: Unknown” or “HttpError: Timedout”

I have observed this only happens when the POST Body has a large JSON blob. Other Http requests are able to go through normally.

I have attached a repro:

If you observe that all Http requests are successful in the server console, leave the server and try again. This is not 100% reproduce as it doesn’t happen in all servers. In my experience it happens 7 out of 10 times and it affects most servers in my game. This does not happen in Studio.

( This repro connects to the pastebin APIs provided by the HttpService documentation example. The repro does not include an API key ( by design ), as HttpService should return a Http 401 or 422 code response from the server )

HttpService should take a large JSON blob and submit the data to the web server. When I attempt to connect this repro to a URL host I control, the web server on my end does not receive the request and is not timing out. The request is timing out in Roblox’s engine before it even reaches the outside network.

HttpService returns an error ( which has to be caught with a pcall ), “HttpError: Unknown” and sometimes “HttpError: Timeout” 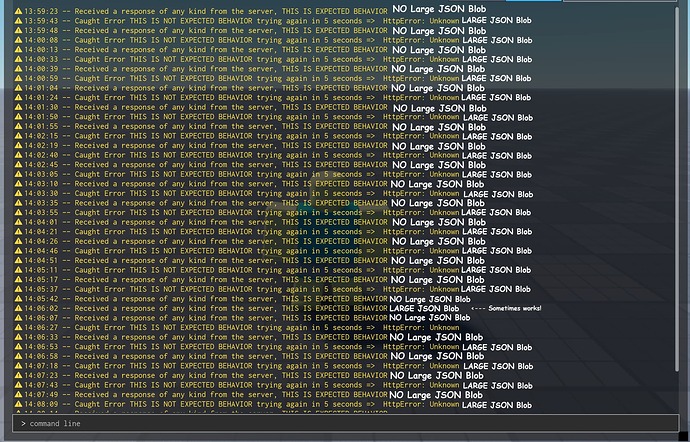 In this screenshot from the Repro, my script toggles between sending a large json blob or a normal json blob, and you can see how the request goes through each time I don’t send a large JSON blob.

It is not 100%, as after a few minutes of trying, the request does finally go through ( seemingly randomly ), but will continue to error after the next attempt.

This issue is actively impacting my game as I extensively use HttpService for many key-parts of the gameplay, many of which require sending a LARGE JSON blob.

I should mention that this bug started occurring maybe in the last month, my web requests with large JSON body were working fine until recently. I’m hoping this is something that can be reverted with a flag flip.

@alexnewtron - going to send you a PM

Any update on this?

I’m still getting reports of this happening in my game as well.

we’ve fixed some issues internally and I worked with Alex on confirming that it was fixed. are you still seeing problems?

I haven’t had any issues with this after my post, everything looks to be good now. Thank you!