Is my game title "Work at MacDondald Symble" going to get copyrighted?

Hello guys! I’m a beginner developer making the fast-food restaurant parody game and housing game similar to Work at a Pizza Place which is named “Work at macdondald symble” because this name was from a Roblox auto rap battles meme and my goal is to make cooking in a fast-food restaurant more interactive using mobile phone touchscreen or mouse.

Basically, during development, I’m concerned whether the macdondald symble name is copyrighted or not because I intentionally misspelled the McDonald’s brand name to make it look like a Roblox auto rap battles meme.

I wanna ask you guys a question: Will my game still be copyrighted because I spell macdondald symble, not McDonald’s in the title of the game?

As long as you are not infringing on the McDonalds brand, such as using anything Mcdonald’s related. After I did some research for you I think you will be alright, but I suggest just creating your own brand to be safe.

Nevermind it is not trademarked.

The McDonalds corporation, is without a doubt; Trademarked, Copyrighted. They are most likely one of the most locked down companies in terms of branding.

But they do not own MacDonald they own McDonald.

It’s a very risky slope, you need to understand the legal reasonings behind it.

That is why I said to use Mecdonalds before my edit.

Still would be smarter to create your own brand that doesn’t go near other copyrighted material.

Hopefully it would get people’s attention such as using a trademarked name.

Then getting DMCA stiked by ROBLOX, loosing almost all chances of ever DeveloperExchanging in the future due to your account having to be moderated. All I’m saying is that it is a lot easy and time saving to use your own brand.

I am saying hopefully the brand name that is not trademarked gets enough attention like a game with a trademarked name.

Just be careful. It’s awfully close to “McDonald’s,” and some companies are funny about names. I believe Microsoft had to change SkyDrive to OneDrive because Sky didn’t want anyone to confuse it with their own file storage.

So is macdondald symble safe? cuz i put symble in the macdondald name and its longer than the McDonald’s name because this was originally from a roblox meme like this: 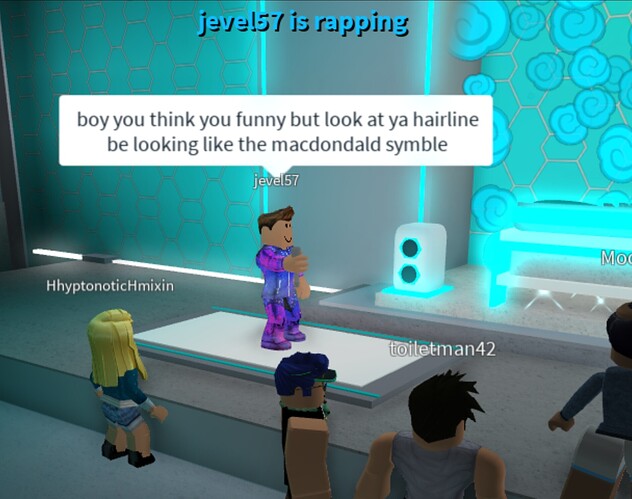 Then getting DMCA stiked by ROBLOX, loosing almost all chances of ever DeveloperExchanging in the future due to your account having to be moderated. All I’m saying is that it is a lot easy and time saving to use your own brand.

I’m not sure cuz like Shinobi Life gets DMCA striked and has to change their name but they didn’t get banned from Developer Exchange?

It’s not copyrighted, but I can’t tell you it’s safe to use because I can’t guarantee it. If you do decide to use it, that’ll be your choice. As I said, just be careful.

So I suggest you change the name to Blox Donald