Since \0 is allowed in patterns, will utf8.charpattern be changed to use \0 instead of %z ?

Treats using %1 with no captures as invalid, when it’s valid.

I believe the fact that %1 with no captures is valid is an accidental result of how the implementation works, not the specified behavior. %0 should be used instead.

Doesn’t check if integral size is within [1,16]

More or less intentional to simplify the implementation, although might be worth checking.

I believe the fact that %1 with no captures is valid is an accidental result of how the implementation works, not the specified behavior. %0 should be used instead.

The 5.2 reference manual added this text to the description of string.gsub

In any case, if the pattern specifies no captures, then it behaves as if the whole pattern was inside a capture.

So it doesn’t seem like %1 working with no captures is an accident, considering the description was updated to include this case.

Edit: generics should be invariant

In the generics example, this is where type assertions would definitely be useful, cause I can see a case where you get a function that returns a (newly constructed, rather than mutated) Array<BasePart>, and you want to generalize that to an Array<Instance>

Of course type assertions can go wrong if you lie to the type checker, but I think it’s better to have that be up to the user. On the other hand, as it works currently, things can definitely go wrong without type assertions since it lets you mutate x in that example in an invalid way.

Edit: that very last example is both not valid, nor should it be valid, since if you read an element from z, it’s not actually guaranteed to be a SpawnLocation

I have a few questions about this.

I think it should be possible to strong-type class properties like this.

As a Roblox developer, it is currently too hard to use object oriented programming without having to worry about low level stuff (especially with Luau type checking) and make my code look clean. I know, true OOP isn’t coming to Lua or Roblox anytime soon but good feature would be syntactical sugar for classes which would use metatables under the hood. Why? Read this post which explains all of the nightmares you’ll get when you try to use OOP with Luau type checking such as painful types like…

could be a good solution for that I think. Would also reduce a lot of boilerplate code developers have to write for OOP.

Right now this is limited to Roblox userdata types.

Will this ever be available to the public?

I still believe it should be an error, not up to the user, and Roblox should introduce something akin to typescripts “v as X” that way you can only write potentially unsound code explicitly which will make it harder for the user to write unsafe code.

I think that for me these luau updates have been the hype of the century. If anyone told me we we’d be able to do parralel processing in Roblox 3 years ago I’d not believe you in the slightest let alone most of the new stuff luau is adding already.

I have the feeling anyone who has seen me post on the topic of luau has probably noticed I have an unnatural obsession with squeezing every little nanosecond out of some of my Roblox code and every time I see lauu performance improvements mentioned I immediately get very excited.

(I’m too lazy to properly quote these right now because Android, and I’m probably missing some critical information on how discourse quoting works so uh)

This sounds like it would’ve been a huge disaster if I’m understanding correctly so it’s great that this isn’t a thing.

This is a piece of info I’m super interested on! Which pieces of info will Roblox’s form of debug.getinfo support?

Things I am now considering being relatively feasible (and even performant!):

If anyone wants to look into porting CloneTrooper’s rbxm implementation I’d be super interested! (rbxm in Lua has been one of my all time favorite ideas)

Lastly, (because I’m not sure most people are even still reading at the pretty pointless sheer size of this post) things that I am most definitely legally obliged to mention because I’ve only recently noticed that almost all of my luau posts contain something about my damn compression algorithm:

This sounds like it would’ve been a huge disaster if I’m understanding correctly so it’s great that this isn’t a thing.

This is a piece of info I’m super interested on! Which pieces of info will Roblox’s form of debug.getinfo support?

Still figuring that out. On one hand we could expose everything that Lua 5.x does. On another hand, maybe exposing a function object from the stack frame isn’t a great idea since then you can call it. On the third hand, setfenv() already allows you to mess with your callers so maybe it’s fine.

Our current implementation supports “source” (script path), “what” (C/Lua), “currentline”, “nupvals” (from Lua 5.x, not useful in absence of other debug methods that we don’t want to provide for sandboxing reasons so might go away), “nparams” (number of fixed arguments to the function), “isvararg” (is function variadic), “name” (function name), “namewhat” (historical artifact from Lua 5.x, will be removed), “func” (function object).

This would only take a port of lz4, and a port of an existing implementation (@CloneTrooper319 wrote a very nice one in C# and I think this wouldn’t be hugely difficult to port now!). 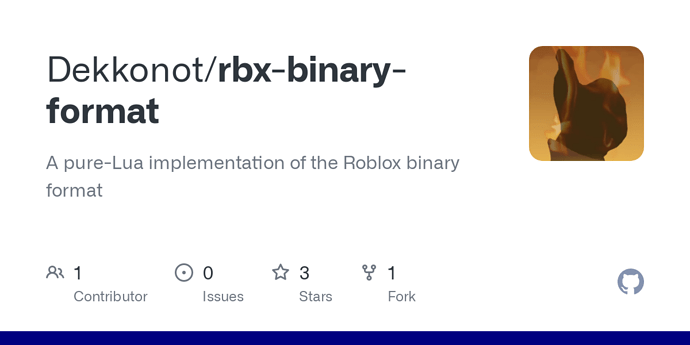 I haven’t benchmarked it any and the implementation isn’t complete, but it exists. Should run in Luau just fine with some modifications – namely, because it’s meant for vanilla Lua it uses a module to fake all of the Roblox data types, so you would want to remove that bit and make it just use the real ones.

You’d also have to swap out the require statements but that’s easy.

Invalid escape sequences aren’t treated as an error in Luau (they silently represent themselves instead). Is this intentional?

So what actually happened to __meta, it kinda flew over my head when it was removed.

Other than that, good to hear that type-checking was fixed, having Players getting merged into Player was getting a bit confusing.

I can see a case where you get a function that returns a (newly constructed, rather than mutated) Array, and you want to generalize that to an Array

There’s a reason you should not be able to do that, because it can create invalid code:

I know you specify “newly constructed”, but there’s not really any consistent way to handle things like that.

Why would foo be able to return storage in the first place? Isn’t storage implicitly of type Array<any> there? Maybe I’m confusing Luau rules with TypeScript, but you would see an error on line 3 in TS (and a warning on line 1).

Edit: Actually I still see your point – if you had said storage: Array<BasePart>, then the code is invalid like you say.

Java has a different solution to that problem (though a similar solution would not work in an untyped language like Lua, even with type annotations), see discussion on ArrayStoreException for an interesting read: https://stackoverflow.com/questions/12369957/dealing-with-an-arraystoreexception

I have a couple questions.

For 2 at least, FindFirstChild has no guaruntee that the object returned is a Folder type. It could be a Part called “Folder”.

I considered this, but how can I guarantee it then?

Maybe FindFirstChildOfClass/WhichIsA or manually check the class and type cast it?