wheres the post about a new regular system? (edit your message)

Additionally, this change would cause unnecessary conflict and disappointment from people who create meaningful discussions in that category because, arguably, they should not be penalised for the mistakes of newer users.

Why don’t we just penalize the newer users that keep making mistakes? I agree with @TheSenorDuck with

You’re highly underestimating how many people use devforum and how many will learn from others mistakes. I highly doubt if someone strolled onto the devforum just to ask a question for themselves on dev discussion that they would take time to even look at anyone else’s posts and see quality, people will just come and post and wait for an answer and leave, with what you have put this does not stop the root cause of newer people joining and posting lower quality topics, new people join the devforum every single day and this will still keep the same problem. What the OP said is the best option.

The tutorial is already fine. Plenty of new users are just too lazy because it doesn’t yell in your face what the rules are. Ugh, who would want to read that WHOLE post!? Thus unless there is some mandatory slideshow or animation to watch, bad posts will be bad posts.

If you want to show them some mercy then give them a warning, or don’t let them create topics for the first week of them being an official member. This way they are forced to see the quality of posts but can still participate in discussions via replies. After that week, you get a warning for the first bad post, one week ban from creating new posts on the second violation, and if you commit another violation less than 3 months after the last one you can’t create a topic for a month. If the situation is truly bad enough, the moderators can manually ban you themselves to their own judgement.

That’s actually really nice. If only it got any staff attention.

I don’t see TheSenorDuck’s suggestion as much of a solution to these issues. Due to the seemingly ineffective tutorials and introductory processes new users undertake, inappropriate behaviour (whether this be off-topic or spam) is corrected mostly through feedback. Completely blacklisting somebody from a category after what could be just 2 minor infractions (and 1 piece of feedback) seems excessively harsh and terrible for UX.

People who break the rules are almost always penalised / contacted by staff once flagged anyway. Arguably, the issues lie with the fact that repeat offenders can continuously break the rules and receive minimal punishment, adding stress on the moderation system and degrading the forum experience. I believe instead of treating everybody equally under a much harsher moderation system, the system should adapt in order to better recognise the intentions of off-topic / spam posts, where harsher punishments can be given out when rules are deliberately broken for whatever reason. I think completely closing the category to TL1 should only be used as a last resort, or if Roblox truly have no better solutions.

Moreover, having a different moderation process dedicated to DD would also be very confusing. Any changes like this should be made across the whole forum rather than in specific categories for consistency.

I think what they’ll do is maybe prevent Members from creating topics entirely.

But they’re never going to completely block off the entire category to anyone with the Member rank, otherwise it would’ve been done months ago.

Plus, doing something like that kinda ruins the whole point of them making DevForum more public.

From what I can tell, the DevForum staff likely want lesser-experienced developers to have more access to the forum so they can learn skills more efficiently.

We’re the ones who make the games, the whole platform survives because of developers like us, so who can blame them for trying to encourage newer developers to keep going instead of giving up?

Judging from the fact that they havent made any changes to the forum at all the last 6 months, I think they’re still trying to think of a way where Members can still have equal access to the forum while also limiting the amount of off-topic posts on the forum.

So no, fully locking off categories to Regular+ isn’t something they’re interested in.

I think improving the tutorial is something that can happen, it wouldn’t be a perfect solution but it can help with the problem however.

I also agree that SenorDuck was a little harsh, I revamped it in my last reply, this allows for experience to be gained before you post, along with a warning:

don’t let them create topics for the first week of them being an official member. This way they are forced to see the quality of posts but can still participate in discussions via replies. After that week, you get a warning for the first bad post, one week ban from creating new posts on the second violation, and if you commit another violation less than 3 months after the last one you can’t create a topic for a month. If the situation is truly bad enough, the moderators can manually ban you themselves to their own judgement.

This would solve the stress issue you mentioned and I don’t see why it shouldn’t be put across the entire system. This also gives room for people who make honest mistakes, as you would have to repeatedly break the rules in the 3 month time frame to have severe actions taken against you.

Outright ban from the subforum or DD specifically is on a case by case basis as that’s extreme.

That reason made my day too.

After a bunch of users created an Among Us game in #development-discussion, I now really want the category to be Regular+ to make topics in. This category is no longer being used for professional development discussions, and is instead filled with off-topic replies and topics.

The category literally gets worse every day with the same garbage such as Metaverse Champions, voice chat, display names, “How can I learn how to script”, and more.

As somebody active on the devforums (but not have been ranked to Regular yet) I agree with this idea. Development Discussion these days is really filled up with stuff like “Why do you develop” or just some general off-topic conversations. I get why people would take it this way, but it really clogs up the front page.

I’m not sure about Regulars+ since there are decent members that dont do like “oMg!! cHeCk OuT my DonAtIon GaMe uNtiL I reacH 10K” and it’s just a race to donate to people who have spent a second on the forum… I’ve seen worse even though I am a member myself, spam posts, spoonfeed posts which ask for scripts and advertisement etc.

I agree, the current one just gets boring with a little amount of commands… They should have a tutorial when to flag posts cause I got flagged for making a joke. 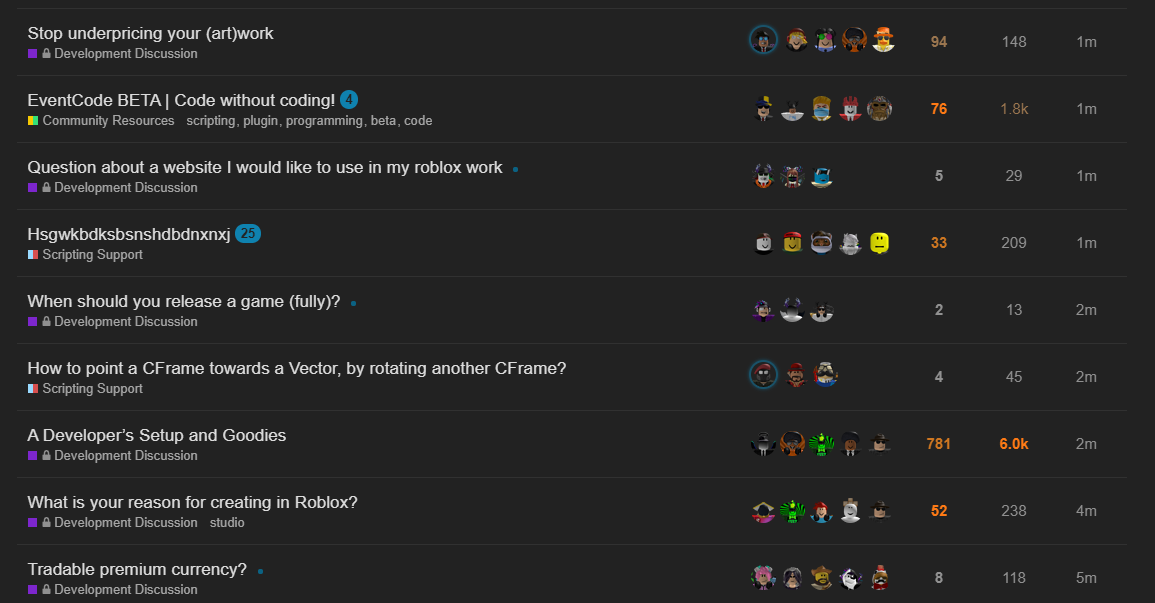 Can’t really open the forum without being canoned with tons of #development-discussion posts.

None of those are against the rules, though, no? Maybe the “website I would like to use” one, but I don’t see the problem with most of those topics existing. Simply having a lot of threads shouldn’t be an issue if the majority are acceptable quality.

Edit: Yeah, only one of those has since been locked, and it was because the replies got out of hand. One has been around since January, so that one clearly is popular and a non-issue to DET.

It’s important to see the difference between an active forum with lots of people productively communicating and an issue that needs to be cracked down on. This may be more reflective of an elitist mentality common in the #forum-feedback part of the forum than an issue in #development-discussion; people seem to think “hey, Members are making topics!” alone is an “issue” even if the topics themselves break literally no rules.

The “What is your setup” posts are so numerous and active it clouds out a lot of good posts. And with the “Should we be allowed to develop on x” ones.

I understand your concenrs, and the fact that most topics are good-high effort. However, Roblox should take some actions to throttle this. I wouldn’t go as far as enabling post approval in #development-discussion but limiting the number of posts a user can create in #development-discussion per day or applying zero tolerance in off-topic posts would be much appreciated.

That one is from January and could very well be the original. Not sure why a current trend should mean an old topic has to be removed. You should know; you posted on it.

However, Roblox should take some actions to throttle this.

Throttle what?? The posts are rule-abiding.

The fact that the DevForum is flooded with posts that can be just resolved by DMing a member of the DET is really annoying.

Even a seperate topic called #general-support with questions made by Members and visible to Regulars+ would solve that as they have more experience with Roblox.

Not at all what I’m saying. I’m saying people shouldn’t hop on, see a topic, and create a new one.