Making a combat game with ranged weapons? FastCast may be the module for you!

It’s a bug with the Luau type checker. I can go in and remove the strict type annotation.

Edit: This change is complete and the live model no longer uses --!strict annotations.

Thanks, that helped a ton.

Now on another note, I’m sure this has been asked before but the replies are pretty all over the place…
What would be the best way to improve the “lag behind” effect when moving and firing?

As in, say, you’re strafing and fire your projectile - the projectile will appear to spawn beside you due to replication slowness

I am aware that I can manually spawn the projectile client-sided, but since it’s using FastCast I’m not sure how simple that would be. Would I need a separate Caster in a local script? Could I use the original cast and just hook up a duplicate local projectile to it? Sounds possible but also like a fairly large hassle.

Ideally, I’d wish something that’s sole purpose is being a fast and simple way to generate low-lag projectiles on a whim would also have settings in place to automatically compensate for things like that, to truly become the ultimate drop-in projectile system, without having to manually go in and code extra lag/delay compensation. Though, I know nothing is perfect, and development definitely takes a lot of time for something this complex. Either way, I’m struggling to quickly think up a way to make this otherwise solid projectile module work within the context of a fast-paced shooter type game and could use some guidance.

This is pretty awesome!

Does this handle player damage by itself? Is there a damage parameter?

It only handles the projectile arc/movement by itself - There are events for when you hit something and even when you pierce something, allowing for very easy additions like that.

When i do the cast userdata on the sending part it works but reciveing does not work:

i want the player to be sent to my damage module

@EtiTheSpirit firstly, huge thank you for this community contribution! I am beginning integration in my project, which has some perhaps special parameters that allowed me to uncover what I think may be a small issue.

In my application I travel at high speeds and need a very long and wide laser beam for adequate visualization. The low BULLET_SPEED allows us to clearly see this particular issue.

Now, let’s start the simulation and turn the camera to the side so that we can see a profile of the beam’s trajectory. We should notice that the beam appears to originate behind the character.

With some fiddling, I tracked this down to a double-negative on line 246 of StarterPack\DebugGun\Server

After this small change, I now have the correct appearance of a very long beam that originates from the gun’s muzzle instead of behind the character’s shoulder.

Thanks again, and I offer you a deep bow of respect, as an Apprentice to a Sensei, and as one who has studied your keystrokes. This module is a valuable contribution to our community, and I’m happy that I can do my part to help.

It’s me again lol. This time, I’m here with a possible enhancement for the Laser pistol to improve accuracy when fired while travelling at high speed.

Let’s start with a video from my upcoming game, WormHole Rider 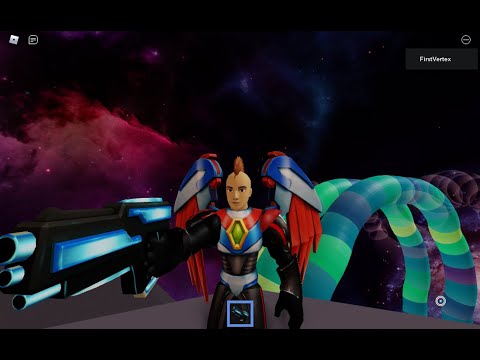 As you can see, I need to travel at very high speeds, this is just a Class 2 Training Worm, even higher speeds are still in development and present special challenges. Speed portrayed in the HUD is mathematically accurate, based upon figures obtained here

Anyway, as you might imagine, when the character is travelling at such high velocity, we must take care to fire the projectile from the correct location, which can be substantially different between the client and the server.

Our Sensei @EtiTheSpirit has left us a breadcrumb to start us down the journey. On line 192 of Server script we find the comment:

To do: It may be better to get this value on the clientside since the server will see this value differently due to ping and such.

Indeed. Let us proceed to do precisely that. It turns out to be fairly straightforward. Tracing the code we see that a MouseEvent is fired from client to server with a payload of the mouse’s Hit. Let’s enhance this payload with a bit more information. On the sending side, in the script file Client we’ll change the RunService stepped handler to include a packet of data instead of just the Mouse.Hit.p. Here’s the necessary data points from my WormHole copy:

Now let’s modify the receiving side in Server script as follows:

When receiving the event on line 261, let’s remove line 267 which computes a direction, since that is provided by the packet. And, instead of passing this computed direction to Fire() we pass the whole packet.

Now, let’s update Fire() to utilize the packet of information from the client. First, we’ll slightly modify the directionalCF initialization based on the packet’s CFrame’s LookVector:

Let’s remove the sketch that our Sensei left for us on lines 191-193 and we will compute a modifiedBulletSpeed using the packet’s velocity as follows:

The velocity we received from the client was accurate at the time the weapon was fired. Now, let’s predict where the client has moved to, during the time that has elapsed since the packet was transmitted. To do that, we’ll need to diff the server’s tick with the one from the packet, and we’ll actually need to double it, since approximately this amount of time will again elapse on the return trip when server sync’s the projectile’s position back to client. Here’s my computation for the interpolated position using this doubled ping difference:

And now we feed these inputs to the Caster:Fire as follows

With this, we predict where the gun’s muzzle has moved to, based upon it’s last known position and velocity, and the time difference between when it was fired and now.

I am working on a gun system that uses fast cast (along with the PartCache module ) on the client as a substitute to simulating bullet velocity by other means. Is there a way to cancel a currentcast, as all my tools run on a single LocalScript in StarterPlayerScripts, and I need to end whatever the current cast is when they unequip the tool or if they unequip the tool while shooting.
Some of the problems I have come across include :ReturnPart not working properly as I set the current cast to nil when the tool is added back to the backpack, and multiple different casts stacking up on the same tool when it is reequipped.
I could maybe store the Tool’s data and whether it has an active cast in a table or metatable, and then use the cast found in there, but I would like to know if there is an alternative that I don’t know about.
Never mind, found a solution. Used similar methods to this:

This is my first tutorial here! Point out any errors in the code, please. I might have missed something. 0. Quick info 0.1 I have made many past attempts at making pew pew guns on roblox in the past, and i thought i’d share some of the “basic” process for beginners here. Keep in mind none of this needs to be the way it is here, feel free to use your own methods. 0.2 This article covers the very basics on setting up a working gun, making it aim (and how to make it easy to add other thin…

Testing, I tried your method, and it worked well in studio, but when testing in server, you couldn’t move and shoot or no bullets would come out.

@IISato you could try adding a print(pingOffset) on the line right after it’s computed, to see what the actual value was. I’m wondering if a timezone or other timing difference could cause your ping to become unexpectedly large or small.

Has anyone used this module for large and slower moving projectiles? Think: Fireball.

I am currently tweening and and using .Touched on this “fireball” and getting a fair amount of desync between the server-sided hitbox and the client-sided visual effects of the fireball.

I have been lookign at FastCast for a while now, but I am not sure from lookig at the documentation if this:

The manner in which you handle hit detection and visual display is on you, FC only provides the means of firing and detecting on a given side.

I take it this means this module is not ideal for my use case.

OK! I am back with another question, I have scanned the thread and I am not sure yet if this module is good for a simple grenade. All it needs is to arc through the air and have a little bounce, depending on the settings, does FastCast handle this?

Thank you so much for the module! Truly an amazing resource!

Although, I noticed that the pierce demo is more on a ricochet demo. The bullet doesn’t exactly pierce, it just ricochets. Really sorry if I seem stupid for not knowing why this is.

PS. I noticed a module breaking error inside of the contained part cache module. 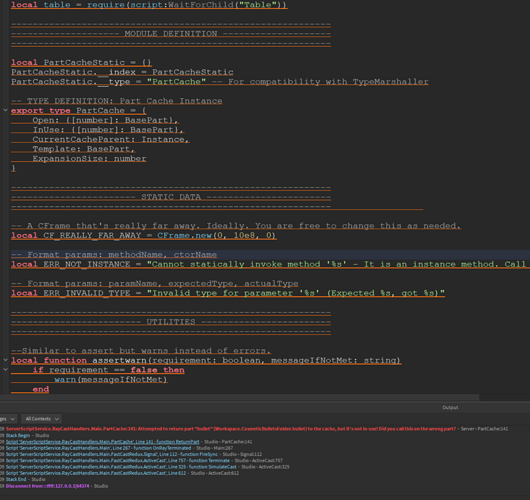 “Free Types leaked into this modules public interface. This is an internal Luau error. Please report it.”

Hello, for anyone that wants to implement bullet weight well then I made this little thing.

You can edit the weight, speed, and gravity if you wish to adjust it.

Hey, need some help. When you shoot close to a wall the bullet doesn’t form (since the trajectory is too short). But, is there any way to actually have the visual bullet with trajectories this short?

By the way, the likes

I can’t for the life of me figure out how to get the total distance that the active cast has travelled upon hitting a target? What am I missing here? Where do I obtain information like this

trying to do damage calculations but ain’t getting it. I see there’s a DistanceCovered thing in “Cast State Info” but… I have no idea how to access that

Edit: Ohh also this is unusual, I have not updated my game in a while but come back to see that FastCast’s cosmetic bullets have somehow entirely broken. Seems where as before I was using a front-facing part with a graphical part parented to and welded to the “base” part, but now the weld is being ignored so the graphical part of the projectile is not getting positioned alongside the cframed base part.

I wonder what caused this. Maybe roblox broke constraint welds and cframes?

Been trying to implement some sanity checks but not sure how to go about it. Any thoughts? I was going to record player positions from the past and then do an “instant cast” on the server (so basically just a normal cast without all the delay) and then check if in theory, it could’ve hit a character.

Problem is, I can’t read this new type lua code and so it’s very difficult to modify the code. Are there any other simpler effective sanity checks?