My first game! Looking for feedback. What can I improve?

I have finished an early alpha of my first game Link Here. I’m planning on using this game as a starting point/launchpad for future projects. It took about 2 months to get to this point, learning from scratch to use blender, photoshop, and using the new filtering enabled features.

It’s a remaster of Tadcool’s Boys vs Girls Island Wars, which is the first Roblox game that I played. My goal is to keep the classic feel of the original game while using new and original scripts/models.

Everything from the guns, vehicle, map, UI, FBX are scripted/modeled by me (apart from a couple of libraries such as Fastcast and Datastore2).
Here’s a showcase of some of the guns that I have in the game (There are about 20+ in total). 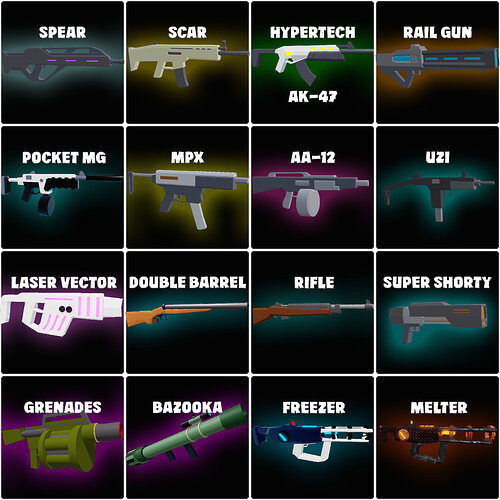 this is very well done it is beautiful

That’s a good point! I plan on adding third-person eventually, but at the guns only work in first person. Everything else works in third person.

its so you cant shoot behind you

Hello! As I seen your game for the first I would say the game is okay, But the things that I need to critise:

I would suggest to do:

And thats it I think game just need more work and it can be good game, I should give it like 6/10

Thanks a lot for this feedback! I like a lot of the ideas that you have given, especially adding more audio and a better UI system for kills. Perhaps background music would be helpful? I’m gonna get to working on adding endpoints into the notification system soon. Reload animations are planned as well. As for the map, I’m just not good enough to make a modern-looking map. I built everything on the map in roblox studio so it is not of the best quality. I might need some more time to come up with better islands on blender.

Nice game! I can see you have put a good amount of effort in so I have taken the time to find bugs for you.

Wow, thanks a lot for this response! I really appreciate the time that you took to go through all the glitches and suggestions. I’m gonna fix those UI bugs right now, as well as the self-damge coin glitch. Those are game breaking!
I’m also gonna work on the flag suggestion because a lot of people that I’ve asked to test my game also think that it currently does not serve too much of a purpose. The waterfall island is supposed to have a gun spawn in it, but I forgot to add it so thanks for the reminder.
I made it so that the bikes automatically despawn after about 45 seconds (as a way to ensure that unused bikes do not lag the game). I will make this timer longer.