And this is why spamming is bad:
I just clicked on the time stamp every second and the model flew like a bird 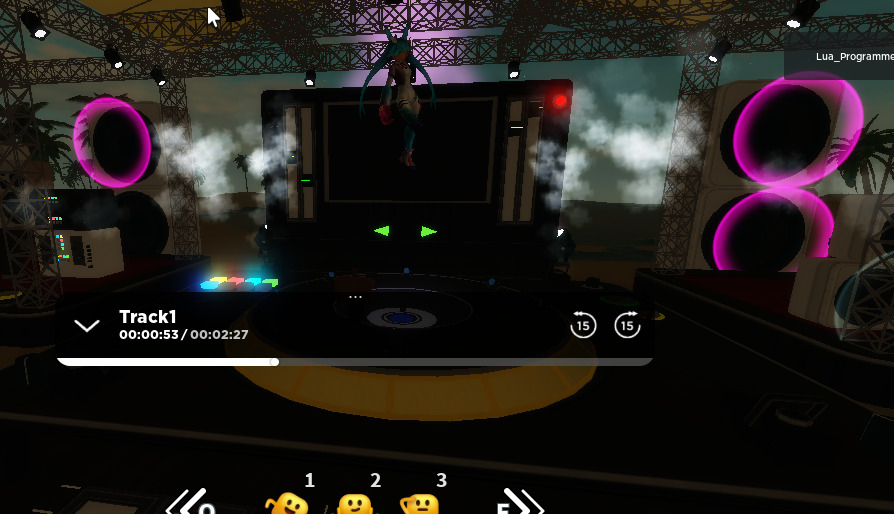 THIS IS ACTUALLY INSANE, BEST UPDATE ROBLOX HAS MADE IN A WHILE

I mean cmon you basically open sourced every concert you have done in a very advanced framework very cool, also smart tactic to do this during the ban crisis just need the word to get out there ya know let KreekCraft and the others know I bet some developer will be taking advantage of this in the future even me.

I enjoyed the concert template,and it´s good,Although the concert itself is like two things,A rthro robot woman dancing and a sky world.

I hope this will be good!

I mean cmon you basically open sourced every concert you have done in a very advanced framework very cool, also smart tactic to do this during the ban crisis just need the word to get out there ya know let KreekCraft and the others know I bet some developer will be taking advantage of this in the future even me.

What is a ban crisis?

The ban crisis is basically the thing going on in Roblox games where “hackers” are spoofing the Roblox chat which surprisingly isn’t too hard to do and has been talked about all the way back in 2016 about being a potential problem, then some bot in the servers will mass report them and they get automod banned because they said some very very questionable things. Now for this template although its Rthro and all I just like the complexity and effort put in. Probably first time for me Roblox has actually put a good chunk of effort in for the community.

Would this be possible in a non live event setting on a individual server forvan individualplayer? This sounds like something that would very helpful to my game idea. Below isn’t off topic necessarily, its just to give an understanding to my question.

Essentially its a single player story based adventure game, I want cut scenes and or parts of the environment to do things. Or npcs doing stuff.

In the game you are an archeologist and you have a partner that sometimes comes with you on tasks etc, but im thinking they will mainly hang around camp.
I want certain things to triger different animations like say you come back from the first task I have in mind when you get to the area you will be working, they get you to go collect wood, then goes to get gear and start setting up base camp. Then when you come back it plays a cut scene and the npc starts a fire.

That’s a general idea, would this new event sequencer allow this, it says time line. If it would make stuff like this possible or more easier then that would be awesome.
If not and its just for live events then i guess that’s fine.

I just want to comment on the style in the clip used. No part of roblox soul is left.
It looks like second life, and there’s a reason why second life never succeeded.

I really needed something like this for a long time, especially around the Ro-EDM Community.
For a Lighting and Stage Developer like me, this is extremely helpful.

The code is… well… interesting. I would like to ask about the Concert place.

If I were to make a concert, I would honestly just use my own code. The code in here is confusing and I think it would be worth more to make my own rather than just read the documentation which is the size of a college essay.

Why are there modules that point to already existing modules? Is it because of how your folder system works (the folder system is weird too). The core packages follow this design aswell

This “weird” folder structure comes from an internal dependency management mechanism. Nobody manually sets up that _Index folder, it’s created automatically from a set of dependencies.

Imagine if two different parts of a large codebase depend on two different versions of Roact for Instance. The dependency management solution can’t just insert one thing called “Roact” because it needs to store two versions, but the different parts of the project would still like to be able to just reference the “Roact” that they depend on, so the stubs redirect the nice name “Roact” to the underlying “roact-17.0.1” or whatever that the dependency management system specified should be used by that sub-part of the project.

In this case it looks a bit funny because there aren’t multiple versions of or interesting dependencies between any of the packages, but that’s architecturally why it’s set up the way it is (automatically by the dependency management tool, which isn’t smart enough to notice that it could get away without using the _Index folder in that case).

The duplication is for sure an issue, which we are going to solve in the long run. However, this isn’t as big a concern as you might think: Roact contains about 100kb of script data total… that’s significantly less data than even a single 256x256 texture. Generally no matter how much code duplication you have it’s going to be a drop in the bucket data wise compared to the cost your art assets (between images, sounds, terrain data, etc).

Will we be able to host Q&A’s/live events like a live stream with this?

This, right here, is the best dev module yet.

Thanks for the clarification. Makes much more sense now.

which we are going to solve in the long run.

Im assuming this also applies to CoreScripts as well as all the templates using this sort of structure?

Also just a question, is this “dependency management tool” open sourced or is it private for just Roblox core scripts and other projects.

Also just a question, is this “dependency management tool” open sourced or is it private for just Roblox core scripts and other projects.

It’s not open sourced, but it’s nothing special. For comparison it’s very similar to NPM or the Wally package manager used in the Roblox open source ecosystem (use at your own risk, not officially affiliated with us).

This will help me with certain events for Multi Universe

(All jokes aside please just use standard ScreenGUIs, as this is a dev module which starters could look at and think “Oh this is the only way to make UI, got it” and keep that mindset)

i know right !! why do all these new modules have to have overcomplicated code

It should be for all types of events, keep us posted on your next live event!

Now this is going to be interesting.