Open Cloud Tools is a desktop application for Windows and MacOS that allows you to interact with Roblox’s Open Cloud API, currently focusing on the Datastore and MessagingService APIs. Open Cloud Tools supports viewing, editing, reverting, bulk downloading, bulk deleting, and much more.

Download the latest version for Windows or Mac on the Github Releases page.
Get the source code or report an issue on Github.

Thanks to user @Loominatrx for the new Icon and OP images. 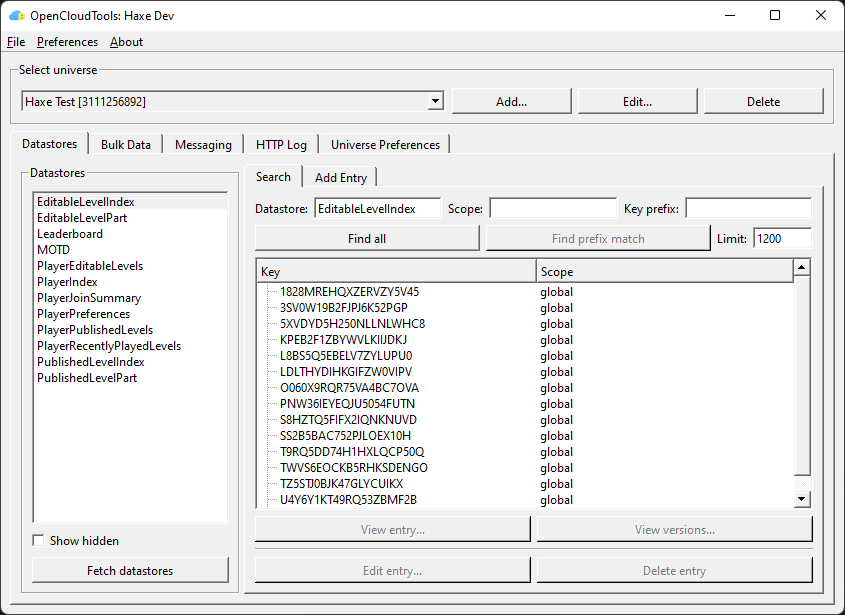 Send messages that your game servers can consume using MessagingService.

To create an API key, go to the Credentials page of the Roblox Creator Dashboard and click the “Create API Key” button.

The only permission available for Messaging is ‘Publish’, which is required to send messages.

The bare minimum permissions that the key will need to list and view entries are:

A read-only key can also optionally include:

The remaining permissions all allow modifying the datastore and you should give them out as needed:

A new release is now available, now with a Mac build. The Windows build has some small UI tweaks but no real new features.

Edit: Removed link so there isn’t an outdated build in the second post.

How does one go about installing this, can you provide links for installation or a video on how to install?

For windows just extract the zip and run OpenCloudTools.exe which is inside it. For Mac open the .dmg and drag the .App bundle to Applications before running it.

Isn’t this the same thing as any other ‘datastore editor’ plugin? Nice job though.

somewhat, but it allows you to edit it without being in Roblox studio

That tool is so useful ! Thank you for making this !

Right now it is quite similar, but it has a couple compelling features compared to datastore editor plugins.

I also plan on continuing to update this program as more OpenCloud APIs become available to cover as much as possible.

edit: I also posted a new bugfix release yesterday which should help anyone who was having problems with “response did not contain userids”

I will be adding more features around deletion soon, hopefully including fully deleting a datastore.

Unfortunately for the issue with deleted keys, that is just how the API works right now. After a given key has been deleted, it will still appear in the list until all of the old versions have aged out, which is about 30 days after the last update.

I was thinking on doing the same thing in Swift lol. Anyways great plugin for management. I think the UI interface could be improved, but I can also contribute to that

Just wondering, did you use C++ for this program or other language?

It is all C++, code is available at the github link in the OP.

Once again, a new release is now available.

Reworked main window to have a tabbed view with multiple categories of tools. 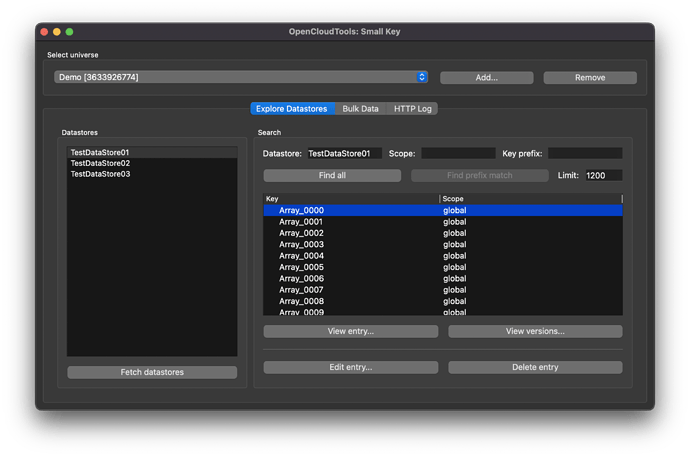 Added a bulk download option to dump an entire datastore to a sqlite file. 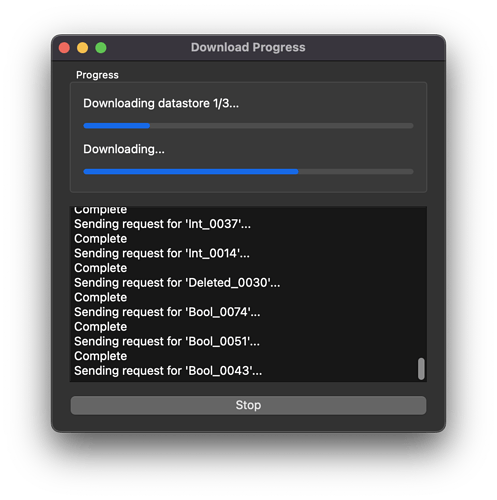 Added a log screen to show all sent http requests. 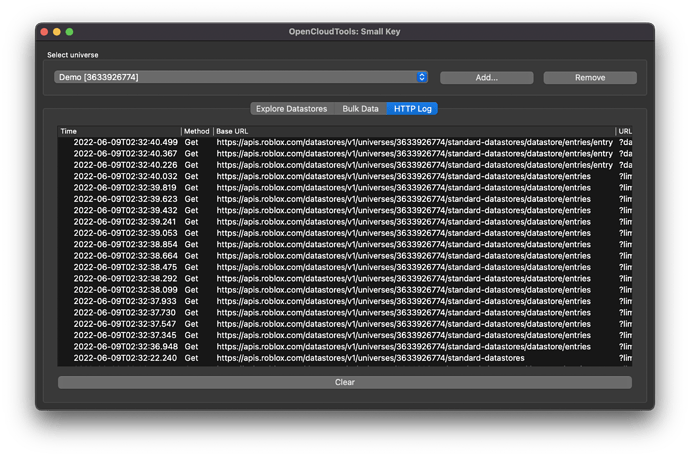 And most importantly, http requests were all being sent twice before, which has now been fixed. The practical result of this is that you will see HTTP 429 throttling happen about half as frequently as before.

The generated sqlite database has a single table named datastore with the following schema:

type is one of Bool, Number, String, or Json

data_str is only populated when the data is a string. This will be the decoded string.

data_num will similarly only be populated when the data is a number.

A new release is here again, this one notably fixes the “md5 mismatch” problem you may have encountered with the previous release. It also has some other cool stuff.

The main feature of this release is the new ‘filter’ option for bulk downloads. This allows you to download some subset of the keys in a datastore instead of all of them. 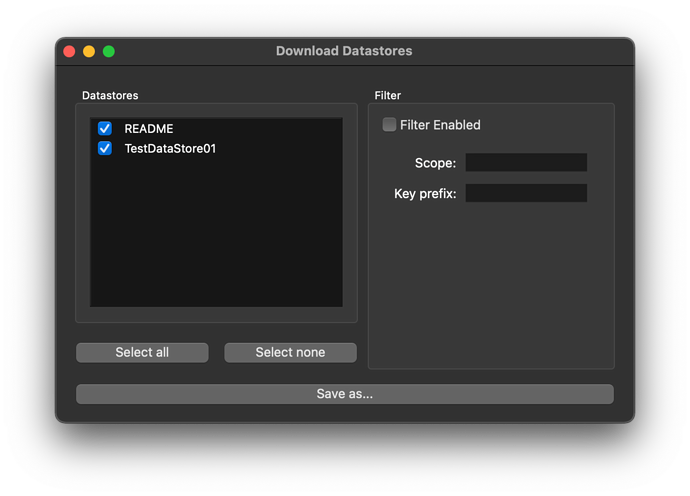 This release also has a number of smaller improvements and bugfixes, including:

Is there any specific way we update the current version?

There is not auto-update or anything built in. You just have to delete the old one and download the new one.

Would it be possible to add an export feature to transfer datastores between games?

Yep, that is planned for the future. Broadly, my goals right now are the following features in no particular order:

I can’t promise when any specific one will be added but I would expect to have them all working within a month or so.