Version 2.8.3 will be released in about 12 hours. This update will bring some important changes that may confuse players, and so we want to address these changes before they become implemented.

First Change: Ore Worth Indicator will be tied to the “Accountant” research upgrade and removed from VIP 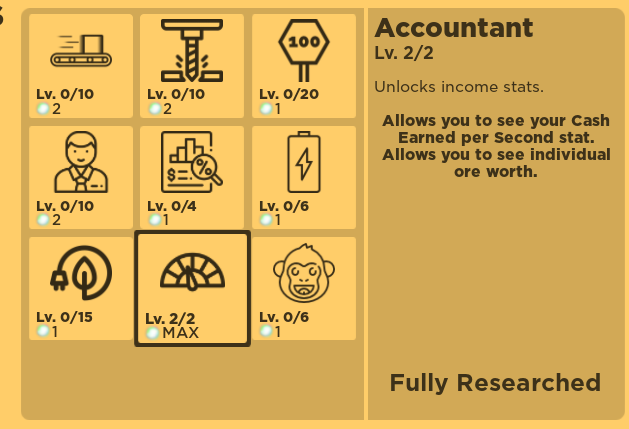 Back in January, we announced intentions to remove the Ore Worth Indicator feature from the VIP Pass and make it unlockable with the Accountant Research Upgrade. Subsequently, we removed this perk from the description of the VIP Pass. This change will finally be implemented in Version 2.8.3.

Because of this, VIP players will lose this feature until they research the second level of the “Accountant” refinery upgrade. As compensation, all VIP players before the 2.8.3 Update will receive an additional 5,000 Tycoon Bux. We understand that some may not agree with this change, and we apologize for the inconvenience. We cannot keep this perk available to all VIP players as we want to keep the NeoOrb shop completely free-to-play, and not removing this from the VIP pass would mean that VIP players receive an additional three NeoOrbs for their researching. 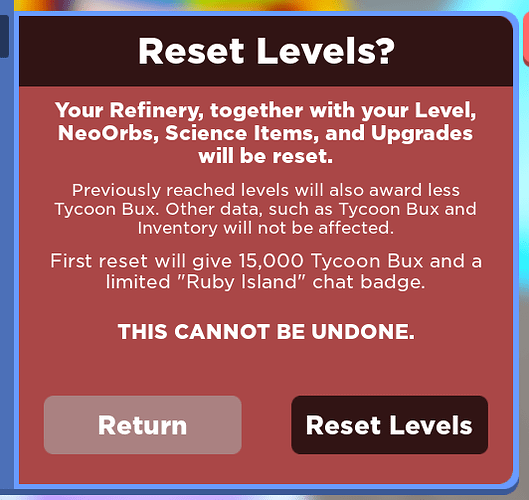 In Version 2.8.3, Level Resets will finally make a comeback. This mechanic will be unlocked at Level 20, and players will be rewarded with 15,000 Tycoon Bux and the “Ruby Island Badge” chat cosmetic which will be available for a limited time only.

Because the Level Reset mechanic will be temporarily available for Level 20 players, the “Back to Ore One” achievement which is obtained by resetting levels at Level 25 and above has been temporarily disabled. This achievement will make a comeback once the next expansion has been released.

With the readdition of this mechanic, the requirements for the Black Diamond Mine and Level 20 have been readjusted. We also want to clarify that after resetting levels, previously-reached levels will reward less Tycoon Bux. This means that unreached levels, such as 21 and above will not be affected by resetting your levels in this version.

That’s it for now for the changes coming to Version 2.8.3! See you soon, Tycoons!