Hello, I would like to launch ads for my clothing group tonight for 20,000 R$. My group is called “Neon Society.” I will launch ads on the actual homestore. Please feel free to take a look at it and let me know what you think of it. All clothes will be R$.

Will launching ads for 20,000 R$ tonight be good to profit at launch? Do less or more? If it goes well, I have a reserve 10k to spend on more ads.

Just as a heads up, your game might get moderated since you seem to have several copyrighted logos on your clothing. Here’s an example: 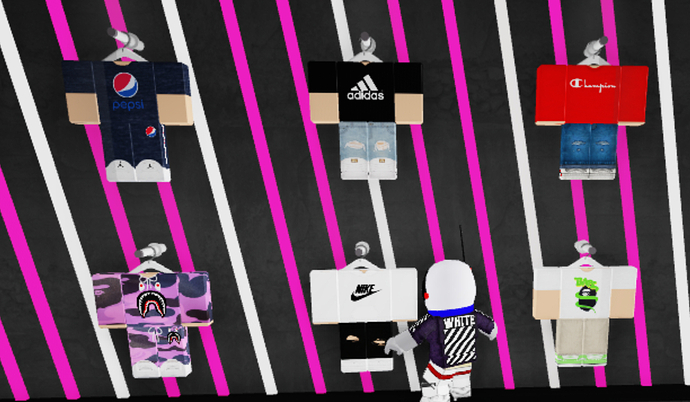 But I certainly believe 20k will get you a bunch of players, whether they will buy clothing is another story. Considering I see most of your clothing is only like 5 Robux, you’ll need THOUSANDS of sales to profit.

Thank you for the heads up but I’ve seen almost every clothing store with these same kind of logos? Also I agree a 20k launch seems to be a huge risk and thats why I’m worrisome. I’m not exactly sure if I believe in only launching ads for 1k either because then you don’t get many views.

Thank you for the heads up but I’ve seen almost every clothing store with these same kind of logos?

Just because others are doing it doesn’t make it right. The risk with clothing with logos is that if your game gets taken down, it means your clothes will go with it. If the clothes are content deleted as well, you’ll have an angry mob of angry customers coming at you demanding refunds. You should really thing if you really want that to happen.

Also I agree a 20k launch seems to be a huge risk and thats why I’m worrisome. I’m not exactly sure if I believe in only launching ads for 1k either because then you don’t get many views.

You’re overthinking the amount of profits clothing groups can make. They don’t make as much as you think they do, and most players that join your game from an ad will leave within a few seconds since homestores don’t interest most players. There’s some people that are obsessed with clothing, but most just play the real games on Roblox.

You should maybe spend 5k tonight, since it is your first time. After this 5k is spent and the ads end, you can go look at how much you lost or profited. If you didn’t earn over 5k back, then you need to go back and improve your clothing. If you earned more than 5k back, then you can maybe spend 15k tomorrow.

It depends on what the ad looks like and how it is portrayed.

Edit: What I mean is that ads can get clicks based on how it looks and how appealing it is. I would not recommend making ads such as “POPULAR YOUTUBER SENT YOU A FRIEND REQUEST” they get lots of clicks, but they are misleading and I believe against the terms of service

Putting 20k into ads right away is a bad idea.
As @cwd30 said above, homestores don’t make nearly as much as you think & you may run into copyright issues. Your clothes appear to be in the same type of category and I’ve seen dozens of adidas, nike and champion shirts just like the ones you have there.

Make your ad stand out as much as you possibly can. 30k on ads sounds like a complete and utter waste. The thumbnail of the game doesn’t appear to be anything super special or something I’d click on.

Have you thought of sponsors?

Homestores usually don’t profit, I’ve never seen one do so. People usually just buy the clothes off of the catalog

Not sure how much you spent on ads yesterday/today, but this isn’t very good stats even for a couple thousand Robux:

image1236×302 25.7 KB
You probably have some things that you will need to improve before you run your next ad.