More than a year ago, Roblox added rate limiting to RemoteEvents. I’ve tracked every remote I’m firing and I fire, at most, 8 per second. Considering I have games that fire remote events significantly faster than that, and that this code was previously battle tested in manners where it fires its own events perhaps > 30 times a second, this does not seem like something that should be occurring.

Removing the core scripts that I could (Sound and Animate) did not help either.

Does anyone know what the rate limit is on this? It feels ridiculously low.

This does NOT happen in Studio–I don’t know if the rate limiter is there in the first place.

I don’t believe it’s documented anywhere (a cursory glance at the devhub didn’t yield anything). Assuming you haven’t already done so, you may have more success private-messaging ConvexHero or another engineer who worked on the rate limiter directly.

I think you should be fine to be fair, is it possible to measure the delta time from last remote event and print it?

because putting this in the output is not helpful and even obscures actual useful messages. 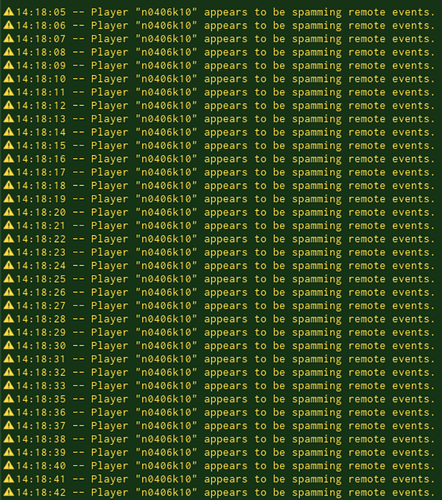 Was there a feature request ever written for this? It’s plaguing a project of mine.

It would be useful to replicate this behaviour in studio

You’re the programmer … make a catch for too many spams.
You know when a remote is set off and you know who did it.
How hard can it be …