I can’t reply in that subforum so I guess I’ll still have to put this here:

I think a good compromise would be to let pressing the x button work as normal, but leaving via the “Esc+L+Enter” shortcut would go back to the application. This would be good because those who actually want to quit Roblox don’t have to go through that additional prompt, and would stop the thing about having to kill Roblox through the task manager, which is a huge whiff.

I never find myself having to leave a game immediately and this is going to prevent accidental closing of the window or alt+f4 pranking.

The entire time I’ve played Roblox (way longer than this account has existed) I don’t remember ever closing the window by accident. Maybe once or twice while trying to click something in the corner, but never enough where I’d consciously think about it as a reason to add a modal. Plus, most games nowadays save your data on exit, so data isn’t lost.

Once you get Alt+F4 or Esc+L+Enter pranked once you tend to learn not to do it again, and now they can just say you have to mash that key combination instead. Also, most players are on mobile, so it’s really “hold the power button and the home button for free robux” or something like that.

Before people pile on any more feedback here: The internal discussion on this has been reopened.

Awesome! I understand Roblox wants to drive more people into the app, but violating windows norms is not a great way to do that in my opinion.

There’s tons of other creative options. For example, Roblox could add tabs like chrome to the top of Roblox’s app, without taking up much more space. Or a variety of other UI designs.

I’d also be fine with this update if there was a big “do not show again” checkbox.

Excuse me giga,but all you just did was hijack the X button for more players and kids to stay on your platform. This is horrible, but you just hijack the ALT + F4 key too?!?!
This is annoying and NEEDS TO BE CHANGED, or else i will quit roblox.
The feature left people complaning and you want kids and teens (and adults…) to force you to get on your desktop app. What is this behavior, roblox?! Just let us out of this windows UX nonsense! We need a feature to opt out of this. Roblox is now violating windows norms, and i dont like it, so i dont support people who break windows norms. We understand you want more people into the app, but it cant be done like this.

I mean, the weirder thing is it’s actually happening mostly for people who already have the app. But instead of asking about unsaved work, they’re repetitively advertising your ability to go to other games without closing the app, which is a good feature but they display the prompt even if you’ve “explored more Roblox” through the app for the past three weeks (or months)!

I’m glad to hear that. I’ll chime in that I expect ALT+F4 to close any program I press it on, as immediately as is reasonable, every time.

I get that the “X” button may be a design choice - someone may press the X during a game without realizing it will close the entire Roblox app. Especially with the transition from website navigation to app navigation, it’s a concern that I understand.

The optimal solution for me would be a setting in the client that lets me toggle the behavior for the “X” button, maybe with a link from the confirmation window to that setting for users that want to change it. Thirty seconds for a mockup to show what I mean: 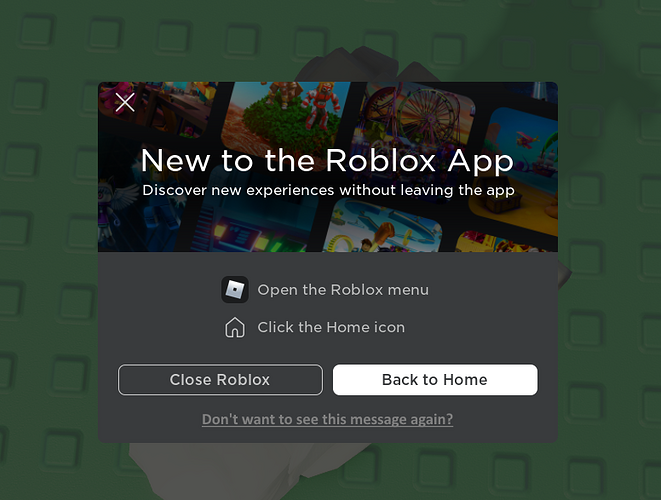 mockup777×587 361 KB
(the hyperlink leads to a Settings page, where confirm-on-close is on by default)

But, again, ALT+F4 should ignore this setting. It should never ask if the user is sure. They pressed the “kill program” command - they’re sure. I sometimes exit other applications by accident, but they don’t always ask me to confirm. It’s not a common enough problem to justify the extra step involved in closing the program.

I’m probably not going to quit Roblox if this isn’t changed, but it runs counter to the way I expect Windows applications to behave.

Another thing that does not make sense: When the disconnected screen appears for any reason, if you click the close button instead of the “leave” button, the “explore more” prompt still appears but it’s blurred and not readable because it’s behind the disconnected window. You should not have to click close on any Windows application only for something else to pop up that you can’t even read or click on; if you did, I’m pretty sure you would normally think you got a virus.

This likely deserves it’s own bug report and is likely related to the fact that the Core GUI blur object blurs everything except for the disconnected prompt.

I would prefer to be disconnected and not have blur in the way, much like the old, red design. Though I also like the buttons.

This would specifically be for custom messages/dialog boxes when the user is disconnected, instead of Roblox’s. I’m not sure why this isn’t implemented already, but it would be a great feature.

I actually came across some bug in a game (The Labyrinth, to be specific) where if you view someone’s avatar off the player list, the entire app becomes unresponsive and freezes up. Before the update with the close confirmation, if I tried to replicate the bug, it still happened but I was able to close Roblox with Task Manager.

Closing the tab is impossible with the prompt coming up. For some reason I was unable to Alt + F4 out or use Task Manager to force close it. It acts like an admin password prompt; you can’t do anything until you enter it/interact with the password box itself, and of course I can’t when said app/in this case, Roblox, is frozen.

I can’t describe it in terms you probably wish I could but it’s just something that’s happened 100% of the time for me. My apologies

I really wish to know why this prompt is intended behavior…

That button actually used to be there. There was a checkbox that said “Don’t see this again” and it was removed in the second beta.

I just tried one of the event pages if I clicked home.
It’s giving some strange error saying a program isn’t installed. 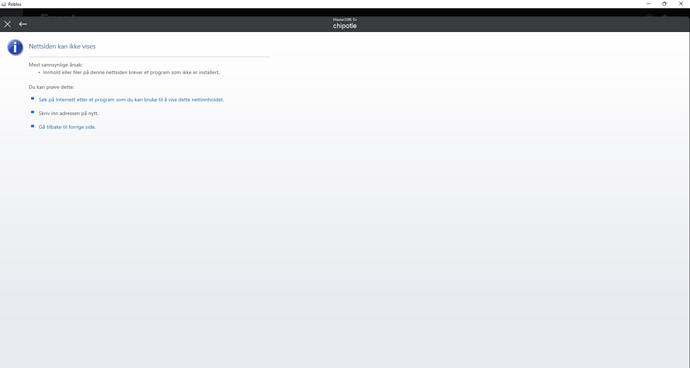 The worst part about this is that it somehow shows this popup even if you try to close it with the task manager:

If this is intentional, then Roblox does have some very weird intentions

I believe this is intended. Happens to me when I click the X on Windows 10

At least give me the option to never see that menu again.

Really bad UX design. I don’t press Alt+F4 to be prompted with anything, I do it when I’m trying to close the window. If this is meant to help people who are new to PC not close the client by mistake, fair enough, but like @MrChickenRocket said, we should at least be able to click a ‘Never Show This Again’ option. Nobody appreciates this change.

I’m unbothered by being promoted when pressing the X button but Alt + F4 should always immediately kill the program, not have an annoying popup marketing/growth begged for in spite of UX.

It’s very hard to accidentally press ALT + F4, and ALT + F4 pranking is something that you will only fall for once.