Questions About Building A City

Hello fellow developers, i am making a city and was wondering about a few questions about city building here are my questions

How do you make a city feel bigger than it actual is?

How do you layout your city to make it look less symmetrical and ‘blocky’?

If I was to make my city out of parts instead of textures how would it affect
performance?

As a builder how do you plan your city?

What color themes do you use in your city builds and why? Do bright colors work well in all types of cities?

like… it all depends on what you’re making, you can duplicate some buildings and recolor them but don’t make them like next to each other, add some unique touches to the city, for performance I would say you could use meshparts to reduce the lag (instead of multiple parts merged together) and the coloring really depends on what style your going for, and the lighting gives more life to buildings so that’s another thing you should work on, those are my opinions but it would be good for you to have like a example you’ll look up to, good luck!

if you use alot of them they can

with building simple things you can just stick with what you got in studio, meshes aren’t as important but instead of like 20 parts, having one mesh with a texture is a bit better (at least from my own experience)

my city right now is not great, its very bright at night, i will take these suggestions into consideration.

not a very great artist, i usually use reference images and whats in my head put together

To answer your first question: How do you make a city feel bigger than it actually is?

To answer your second question: How to layout your city to make it look less symmetrical?

To answer your third question: Making a city out of parts affect performance?

To answer your fourth question: As a builder how do you plan your city’s?

I begin with looking at city examples on the internet, I will then determine what style I would like to introduce into the build. This keeps my builds original, but also adjusted to fit my style.

To answer your fifth question: What color themes do you use in your city builds and why?

To answer your sixth question: Do bright colors work well in all types of cities?

I would say it depends on the type of city you are building. Currently I am building a city that is inspired by many midwestern cities, and Las Vegas, so my layout is going to be a grid. In fact most American cities are on a grid layout.

Now, while you’re worried about the city being “symmetrical and blocky” that is sorta the name of the game regarding a city. A great reference in city planning would be the youtube channel City Beautiful, which is a city planning enthusiast who loves to go through and detail city styles. Some suggestions I have to make it feel less “blocky” would be to have roads which are at a different angle, or have a radius. Furthermore, you can use big landmarks such as a highway to break things up too.

As for making the city feel bigger, make the roads narrower, the actual city may be small, but buildings will be closer to each other, creating that city feel.

I also agree with using textures, and that is what I do personally.

As for planning, I like to break my city into sections and build out a few blocks, but also keep in mind generally what will be adjacent to those.

Layout of my city so far, I also included a link if you wanna check it out. 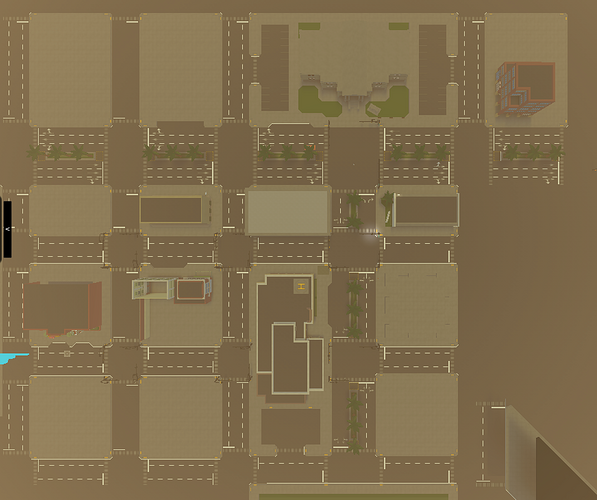