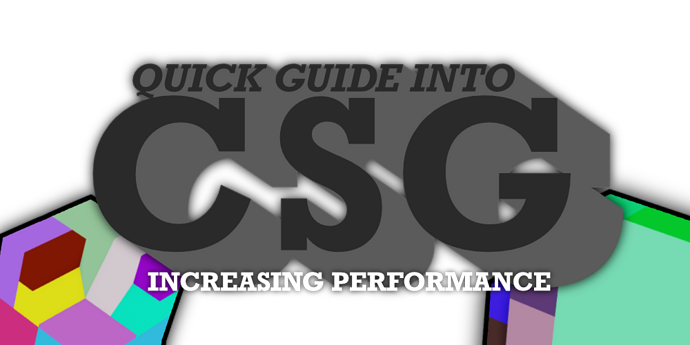 Untitled1000×500 123 KB
Hello! I'm unidentifiedchris, this is my first Community Tutorial! I hope it has a nice approach. I am unaware of any other tutorials regarding increasing performance of CSG (Unions, meshes, etc.) So I will walk you step by step into how to increase your games performance by changing the CSG of your unions and meshes. In a part two of this I will also walk you into improving performance of meshes with your 3d modeling software. I will make these drop down menus so you can choose whatever you wish to have! I hope this is good enough for you all to understand, so here we go!

To first understand how CSG can affect performance in your game we first need to understand it.
Constructive solid geometry, or CSG is what unions are, whenever you make a union you make a complex shape, this shape has several different parts, this all depending on the complexity of your union. There are two supported kinds of CSG by Roblox, unions and negates, there is a third kind of CSG which Roblox doesn’t support which is intersection. We can deconstruct CSG in binary trees, for example, if you grab a Part and a NegativePart, you will have 2 parts, you can de-construct these in a tree the components of these being:

With this image in mind you will have a further understanding into how unions may lag your game, as more complex your union gets the more leaves this tree will have, picture each leave as something that the player has to load in every time the game starts, this is the same case with meshes, but we will be covering them later on this tutorial. So if you really want to increase your performance it all goes down into the quality of your CSG, if your CSG is poorly made then it will lag your game, if there is no room for simplifying your unions even more, follow the next steps.

A year ago Roblox introduced Level of Detail for MeshParts, this was later on implemented into all meshes and unions.

We’re excited to announce Level of Detail (LoD) for meshes. You can now choose to render MeshParts at different resolutions depending on the distance from the camera. There are 3 levels of detail: the original mesh and 2 automatically-generated lower-resolution levels, each with about half as many triangles as the next level up. Resolutions switch from high to medium at 250 studs from the camera, and from medium to low at 500 studs. To activate mesh LoD, set the RenderFidelity property of the M…

You can locate this property on RenderFidelity, the default for this is Precise, but if you want to increase performance make it Automatic. What happens when you set it to automatic is that whenever you get far away it won’t have the same amount of detail as it does when it’s close. So for example, a mesh may be 100 triangles, but if you get very far away it will go down to 10, this is why I only recommend to change the RenderFidelity property in cases where you don’t really need the mesh/union to be visible or if it’s a very unimportant detail, specially if your game contains a lot of these. 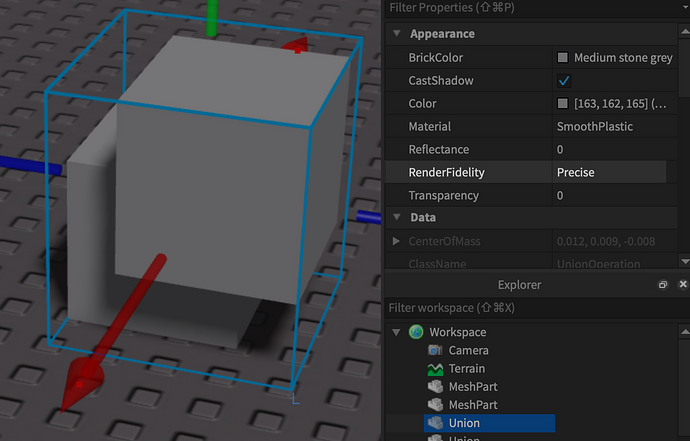 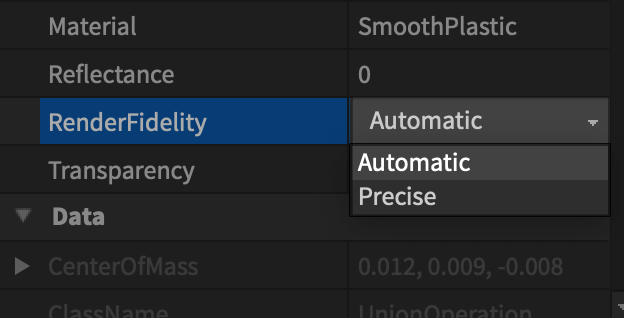 You can also decrease the LoD of meshes in Blender, I will be walking you through this in the part two of this tutorial

Apart from rendering, collisions are another very important feature if you’d like to improve your game performance, for this I recommend activating the ShowDescompositionGeometry setting in the settings tab, although another way to do this is to get @maximum_adhd’s plugin Show Descomposition Geometry which can change this setting with a single click. This setting toggles the physics model of your unions and meshes, every single colored square is a collision that the client has to load in, like we talked about in the first section about loading in and physics. Roblox currently supports 4 types of collisions.

You can locate these in the property CollisionFidelity in your properties tab under behavior. 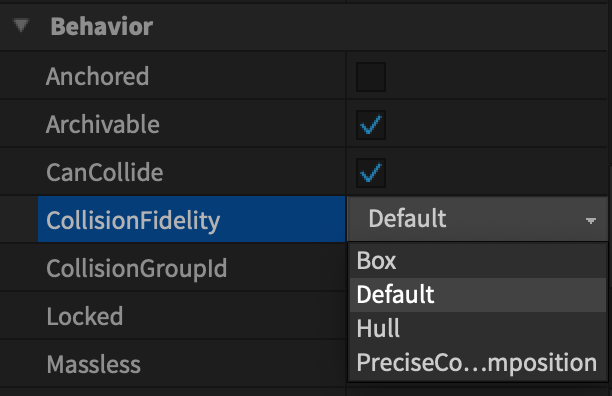 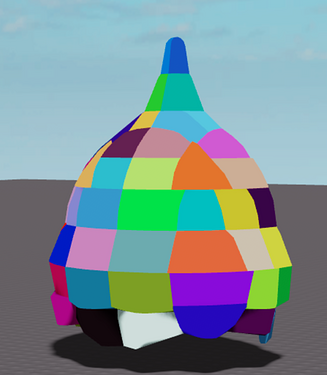 Hey all, I’m excited to announce that something I’ve been working hard on for what seems like a long time now is available for use in Roblox. MeshParts and PartOperations now have “CollisionFidelity.PreciseConvexDecomposition” as a newly available CollisionFidelity setting. [image] This new setting prioritizes respecting the surfaces of whatever geometry you ask the system to generate. As some of you may know, the Default algorithm we use tends to lead to strange results, such as doorways tha… 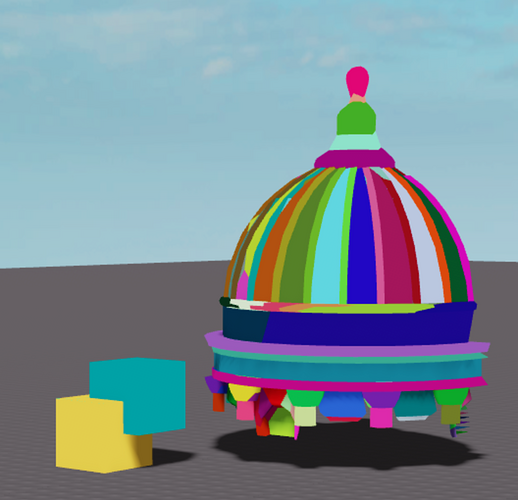 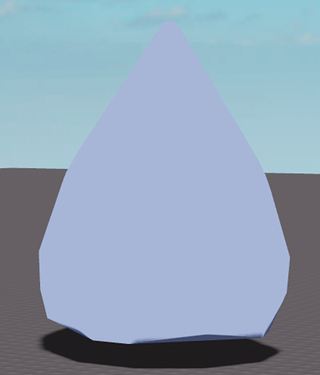 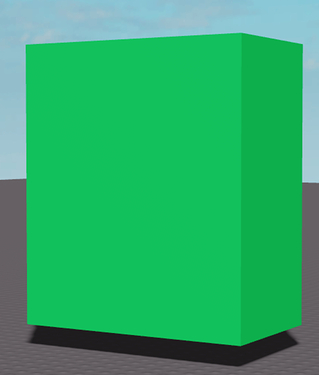 image960×1126 174 KB
Ideally, you want to have as less collisions that the player has to load in as possible, but this all goes down into gameplay and what collisions you are changing. So whenever a collision is not needed, simplify it by making it using the hull or a box collisions.

Thank you all so much for reading, try to give me feedback into how my tutorial was, in what I can improve, or just your opinion since it’s my first tutorial, all feedback is appreciated. I will make a part two of this tutorial depending on the feedback generated by it. If this tutorial helped you please leave a like!

58 Likes
Why Meshes Are Superior To Unions And How To Easily Convert Them
Performance considerations, improvements, and optimizations when making a game
Union or Model, Which one is the best
Does creating unions slow down your game?
Why Union Models is not appear?
Roblox Studio solid modeling is good or bad?
Performance Question - Parts or Unions
Ideas For Lag Reduction
mer5000 (mer5000) July 20, 2021, 12:53am #2

this is a great tutorial, thank you for it.

Its a great tutorial, but a link to the second part would be much appreciated.