Note: If you want something simple this can be super simple, but all the docs below are also for advanced users

Quicks is a plugin that lets you type short “commands”, and it will generate the full code.

How does this differ from other snippet tools?

This one is different because it’s more than just simple snippets. This one has many other features like importing module scripts by name(it will find the one you want and import it), generating arrays of any size auto-filled with anything, as well as auto importing services when they are not imported, and smartly using already imported services to get module scripts instead of making its own. On top of that, it supports you to make your own snippets that range from just simply replacing text to analyzing the rest of the document and making smart decisions. Making your own “commands” is simple, and contains a built-in API for doing more advanced things that you might not want to code yourself. In short, it’s smarter and super easy to extend.

I still do recommend taking a look at other tools, because they have their own advantages like a nice UI that might be a little more beginner-friendly when adding your own commands, but this does limit them to very basic functionality(almost like a copy and paste).

Note: To use this you need to enable the script editor API under beta features, and also when installing the plugin allow the permissions it needs like “Script Injection”.

To use it just install the plugin, and then if all settings are on default settings then you can start by typing “>”, this is the default opening character for all commands. Then just type a command after that. Eg. “>GS(Players)”, will get the player service after hitting tab after the last character on that line. It should look like this: local Players = game:GetService("Players")

Note: commands are case sensitive unless you edit that in “Quicks Config”

That is all for now. If you have any suggestions for commands or improvements feel free to tell me.

How do I add my own commands?

You can add your own commands by finding the module script named “Custom Quicks” if it’s hidden try typing >show in the terminal (You can also use >hide in the terminal to hide both of the plugin config files). Once you locate this file and open it you will see this:

Note: Naming your command the same name as a default command will overwrite it

This already has a custom command in it called TEST. To try it out you can do >TEST() or >TEST in another file, and it should replace with what’s in that return statement. To change the name just change where it says [“TEST”] to whatever you want your commands name to be. Then inside func, you can code whatever you want it to be replaced with, not limited to plain strings. If you want to make more than one custom command you can copy this:

Then add that below where the test command ends.

So what are all these parameters in the function?

Utils (For making your own commands easier and faster)

There are many helpful things under the Utils perimeter when making a custom command.

Renaming commands is simple. Let’s say you want to rename the GS command to GetService. To do this you would do the following:

First, we are overwriting the default GS command so that it does nothing. Then we are making our own GetService command and just telling it to use the default GS function.

Get The Plugin Here

Update: major bug fix.
This bug seemingly got pushed to a later patch update. This made it so the plugin couldn’t init properly, and that made the plugin not work at all. This should be fixed now, tell me if you find anything else.

This plugin is very useful, maybe add some more defaults.

When using spaces in names of instances it will try to make a variable with spaces when using >MS() I know using spaces isn’t smart for instances but maybe a thing you should fix.
Off topic: I don’t use spaces, was just for testing purposes.

Also when using >show maybe print something to say it was success, some people don’t have an organised game and spam it because they don’t see it.

I would recommend using this to save custom quicks and the config:
Plugin:SetSetting()
Plugin:GetSetting()

I made a custom quick that makes a killpart.
How to use
1: Run >show in the terminal if you haven’t done this yet.
2: Paste the code (seen below) into the Custom Quicks module script. Place it above the last comma(highlighted in the screenshot) 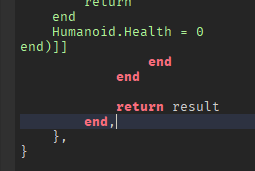 3: Use it like any other quick. (>KILLPART(Part))
Notes
-You can also use multiple instances but I don’t recommend it. (Use CollectionService instead it is a lot less messy with 2+ parts)

-This is just something quick to learn the api.
Code

Hello. I am planning to add more. Also ill have to investigate the space bug.
What was the exact “command”/quicks that you ran?
Was it >MS(Module Script)?
After some testing its probably that, I will add this to my list of bugs to fix.

Also it does use
Plugin:SetSetting()
Plugin:GetSetting()
They save when they are modified.

Yes, it was exactly that.

Also it does use
Plugin:SetSetting()
Plugin:GetSetting()
They save when they are modified.

Fixed bug where spamming >show would create multiple of the same config file. This would confuse the plugin.

How do I install modules through it?

In the command line you can type >install (module name)
To execute it add a space to the end of the command(this is a limitation of custom terminal commands, ill probably be moving most commands to UI soon.) 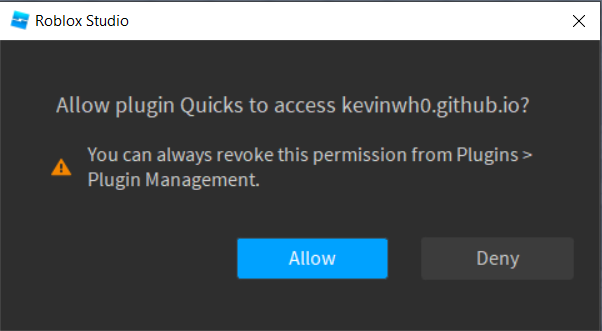 Modules are things you can install to gain a bunch of new quicks. A module can contain 1 or more quick.

Warnings on this feature

No there shouldn’t be any viruses since when commits are made to the repo it will go though a verification process. The issue is if there is already a quick with the same name it may conflict. In the future I want to make it check for this, but for now open the file and make sure there are no issues. Rename any commands that are conflicting.
Another issue is that if your last curly brace in the return doesn’t end in a comma it will just append the module without adding one. You will need to add one manually.

How can I make a module that can just be installed?

So whats my module name?
Your module name is whatever you named your folder. (It cant be named the same thing as another folder, all module names have to be unique)

If you cant figure this out, or don’t have a GitHub account feel free to reply to this or contact me, ill put it up for you if you send the code.