Realm Rush: Tower Defense, How Do I Make It Succeed?

Hello, I am the founder of Dreamers & Creator / solo-developer of Realm Rush: Tower Defense (RR for short). And frankly, after making Roblox est. $500K USD I’m close to quitting my game.

This post is premised on giving a quick biography, my personal opinions, and then I pass the question off to you. Considering how trigger happy mods are I won’t be surprised if this gets taken down.

I’ve made multiple posts throughout the years here on the forum to ask various developers their constructive criticism on how to make RR more appealing and retain players. How to make it more successful. It has more of nearly everything compared to my competing Tower Defense games. It has more content, more depth, higher quality in product quality and graphic quality.

It may not be perfect, but objectively it is beyond superior than any TD game I’ve seen on the platform in almost every category a game dev cares about. Except the most important one…

Player count. Back in 2020, as one of the first Roblox Tower Defense games, and when the game looked like a pile of hot garbage, it pulled 2.4k players on good days as its peak. No really, it was an amateur mess.
Now incredibly polished and improved I can barely scratch 300 players with ads and sponsors. Roblox used to feature my game on Top Rated, Featured, Most Engaging, etc. Now it often doesn’t even show up when you type in Tower Defense in the game search. Roblox doesn’t feature my game anymore. Ever. It’s like they shadow-blacklisted it.

What am I doing wrong? Throughout the years I’ve done nearly everything everyone has suggested:

… and so much more I could write a trilogy about it. I’ve even had top developers of front page games offering advice & help as well.

Common critique sentiments. Everyone whom I’ve seen comment on the game has said that it’s underrated and should have way more players. I do not exaggerate, that comment has become so common it scorns my very soul. Some of these people are whom don’t even play the game or like the game personally (either they’re not into TD genres, or prefer modern aesthetics which is fine!). The compliment is nice, but I am stuck in this purgatory of being told it should be more popular and get better ratings, working super hard so it might, but it just never does.

I’ve worked super hard as a solo developer for 4 years on RRTD to make what I personally consider a Roblox masterpiece. And 200 daily CCU is my reward. Yet my competitors who quite literally slap together SmoothPlastic blocks and freemodel guns and copy/pasted games pull 1k, 5k, 15k, 25k CCU on an average SLOW day.

Disadvantages I know I had handicapped myself from the game design I chose during the beginning back in 2018. Handicaps like: RR doesn’t manipulate kids, it doesn’t target kids, it doesn’t use gambling tactics, and it doesn’t use mind-numbing bright ugly colors. And last of all, it’s a high quality graphic game on a game platform that is notorious for having an incredibly weak game engine.

But if Roblox were smart they would utilize & promote games like RR that target an older demographic and turn that niche-to-Roblox demographic into a broader audience. Most people with real money play on platforms like Steam, Epic, Origin, etc, all of which have a much older audience. My game makes crazy money, way more than top 25 games on ARPU charts- when it’s popular. These numbers were before a HUGE update with only ~1.5k players! 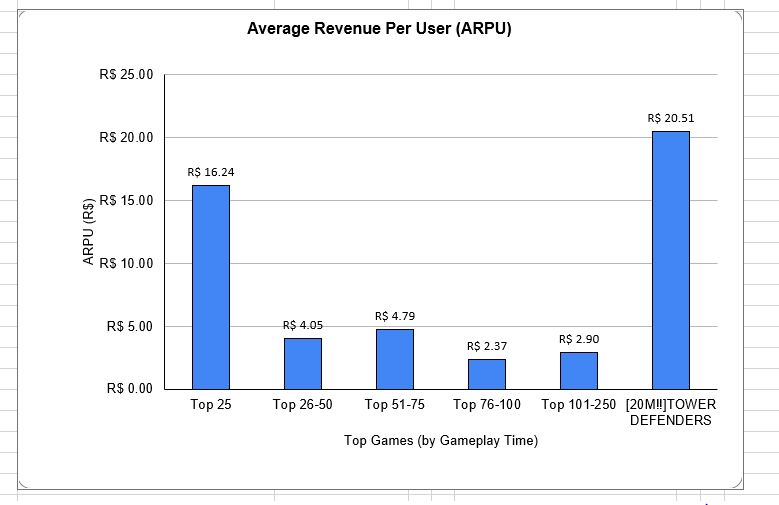 Every Roblox dev knows most teens, young adults, and adults won’t touch Roblox because all they know it to be are games like my competitors. Like 75% of most games on the platform: cheap knockoffs of successful Steam games, kid games with smooth blocks and bright colors, copy/paste simulators, and ridiculous engine performance restrictions. Roblox needs to actually promote games (like RR) that trendset and actually provide entertainment & interest for an older and much MUCH higher paying demographic.

Roblox has to be fully aware of the statistics that older demographics pay better, play longer & more often, and make up a much greater & more reliable majority of the total gaming industry. I can’t make RR popular or successful if Roblox refuses to promote games on the platform that interest that lucrative older demographic.

In conclusion: I am at my wits end. I’ve given this platform 12 years of my life, RRTD 4 years, and Roblox ~$500k USD. And as of today all I have seen in fruition is check-to-check income, 200 avg CCU, no communication or support from Roblox, and the shame of all of my hard work making negligible impact on RR’s overall success.

Should’ve just made a Simulator. How droll.

How do I SAVE Realm Rush: Tower Defense?

200 CCU and $500k USD over the course of 4 years isn’t something to sneeze at. It is very impressive, extremely for a solo developer during this age.

I believe the lack of a greater population in the current year could be due to a lack of extremely popular content creators. The genre has a lot of competition, so each tower defense player has their attention divided into their favorite games in the genre, new ones they would like to check out, and those they ignore.

However, that does not account for why there isn’t a greater concurrent player count. 300 players could theoretically balloon into a higher concurrent count, but the game must be missing something. Or, it is possible that the game is a bit too complex, leading to a lower amount of players sticking around compared to games. There could also be an onboarding issue, where new players could get confused and the like.

These are all guesswork, as I have not played your game, but I have looked around for your game on youtube and your game page to see how popular it is on there. Good luck though.

I want to clarify, I have never achieved numbers near yours so take my advice with a grain of ‘unproven theory’ salt.

I would work on a massive UX overhaul, Make the game as intuitive and quick as possible, Make everything about every UI piece as polished and satisfying as you can. This would add another layer of polish that is way more powerful than underlaying scripting and behavioral tweaking, UI/UX is immediate to the player, your goal here is to make everything fluent, responsive and fast.

Breakdown of that last statement :

Every UI element should be fluid, Hover on a button? make it animate, give it a sound, etc. Make it feel ‘alive’ This also touches on the responsive part, Everything should respond to the user, giving them direct feedback.

you want the UI to be as responsive as possible when it comes to doing what the user expects, press a button, have something popup as fast as possible without sacrificing fluidity. However this can also mean reducing the amount of clicks to do major tasks, joining a game? 2-4 clicks is the max, etc

Im doubting this will be helpful for reviving playercount but it will very much help you regain older players from competing games (TDS, TB, etc)

This is insane, and Roblox should do something immediately. The same goes for the Jerry games!!! The main Jerry game didn’t show up in the search list, so meanwhile YouTubers were promoting his game, he had people go to these remakes that had that classic tree house.

I actually feel for you, this is a mess. If Roblox’s recommending system doesn’t work, then there should be game reviewers and give them permission to put a check mark on certain games so people know they’re official plus official games would be ahead of all other games renamed after it.

Just keep trying, this can blow up eventually, since if Tower Defense Simulator doesn’t polish and fix some of their bugs soon, they’re going to lose popularity, and possibly shift some popularity to you too. But maybe changing the name would help you out, since people don’t search up, “Realm Rush” that often.

I’ll even try out your game and support it too.

Your game isn’t dead, it’s not even doing that bad.